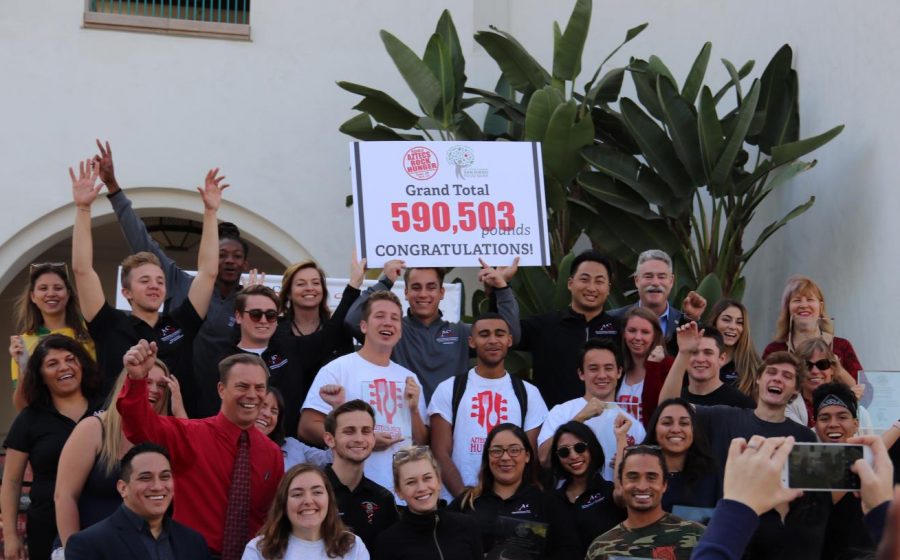 Students, faculty and community members who worked on the Aztecs Rock Hunger celebrated a record number of food donations in the student union on Nov. 15.

The Aztecs Rock Hunger campaign made it out big this year in food donations, surpassing all previous years’ totals and setting a university record.

In an announcement made to students and community members on Nov. 15 in the Aztec Student Union, Associated Students said the campaign managed to collect 590,503 pounds of food for the Jacobs and Cushman Food Bank, slightly exceeding last year’s total of 588,915 pounds.

“I am really happy with the result,” Gamble said. “It wasn’t our goal of 700,000 pounds, yet we were still able to have a record-breaking year which is incredible. I am so thankful that we were able donate to The Jacobs and Cushman Food bank and make an impact.”

Students and associations on campus were able to donate to this cause between Sept. 28 and Oct. 21 of this year. For every dollar donated, the food bank provided six pounds of food for San Diegans, according to the Associate Students website.

Aztecs Rock Hunger is an initiative created in order to combat food insecurity across the San Diego region. The university partnered with The Jacobs & Cushman San Diego Food Bank to collect food and money for the cause. According to a university press release, the partnership has donated more than 2 million pounds of food since its start in 2010.

James Floros, president and CEO of Jacobs and Cushman, said the Aztecs Rock Hunger campaign is the largest single food drive in San Diego County. He said the partnership between the university and the food bank is considered an outstanding effort to help the community.

“Food insecurity is a horrific problem in San Diego County,” Floros said. “Getting 600,000 pounds of food, that is probably close to 400,000 meals. So, this is a great partnership that goes a long way towards helping us provide the food to people that need it.”

According to the A.S. website, food insecurity is a widespread issue that affects 15 percent of San Diegans.

Beyond the record-breaking numbers, A.S. Executive Vice President Nick Wohlman said this result is considered an extraordinary achievement considering the impact this food will have on helping the community.

“I think, regardless of what the number is, this cause is so important and so amazing,” Wohlman said. “We are making an impact in communities here in San Diego. Obviously, breaking the record again is incredibly hard and they did a great job.”