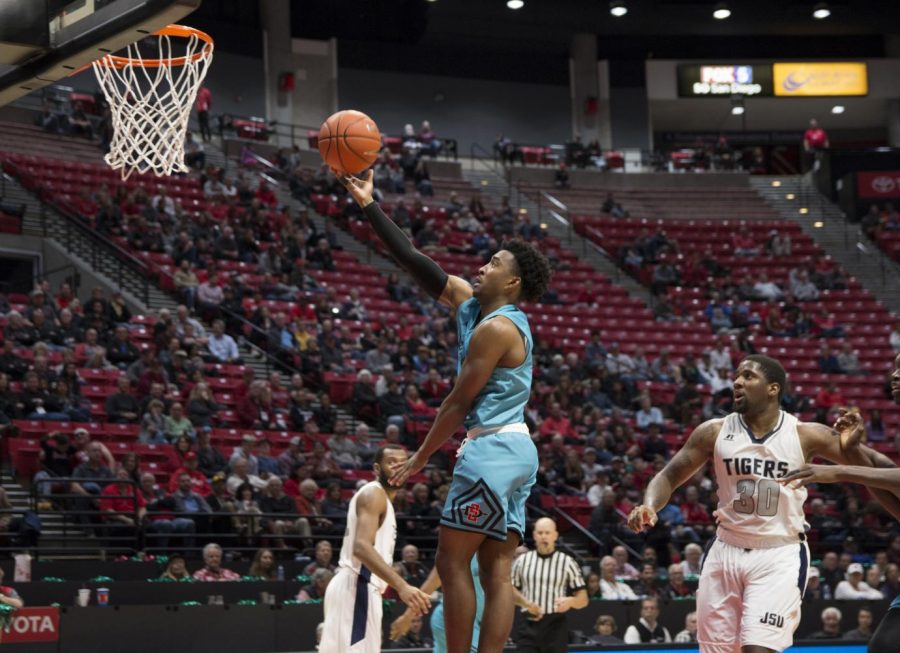 Senior guard Devin Watson goes in for the layup during the Aztecs' 87-44 victory over Jackson State on Nov. 27 at Viejas Arena.

San Diego State men’s basketball returned in triumphant fashion to the friendly confines of Viejas Arena, defeating Jackson State 87-44 in front of a crowd of 10,453 on Tuesday night.

SDSU (4-2), just six days removed from competing in the Maui Invitational in Maui, Hawaii, scored the first 11 points and never trailed in a wire-to-wire victory over the Tigers.

In Maui, SDSU came away victorious against defending Big East champion Xavier, but struggled in losses to Duke and Iowa State, falling by deficits of 30 and 26 points, respectively.

Head coach Brian Dutcher said the game was a chance for the Aztecs to show what they were made of, following tough defeats.

The battled-tested Aztecs showed no ill effects against the Tigers, looking resurgent while jumping out to a nearly 30-point halftime lead.

Jackson State (1-6), meanwhile, looked like a team that could end up being bottom-dwellers in the Southwestern Athletic Conference, finishing the game with more turnovers (23) than made field goals (15).

Still, Dutcher gave credit to the Tigers and said the Aztecs’ performance is not an easy thing to do against any opponent.

“It was no small feat to just come out and do what we did,” Dutcher said. “People just expect it, but we played pretty well to create opportunities.”

The Aztecs had five players finish in double figures, including 15 points each from sophomore guard Jordan Schakel and sophomore forward Matt Mitchell.

Both Mitchell and Schakel were in double figures by halftime and combined for five of the Aztecs’ 10 three-pointers (on 20 attempts) in the game.

Mitchell said the team took a different approach to the Tigers, after coming back from two tough losses in Maui.

“You learn a lot about yourself and about your team. I think it was us taking it personal. And today I think we took it more personal than we did in Maui,” he said.

Still, Mitchell said the big victory doesn’t make up for the last time the Aztecs were on a basketball court, staring at a 30-point loss.

“We always want to play with a chip on our shoulder. We want to leave it in the past but we never want to forget that it happened,” he said. “We are inconsisent a little bit, so moving forward, we know we need to be better.”

One potential weakness for SDSU was holding onto the ball, with the team committing 21 turnovers, only two fewer than the Tigers.

“It’s just mental. It’s kind of a mental thing not to make a turnover and to make the right play, not to travel, just things we’ve got to excel and improve on,” Mitchell said. “I’m sure once we watch the film, we’ll see our mistakes and we’ll make the corrections.”

SDSU went into the break with a 49-21 lead, making six of its last seven field goals and building a lead as big as 31 points, following a three-pointer by Schakel with 49 seconds left before the break.

Schakel said the team showed up to play and credited the defense with getting the Aztecs going.

“Our energy was great this game, starting on the defensive end, and I think that really triggers everything for us,” he said. “When you play hard and you play the right way, things tend to fall in your favor most of the time.”

The Aztecs shot 51 percent from the field, compared to just 26 percent for the Tigers.

Jackson State ended the game hitting only one of its last 18 shots, contributing to the team’s poor shooting numbers, after starting the game just 1-for-8.

SDSU, meanwhile, went on an 18-4 run to end the game, adding to the lopsided final score.

The Tigers’ second field goal did not come until nearly nine minutes into the game, after a three-pointer by redshirt junior guard Jesse Love cut the Aztecs’ lead to 16-5 with 11:11 to play in the half.

In addition to the fast start, SDSU used runs of 8-0 and 13-3 to build on its first half advantage.

Next up for the Aztecs is a Dec. 1 trip to Illinois State, where they will take on the Redbirds of the Missouri Valley Conference.