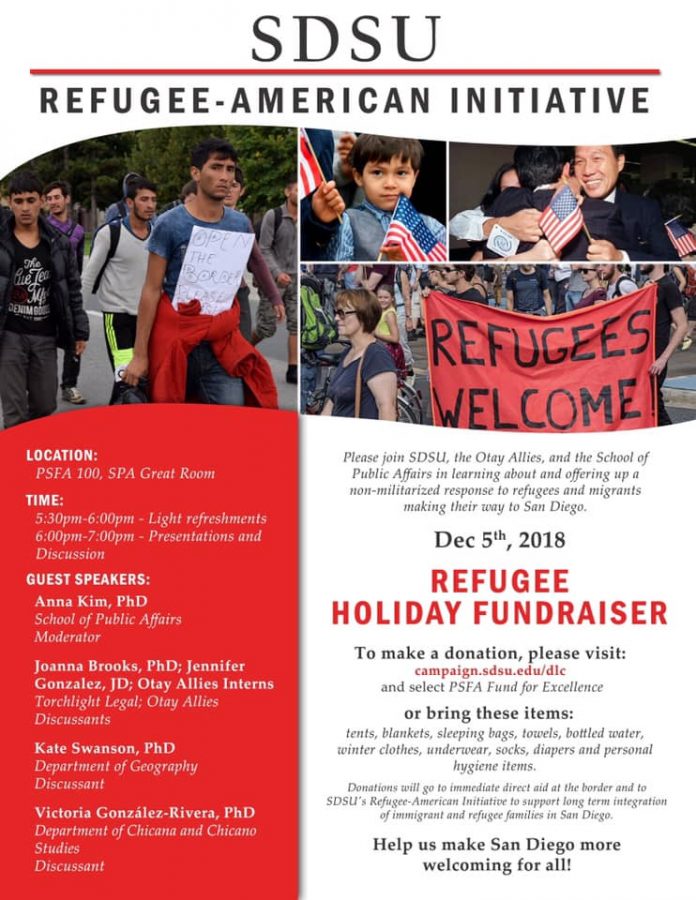 The Refugee Holiday Fundraiser will take place on Wednesday, Dec. 5 from 5 to 7:30 p.m.

In an effort to support the thousands of Central American migrants currently residing just over the Tijuana border, San Diego State’s School of Public Affairs is hosting a holiday fundraiser on Dec. 5 to collect donations and inform students on the nature of the refugee crisis.

An event announcement said organizers are looking for monetary donations or items like “tents, blankets, sleeping bags, towels, bottled water, winter clothes, underwear, socks, diapers and personal hygiene items.” Donated items and money will be dispersed to organizations that will then take them to Tijuana.

“This is a small effort to assist individuals who are basically in an emergency situation, especially with the rains and the upcoming (weather) this week,” Gonzalez-Rivera said.

Gonzalez-Rivera said there will also be an emphasis on highlighting organizations that have contributed support to Central American migrants in Tijuana, such as the Otay Allies who work with detained migrants in providing donations and legal assistance.

Gonzalez-Rivera said she hopes to answer some questions in her conversation that have been left unaddressed in some parts of the conversation surrounding the caravan’s arrival.

“What I will be mentioning is that, in response to President Trump’s question of what has Central America done for us, why should we even help these people beyond humanitarian reasons?” Gonzalez-Rivera asked.

When it comes to supporting the Central American refugees, who are located uniquely close to SDSU’s campus, Gonzalez-Rivera also said there has been a surprising lack of advocacy on campus.

“This (event) is responding precisely to that,” Gonzalez-River said. “As a campus, to my knowledge, this is (the) first effort at fundraising.”