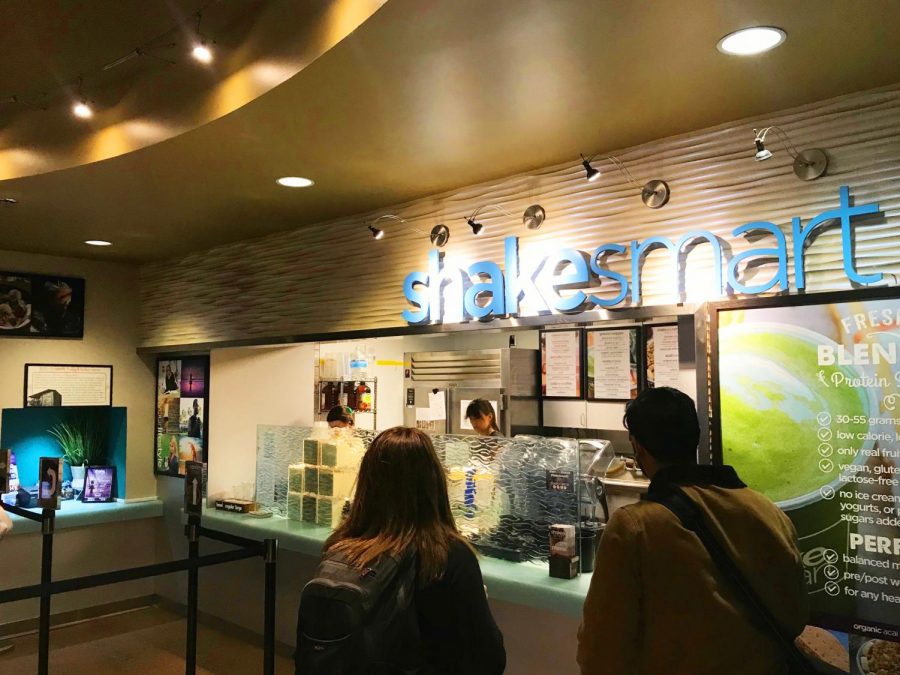 Shake Smart has two locations on campus, one in the Aztec Student Union and one outside of the Aztec Recreation Center.

What started as a desire for healthier food options on campus turned into a huge success for Shake Smart business owners and San Diego State alumni Kevin Gelfand and Martin Reiman, who were recently named in both Forbes’s and Ink Magazine’s 2019 “30 under 30” lists.

Shake Smart extends far beyond just SDSU, with 12 other locations throughout the country, 10 of which are on university campuses.

The “30 under 30” list is created by Forbes Magazine for the top entrepreneurs and young business owners under 30 years old. Reiman said the duo had submitted their information to Forbes but had not heard a follow-up.

Reiman said the moment when they found out they had made the list was surreal.

“It was crazy because we had no idea that we were being included in it,” Reiman said.

The Shake Smart team is composed of eight women who are also under thirty years old. One member of the executive board, Hilary Thielscher said she began working for Shake Smart six months after it opened in 2011 when she was a sophomore at SDSU. Now, seven years later, she is the San Diego regional manager.

“It’s cool to be able to grow with the company and see it from the beginning,” Thielscher said.

Reiman said the Shake Smart is highly customer focused, priding itself on listening and acting according to customer and employee feedback.

“We spend way more time listening to other people’s ideas then we do telling people our ideas and asking for feedback,” Reiman said.

He said it was that kind of feedback that gave birth to items like the Breakfast To Go shake, acai bowls and peanut butter sandwiches.

SDSU Shake Maker and political science senior Nate Lloyd said most of the employees know both Reiman and Gelfand personally, something that provides a unique sense of unity within the company.

“It feels like were a part of it too,” Lloyd said.

Gelfand said Shake Smart has also revolutionized the idea of using iPads in their service experience and customizing customers accounts to save their favorite orders and assist them with nutrition goals. The company first began utilizing iPads to their advantage on the employee end of their operations, then moved to having iPad stations for customers to make orders.

“It is very much like SDSU’s child,” Thielscher said.

Shake Smart originally started as a way for Gelfand and Reiman to learn how to start their own business, Gelfland said.

“Then turned into ‘Oh, this is a job we could make enough money in,’ something really special, a national business with over 200 employees,” Gelfland said.

Shake Smart has two locations on SDSU’s campus, one in front of the Aztec Recreation Center and the other in the Aztec Market located in the Conrad Prebys Aztec Student union.