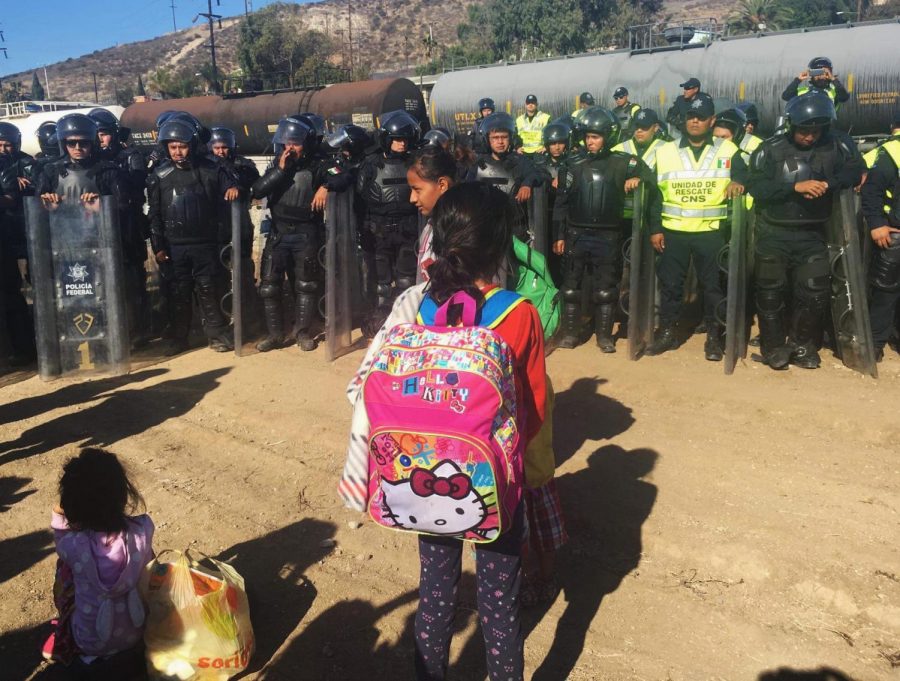 A migrant child stands in front of Mexican police in Tijuana, Mexico on Sunday, Nov. 25 during a protest at the border.

by Daniel Guerrero and David Santillan

San Diego State officials said they are preparing to offer assistance and resources to students, faculty and staff members who live or work in Tijuana following a clash between caravan migrants and U.S. Border Patrol agents that caused the abrupt and temporary closure of the San Ysidro port of entry.

An already tense situation at the border quickly turned into chaos on  Sunday, Nov. 25 as some members of the migrant caravan pushed past Mexican police officers in an attempt to cross the Tijuana-San Diego international border. U.S. Border Patrol Agents responded by temporarily closing the San Ysidro Port of Entry in both directions, leaving Tijuana and San Diego residents stranded on either side.

In response to the events, the university’s Economic Crisis Response Team is planning on providing temporary housing for transborder students and faculty who commute from Tijuana to SDSU.

“In terms of resources for students who are directly impacted, we do have mechanisms through ECRT, the Economic Crisis Response Team, and housing is (seeking) to provide short-term housing for any individual who might require or want it, given the ongoing situation with crossing the border,” Assistant Vice President of Student Affairs Andrea Dooley said at a Nov. 28 Associated Students University Council meeting.

Journalism senior Saira Araiza is one of many students who commute from Tijuana for her classes, spending four hours a day commuting to cross the border to get to campus.

For students who choose to commute across the border to SDSU, their residency status for tuition purposes can be dependent on whether they qualify for DACA. A university spokesperson said anybody who does not live in California would pay non-resident tuition, but those with DACA status and a visa that allows for border crossing would pay resident fees.

Araiza, who also works in San Diego, said the Nov. 25 border closure has been a topic of high concern in her community.

“(If more closures happen), of course it will affect me,” she said. “Half of my lifestyle is over there. For us, it’s the fear of the border being closed and not being able to live your life.”

In a Nov. 27 campus-wide email, Dean of Students Randy Timm acknowledged the possibility of potential border closures in the future and the problems it could create for students and faculty members who cross regularly.

“It is possible that there may be additional border closures in the next few weeks,” Timm said in the email. “We recognize that this may not be the only time that such a closure may occur, and we understand the stress inherent in the current activities that triggered the closure.”

Araiza said she was pleased with the statement from SDSU, especially because it was something she didn’t expect.

“To know that you are not alone like you thought you were, but the fact that you know there is some people that acknowledged it, it shows what SDSU stands for which is inclusivity and equality and offers the students to reach their goals,” Araiza said.

Associated Students issued their own statement on Dec. 4 in the form of a Facebook post, affirming their “support for the rights and dignity of all people.”

“We urge SDSU students to develop awareness of what is occurring in our region and how it is impacting lives on both sides of our border community,” the post said.

On Dec. 2, the city of Tijuana moved the roughly 6,000 migrants from a sports complex to an old concert venue, further away from the border, after unsanitary living conditions were reported. The migrants, who’ve traveled from Central American countries, such as Honduras, Guatemala and El Salvador to escape poverty and violence, are hoping to be granted asylum as political refugees in the U.S., however their future still remains uncertain.