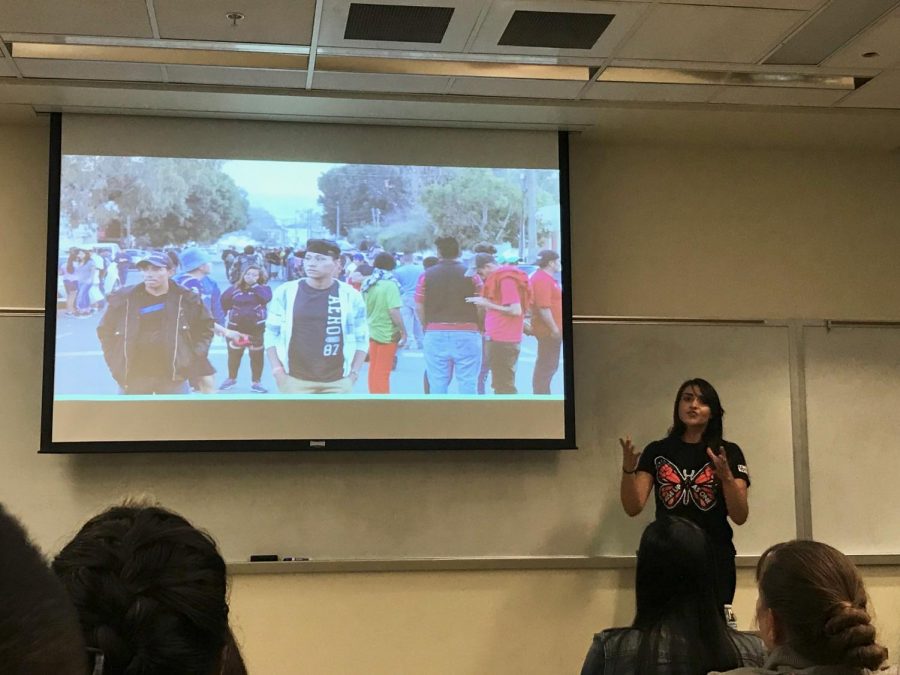 Border Angels Outreach Coordinator Leticia Guzman displays a photo of migrants in Tijuana on their first days in the city to a class at San Diego State on Dec. 10.

When walking through a migrant shelter in Tijuana, Mexico, Border Angels Outreach Coordinator Leticia Guzman said those she spoke with would often approach her with a pile of papers.

“Do you think I have a chance at getting asylum?” The migrants would ask.

Guzman, who spoke at a Dec. 10 lecture at San Diego State with the border outreach organization Border Angels, said the question cannot be answered simply, as even those with strong legal claims for asylum are bound to face a tough battle once they line up at the border.

When it comes to the situation surrounding the caravan of Central American migrants, Guzman and Border Angels Tijuana Director Hugo Castro said nothing about the reality of the situation can be understood clearly through the lens of the American media, which they claim perpetuates the image of migrants with weak claims for asylum. According to Guzman, the issue is more deeply rooted in their lack of understanding of the American immigration system.

“A lot of them don’t know the rules of the game,” Guzman said. “They could’ve been in such dangerous circumstances but they don’t fit the story, so they’ll get deported back.”

When attempting to claim asylum in the United States, those seeking refuge must prove they would be persecuted on the basis of race, religion, nationality, political opinion or membership in a particular social group. Guzman said, while many migrants fit this profile, most of them don’t know how to articulate their experiences in a manner that would be of use when speaking with Border Patrol agents.

Guzman said this is not the only area where migrants may feel they have been left in the dark. Due to a lack of access to the internet, she said many migrants were not made aware of the animosity being felt toward them until they were left to experience it in action. For some, she said this rude awakening came in the form of rocks being thrown at them while they slept. Castro said even spaces that are meant to be safe, such as shelters, have become problem areas.

“Migrants are really vulnerable because many shelters don’t accept them or they fear they will face discrimination in shelters,” Castro said.

Dr. Richard Griswold del Castillo, a retired Chicano and Chicana studies professor, said this sense of vulnerability doesn’t end at the wall. After the U.S. is able to complete an individual’s claim processing, he said migrants are thrown onto American soil with nothing to their names but a court date a few months down the line.

“That’s the crisis on this side,” Griswold del Castillo said. “We have these refugees that have been processed and now they’re on their own with no food or clothing. That’s a real tragedy.”

“Who knows? Out of this whole group, there may be five or six that maybe go, get involved and continue,” Griswold del Castillo said.

For Guzman, advocacy in Tijuana has taken the form of giving migrants a voice by allowing them to make posters, as she said the media has largely neglected to hand the microphone their way. Border Angels has also partaken in numerous efforts to provide legal consultation to those on both sides of the border and to bring donations to migrant shelters through events such as Caravan of Love.

“We need to mobilize ourselves,” Guzman said. “There have been bigger caravans of migrants in the history, but this is particular right now because our president is working (with) this and he is using these people as a political tool to (get Congress to support the wall).”