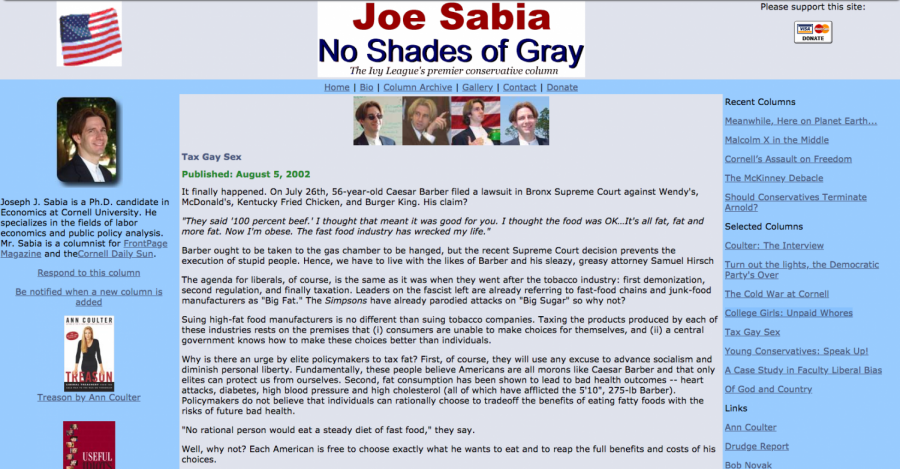 Economics professor Joseph Sabia's college blog has him in trouble, even leading the U.S. House Committee on Education and the Workforce to cancel a hearing he was set to testify at this afternoon.

The resurfacing of a number of sexist and homophobic blog posts has landed a San Diego State professor in hot water, leading the U.S. House Committee on Education and the Workforce to cancel a hearing the professor was scheduled to testify at this afternoon.

One of the blog posts, written by economics professor Joseph Sabia, attempts to strike a metaphor between gay sex and campaigns against high-fat foods.

“In gay sex, we have an activity that is clearly leading to disastrous health consequences,” Sabia wrote in the 2002 blog post. “What rational person would engage in this sort of activity? There is only one solution – let’s tax it.”

Sabia ran the blog during his college years at Cornell and dubbed it “The Ivy League’s premiere conservative column.” The website has since been deleted, but is still accessible through the internet archive the Wayback Machine.

Another blog post, published in March 2002, attacks the sexual promiscuity of girls in college.

A statement from SDSU indicates Sabia was scheduled to testify to congress on Wednesday afternoon regarding the question of raising the minimum wage to $15 per hour and that he was informed, at the last minute, that the hearing has been cancelled as a direct result of his college blog posts.

In response to the decision, Sabia said the notion of him being considered homophobic has deeply troubled him.

“I regret the hurtful and disrespectful language I used as a satirical college opinion writer 20 years ago,” Sabia in a university statement. “I am a gay man in a long-term, committed relationship and these charges of homophobia deeply hurt both me and my family.”

The university said it condemns any sort of language that would “undermine or devalue” anybody on the basis of their differences. The statement then went on to describe the importance of an individual’s right to freedom of speech.

“Freedom of speech is the right of every individual, and that right affords the responsibility to challenge and to oppose the spread of fear and intolerance,” the university statement said. “This responsibility extends to challenging and reflecting on our own former statements and beliefs. We believe that diversity and inclusion is a journey, not a destination and that many individuals will change their perspectives over time.”

University President Adela de la Torre also addressed the situation in a personal statement on her Twitter on Wednesday evening.

“I am personally appalled by the statements that were published two decades ago and are now at the forefront of the conversation,” de la Torre tweeted, “The sentiments expressed in those articles are contrary to the values of diversity, respect and inclusion that I, students, faculty, staff and alumni hold dear. Freedom of speech is a two-way street, and we have the responsibility to challenge the spread of fear and intolerance, even if that means confronting the beliefs one has held in the past.”