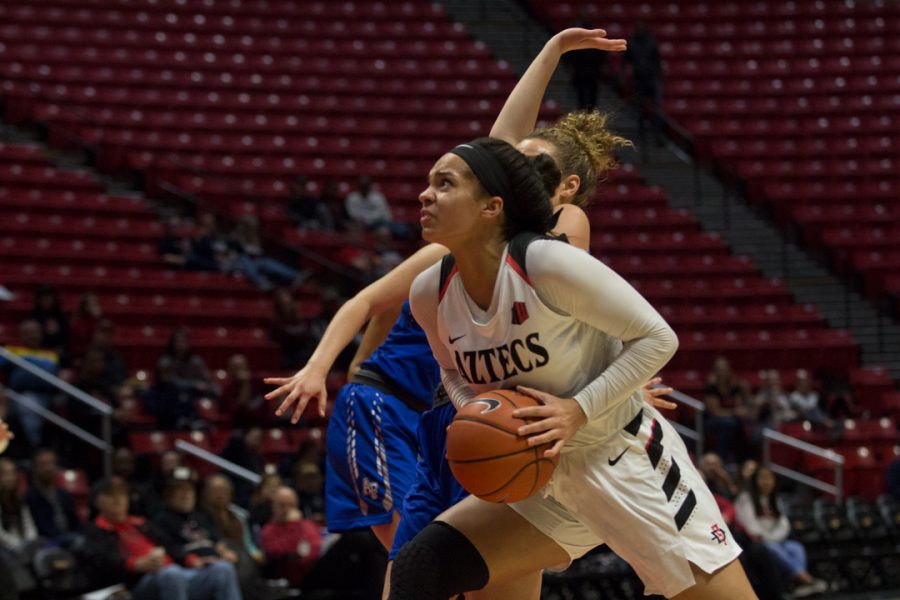 Sophomore guard Tea Adams drives around an Air Force defender during the Aztecs 70-61 victory on Jan. 12 at Viejas Arena.

San Diego State women’s basketball stopped a four-game losing streak and got a win on its conference record after defeating Air Force, 70-61, on Saturday afternoon at Viejas Arena.

The Aztecs had lost seven of their last eight games coming into the matchup.

Sophomore guard Tea Adams said it was nice to see the team’s hard work pay off.

“I think it’s really rewarding,” she said. “I know we work really hard in practice, I see all the extra work that we put in. We finally had it our way today and I think if we keep working hard, it’s going to be like that for a lot of the other games.”

Air Force was up by eight in the first quarter but the Aztecs continued to battle. After an 8-0 run, the Aztecs took their first lead early in the second quarter.

SDSU trailed by one at halftime.

The Aztecs shot for 70.3 percent from the free-throw line overall and made a season-high 26 free-throws.

Head coach Stacie Terry said she was proud of the way the team handled the pressure.

“Air Force is a very good defensive basketball team,” she said. “They have forced us to lose our composure in the past. I was proud of our girls with such a physical game, for us to keep our composure and knock down free throws when we needed to.”

The Aztecs turned up the intensity on the defensive end in the fourth quarter as they reduced Air Force’s field goal percentage by half and limited them to only 11 fourth-quarter points.

The Aztecs shot for 40.4 percent from the field. After going 0-6 from the three-point line in the first three quarters, Murray got in touch with her shot and drained two three’s in the fourth.

The rest of Murray’s points came from under the basket and the free-throw line.

Adams is tightening the screws with her ankle injury as she added 12 points.

Both players, known for their jump shot, were more well-known in the paint today.

Adams said it was a team goal to attack the basket.

“We actually have been focusing on how (Air Force) is defensively,” she said. “They’re known for reaching in and being a little more aggressive on the defensive end. So that just means we have to get into them, get more fouls, and get to the freethrow line — that was one of our goals.”

Terry said Murray’s been working on her game under the rim.

“Najé’s been working really hard on that,” she said. “She’s trying to let everybody in the country know that she’s more than just a shooter. So she’s been working hard on finishing at the rim and getting to her mid-range.”

The way the Aztecs have started previous games has haunted them and is something they have been focusing on improving.

Adams said the team is adjusting the way they start games.

“We’re actually trying to emphasize starting fast,” she said. “We want to start fast so we don’t have to keep digging ourselves out of the hole. It was a little better today so that’s a positive. If we play hard in the first half — even the first quarter — then we don’t have to pick up our slack in the second half.”

Terry said the win will help the team down the road.

“I’m just happy we were able to come away with a win,” she said. “We’ve had some tough games to open up conference. We played the top of the conference early so for us to be able to protect our home court and get a really hard-fought win today is only going to help us down the stretch.”

Murray said the momentum will be applied to the rest of the season.

“It’s been slow,” she said. “But one is all you need to take off. We’re going to use this momentum on the road and getting ready for conference.”

The Aztecs head to New Mexico to play the University of New Mexico on Jan. 16.