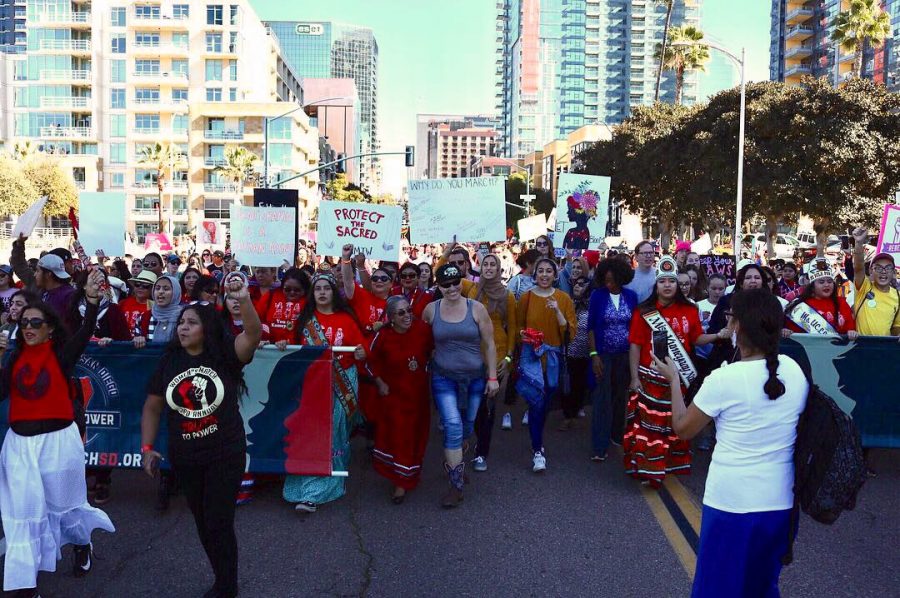 Thousands met up in downtown San Diego on Jan. 19 to participate in the third annual Women's March.

Despite recent accusations of anti-Semitism, thousands of activists gathered in downtown San Diego for a third consecutive year to participate in the Women’s March, advocating for various causes including gender equality and LGBTQ rights, while also protesting the president.

Two years ago, the Women’s March became the largest protest in U.S. history following the election of President Trump. Now, in the midst of the nation’s longest government shutdown, the platform of the march has widened to include issues such as immigration reform and gun control.

“I’m marching today to support all of my women, I was raised by women, ” UC San Diego graduate student Antoinette Ronquillo said. “For change to happen you need to be there an participate.”

Monica Boyle, an executive board member of Women’s March San Diego, said this year’s march sought to celebrate the newly elected women in office following the 2018 midterms, which led congress to host a record-high number of 102 female congresswomen.

“There’s been an incredible number of women that have stepped up into positions of leadership,” Boyle said. “We’re here to celebrate (them); we’re also here to put a spotlight on many of the challenges that we still face.”

Across the nation, activists supported the Women’s March despite controversy surrounding one of its co-chairs, Tamika Mallory, after she publicly supported Nation of Islam leader Louis Farrakhan who is known for having made anti-Semitic comments in the past.

According to a report by the National Review, this caused the Women’s March to lose the sponsorship of the Democratic National Committee and a number of other significant donors.

While this controversy might have pushed some to stay home form this year’s march, many others still turned out, with an estimated 20,000 attendees having filled the streets of downtown San Diego on Jan. 19. By contrast, USA Today reported roughly 60,000 attendees at the Washington march, compared to the estimated 500,000 two years ago.

San Diego State public relations senior Angelena Lufrano attended the march and said she hoped the event sent a message to the administration about the people they’re representing.

“I think they need to see all the people that are out here and all the different types of people that they’re meant to represent, and really get people (that look) like us into power and get our voices heard,” Lufrano said.

Locally, Assemblyman Todd Gloria (D-San Diego) said San Diego elected officials are looking to tackle some of the issues that were being highlighted at the march, such as family separations at the border, immigration reform, equal pay and women’s reproductive rights.

“I think, first and foremost, we have to listen,” Gloria said. “Listen to these voices that have historically been marginalized in the public debate and then take action upon what we hear.”

In regards to statewide issues, Gloria attributed the root of many problems to economic injustice, citing the current affordable housing crisis as an issue he  thinks should be considered a top priority.

“I think, if we prioritize (the housing crisis), we can work on other issues like health care, education and criminal justice reform, the other issues that are very important,” Gloria said.