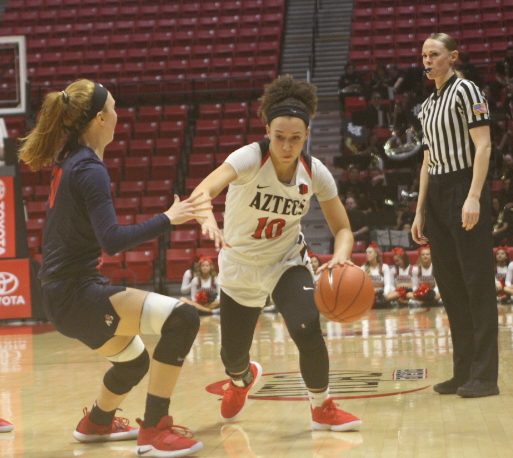 Sophomore guard Najé Murray drives to the left during the Aztecs' 87-81 loss against Fresno State on Jan. 23 at Viejas Arena.

“Anytime you give them – I consider that giving them – 55 points by fouling and turning the ball over, it’s going to be a long night,” Terry said.

SDSU was in foul trouble for most of the game and Fresno State (12-5, 5-1) managed to take advantage by going 22 of 24 from the free-throw line.

“We got in foul trouble early,” she said. “They’re an 85 percent free-throw shooting team and they were 22 of 24 from the line. If we cut (their free throws) in half, we win.”

SDSU sophomore guard Téa Adams got subbed out due to three quick fouls five minutes into the game.

Terry said Adams’ absence was crucial to the game result.

“It was huge for us because it limits us as far as having another ball handler out there, so we have to play some of our reserves who don’t necessarily have the experience,” Terry said. (Adams) helps with ball security, and that’s been a big problem for us.”

Despite Murray’s 22-point outing, she said she was frustrated with the outcome.

“I always say I can score 50 or zero, it doesn’t matter to me,” Murray said. “I am frustrated tonight, I’m just sick of losing. For me, it’s a loss, and that’s all I’m really thinking about right now.”

The Aztecs were going against a tough Bulldog zone defense, but they were able to distribute the ball in a way that worked for them offensively.

“When we share the ball, our offense just runs more smoothly,” she said. “It’s kind of a personnel thing too, knowing who our main attackers and shooters are and adjusting to that. For the most part, they were zoning us, so we were swinging the ball and looking for shots.”

Dornstauder scored 10 points on five of six shooting from the field.

Terry added that she wants to see more from Dornstauder defensively.

The Aztecs will take a road trip first to UNLV on Jan. 26 then travel to Air Force four days later.

Terry said the team will be focusing on what it was lacking tonight – taking care of the ball.