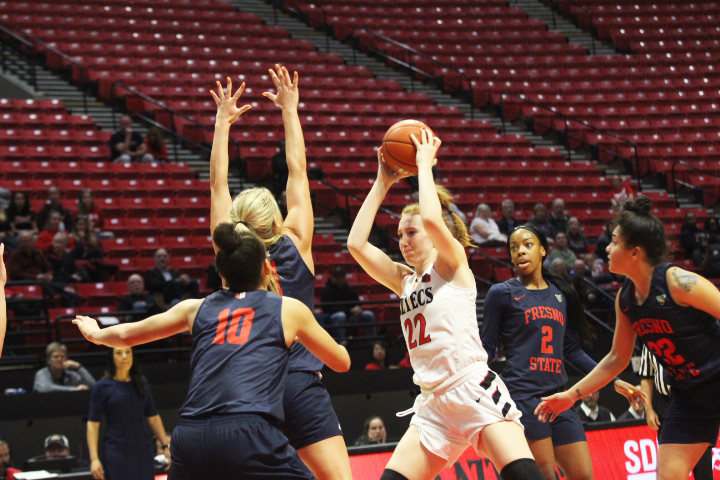 Redshirt junior center Zayn Dornstauder looks to pass the ball during the Aztecs 87-81 loss to Fresno State on Jan. 23 at Viejas Arena.

The Aztecs desperately need an inside scorer. Only five out of the team’s 26 first half shots came in the painted area. Too many times throughout the night Aztecs were seen standing around the three point line.

In the Aztecs’ defense, the Bulldogs played a condense zone. Regardless, the Aztecs need to get the ball inside more frequently.

“We do have to find someone that we can go to down the stretch when we need a bucket,” Terry said. “The five is where we need some scoring help, and (Dornstauder) is stepping up in that role.”

The Aztecs can still score the ball. In fact, they shot 50 percent in the first half, despite not having an effective inside scorer.

SDSU needs to give their Canadian center the ball. Dornstauder needs more touches.

“I think touches are good in the paint, especially because I’m 6’4” so I can shoot over most people,” Dornstauder said. “Touches in the paint creates for other people if it doesn’t create for myself.”

I believe, like many college basketball teams, the Aztecs are using the NBA small ball approach. This means the team is hoisting up threes and avoiding the center.

But, in a competition you must take advantage of whatever you can. The Aztecs have a player in Dornstauder who they need to feed the paint.

It is true that sophomore guard Name Murray is arguably the team’s best player and her game is shooting. So it makes sense to make an offense based off of her skill set, but having an inside presence will help her get open looks from deep.

“There is things the bigs do for us that isn’t scoring. I know I can credit them for a lot of my threes, a lot of my layups, their setting screens, their presence is a worry for the defense which means someone else will be open,” Murray said. “It’s almost like a quarterback, no one gives credit to the o-line, it’s the same idea.”

Getting inside results in easy layups and fouls on the opposition. In the third quarter, Dornstauder attempted five more shots than she did in the entire first half. She finished the third shooting five for six. All her looks came from inside.

The whole Aztecs team had six attempts in the paint, more in one quarter than the entire first half.

“I do think touches are a good thing for me. The more I get on the block the more comfortable I am,” Dornstauder said. “I need to be more aggressive. I think it would be beneficial for the team if I looked to go up more.”

In the fourth quarter, the Aztecs did not play their 6’3” center enough. Actually, she had zero shot attempts in the fourth. But, the team as a whole did attempt nine layups in the quarter. If the Aztecs got in the paint earlier, they would’ve likely beaten Fresno State.

“(Dornstauder’s) a great offensive weapon for us so we need to look to get the ball there,” Terry said. “I need her to improve on the defensive side and rebounding. I need to command the defensive glass like she goes after offensive boards.”