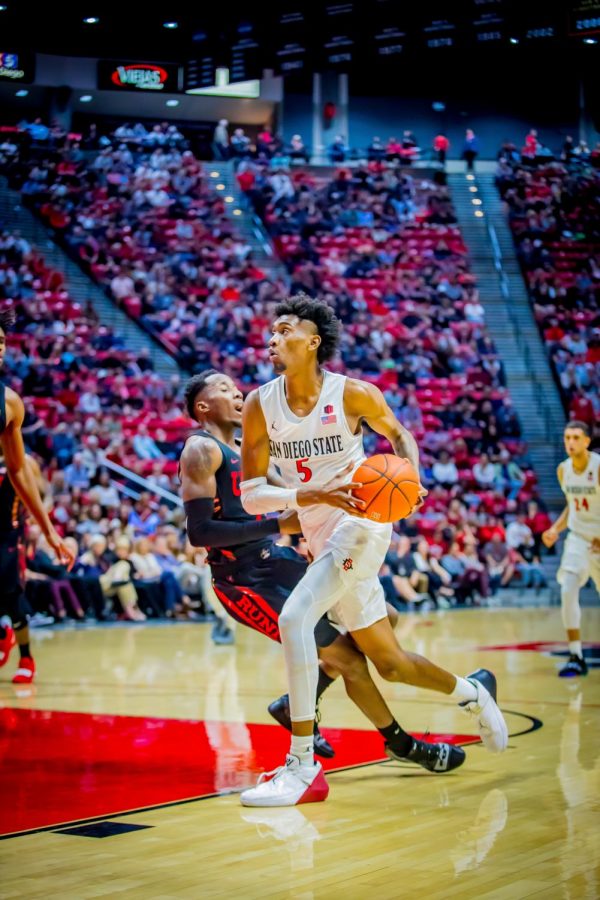 Sophomore forward Jalen McDaniels drives to the hoop during the Aztecs 94-77 victory over UNLV on Jan. 26 at Viejas Arena.

San Diego State men’s basketball has benefited from playing at the friendly confines of Viejas Arena this season, winning eight of 10 coming into a matchup with UNLV.

The trend continued on Saturday evening, as the Aztecs secured their ninth win in 11 chances with a 94-77 triumph over the Runnin’ Rebels.

“Jalen was rolling today,” head coach Brian Dutcher said. “We ran everything through Jalen, put the ball in his hands and he produced.”

McDaniels also finished with 13 rebounds to secure his fifth straight double-double, and took advantage of his time at the free throw line with 10 made on 12 attempts.

“I mean shoot, you don’t expect anything less from Jalen,” he said. “He has a nose for the ball. He plays with a lot of energy and it shows.”

As a team, SDSU appeared to live at the charity stripe, converting 24 of 30 attempts, while the Runnin’ Rebels finished with only six made free throws on 14 attempts after opting to settle for 30 shots from behind the arc.

“I think the difference in the game was from the foul line,” Dutcher said. “We took the ball to the basket and we got to the foul line and whatever we didn’t get from 3-point range we made up for on the free-throw line.”

Mitchell, who failed to make a three on only two attempts after coming in shooting 33 percent from deep, said he was indifferent to UNLV’s style of defense, which held SDSU to only 11 3-point attempts (making six).

“I just like to play the game of basketball,” he said. “It’s always fun to see different game plans and how they play out against us, and we can pretty much adapt to any game plan with the diversity of our team.”

The Aztecs scored first to open the game and never relinquished the lead, growing their advantage to over 20 points for the first time after a 12-2 run put them up 63-42 with just under 15 minutes to play in the game.

Senior guard Kris Clyburn hit a 3-pointer to get the Runnin’ Rebels to within 67-54 with just over 12 minutes left, but the visitors would not get any closer.

Clyburn finished with seven points for a UNLV side which was led on offense by 19 points from freshman forward Joel Ntambwe and 18 points from sophomore guard Amauri Hardy.

McDaniels scored 17 points in the first half to pace the Aztecs to a 46-35 halftime lead, overcoming nine 3-pointers made by UNLV.

SDSU made only two more shots than the Runnin’ Rebels in the opening frame, but benefited from 13 points from the free throw line on 17 attempts.

The Runnin’ Rebels, conversely, attempted only two free throws in the opening period, missing both, but were able to stay in the game thanks to their effectiveness from behind the arc.

SDSU will look to continue its strong play at home in its upcoming game against Air Force on Jan. 30.