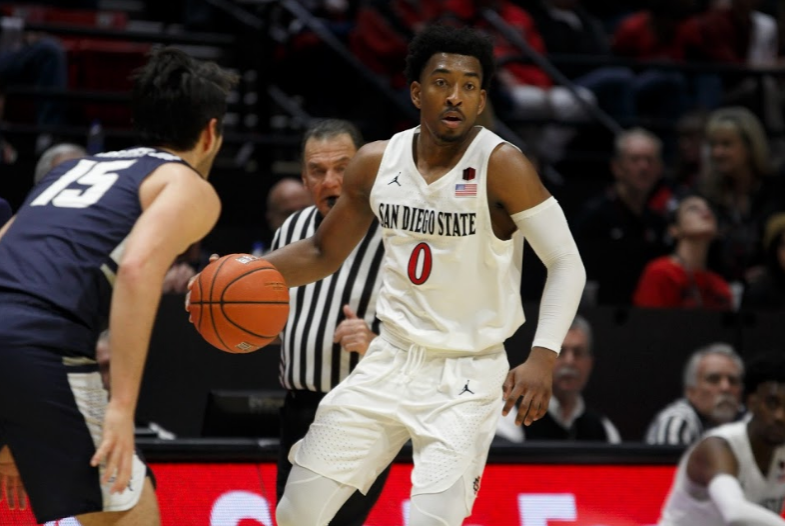 Senior guard Devin Watson carries the ball during the Aztecs 68-63 victory over Utah State on Feb. 9 at Viejas Arena. Watson finished with a team-high 23 points for SDSU.

The win improved SDSU’s home record to 11-2, was the Aztecs’ 11th straight victory over the Aggies and snapped a seven-game winning streak for Utah State (18-6, 8-3 MW).

“Just a really satisfying team victory tonight,” he said. “We set a game plan, switched up what we were doing two days ago and got it done on the floor.”

SDSU (14-9, 6-4 MW) led for most of the second half and withstood a late charge from the Aggies and senior guard Sam Merrill, who poured in 35 points.

“Merrill was fantastic, he just gets his whenever he wants,” Dutcher said.

Merrill had 20 points by halftime, but his night came to an early end after he fouled out on a charging violation with 49 seconds left and SDSU leading 63-58.

The Aggies pulled within 66-63 after a layup from freshman guard Tauriawn Knight with 5 seconds left, but the visitors would not get any closer.

Utah State shot 39 percent from the field, compared to 37 percent for the Aztecs, which Dutcher said was a testament to his team’s defense.

On the offensive end, the Aztecs finished with four players in double figures and were paced by 23 points from senior guard Devin Watson.

Watson said it felt good to get a win over the Aggies.

The double-double was the first of Mensah’s career, and he credited his teammates for putting him in position to succeed.

“It feels great, my teammates put me in a good spot to play,” he said. “They look at me as more than a freshman, they expect good things of me so I think they are part of my first double double in history.”

The Aztecs went into halftime with a 33-29 lead, after a back-and-forth first period saw both teams go on big runs.

Watson said the team was determined not to let the halftime lead slip away.

“We wanted that win bad,” he said. “Especially being up by three at halftime, we’ve been in that situation too many times. So we were just telling ourselves we can’t let this one go.”

SDSU got off to a slow start, making only two of their first ten shots, but surged ahead with a 23-0 run midway through the first to go up 31-18 with less than six minutes to play before the break.

Watson said the team was not aware of how many consecutive points they had scored during the half-changing spurt.

The Aztecs were trailing 18-8 before the run, which included five straight points from Mensah and was capped off with consecutive 3-pointers from Watson and McDaniels.

SDSU went cold from the field, however, and failed to make another field goal, while Utah State responded with an 11-2 run to end the half, with every point coming from Merrill.

Merrill had a chance to pull the Aggies within one point on the final possession, but his corner three-point attempt was off the mark, and senior forward Quinn Taylor’s putback attempt went in and out as the buzzer sounded.

The Aztecs will hit the road for their next game against Colorado State on Feb. 12.