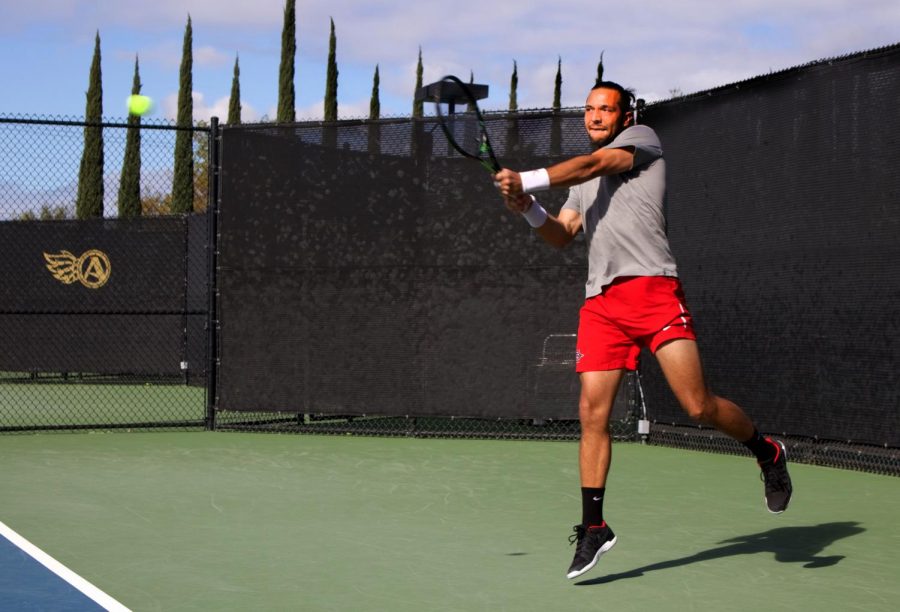 Junior Fabian Roensdorf competes during the Aztecs 4-3 loss to Northern Arizona on Feb. 10 at the Aztec Tennis Center.

Junior men’s tennis player Fabian Roensdorf threw his racket to the adjacent court after he dropped the third set of his match on Sunday morning against Northern Arizona University.

Roensdorf’s 5-7, 7-6, 0-6 defeat ended up being the deciding match point, and sent SDSU to a 4-3 loss against NAU on a chilly morning at the Aztec Tennis Center.

The Aztecs were down early after dropping the doubles point, as the pair of Gjoels-Andersen and junior Rafael Gonzalez Almazan were the only winners in doubles play.

The doubles point has been an area of struggle for SDSU this season, and Gjoels-Andersen said the team knows they have to work on it.

“We’ve been struggling a little bit in the second and third spot so we’ve got to practice that this week,” he said.

Head coach Gene Carswell said the Aztecs did not give up despite losing the doubles point.

“There was definitely a lot of fight within the group to try to right the match after dropping the  doubles point,” Carswell said. “We’re going to have to continue to work to improve the doubles side of things.”

The singles matches started with a loss, with Almazan falling in two sets on court five (2-6, 3-6).

Then, with the Aztecs down 2-0, sophomore Ignacio Martinez picked up the first point of the day with a two set victory on court three (7-6, 6-2).

It was up to the Aztecs’ stars to finish off the match.

On court two, Gjoels-Andersen appeared to be in an intense match, as he and his opponent were arguing calls and screaming for points.

“I got things moving and I’m really happy I won,” Gjoels-Andersen said. “I think I’m playing well at the moment, really excited for the rest of the season.”

The fate of the match laid on Roensdorf, and all eyes were on court one, but Roensdorf couldn’t find his magic in the third set as NAU came away with the victory.

The loss puts SDSU’s season record at 2-3, and was the second loss in three days for the team after they lost to No. 23 Alabama on Friday.

“Obviously we got things we need to work on,” Carswell said. “We’ve got work ahead of us, these guys all know it and I think the good thing about this group is they see it for what it is as well. They need to get better, they’ve got to improve.”

The Aztecs next match is on Feb. 17 at home against University of San Francisco.