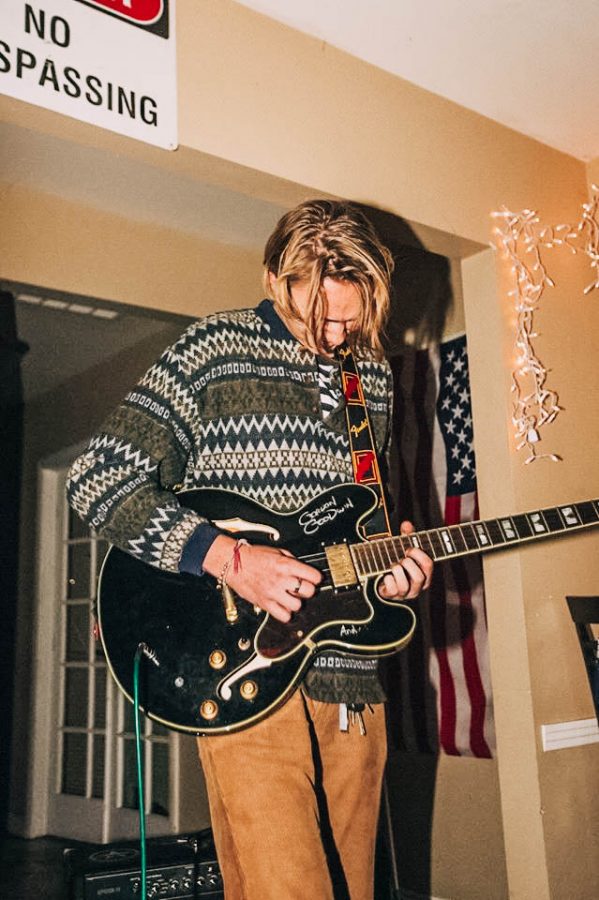 At the moment, the musician is currently working on several projects, including a soon-to-be released extended play and a currently untitled LP. Available now, however, is an earlier project uploaded to SoundCloud under the name Dome the Device. Plus, he has been known to make appearances alongside his bandmates, together known as The Arnolds, at various house parties and events throughout San Diego.

Despite the many projects he’s now involved in, Guadagno entered SDSU unsure of what to pursue.

“I thought it was time to do something that can make me money in the future,” he said of deciding what to study. “I (chose) econ (as my major) because I like how versatile it is, but I didn’t really know what I wanted to do with that.”

Throughout his freshman year, Guadagno did not work on music often. However, he learned about the production software Ableton through a friend and a class offered at SDSU, and he said this is what sparked his decision to focus on music.

His solo music contains elements of R&B, psychedelic rock and jazz, but he continued to explore further for an outlet to experiment with different sounds.

“I’d say, we are quite literally a garage rock band just because we play a lot of harder rock music in a garage,” environmental engineering sophomore and guitarist/vocalist of The Arnolds Jeffrey Wright said. “But we have a lot of more thought out, intricate, slow, indie and alternative stuff too.”

The three members all share the spotlight when it comes to vocals. The trio has been covering music and putting together some original work as well.

The Arnolds has been able to work on its stage presence and chemistry by consistently performing at local events held by acquaintances.

Guadagno, Wallach and Wright said they enjoy the laid-back atmosphere this type of setting provides.

“It’s a good way to test if your stuff is working in a non-stressful scene,” Guadagno said. “You just learn by performing and seeing how the audience responds.”

The band members agreed that this type of performance testing has allowed The Arnolds to understand its own niche.

“This is something that gives us a chance for us to experiment and see if we can make it something bigger.” Wallach said. “It’s all on us and that a pretty good place to be.”

Guadagno, who admittedly is still searching for the best way to market and label his sound, is hoping his learning discipline will create a unique space for him to prosper and create. He said he wants his music to project the welcoming atmosphere the band has received from its growing fan base.

“The ideal crowds that I want to be around are all about inclusivity, just like the people that I want to work with,” Guadagno said. “We’ve been surrounded by just super positive people and folks that are always down to support us.”

Guadagno plans to have his EP ready for the masses by early March and will continue to jam with The Arnolds in the meantime.