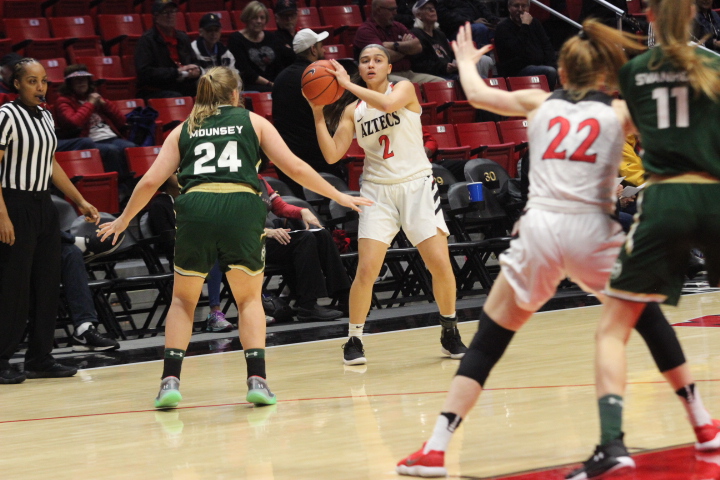 Freshman guard Sophia Ramos looks to pass the ball into the post during the Aztecs' 54-45 victory over Colorado State on Feb. 13 at Viejas Arena.

“When you hold somebody to 45 points you give yourself a really good chance to win,” she said. “Our defense over this four-game winning streak is what’s holding us down.”

SDSU got off to a bad start, specifically in the second quarter, when the Aztecs turned the ball over six times and were outscored 17-9.

“I’m not sure if it was complacency or exactly what it was,” she said. “But we ended up winning so we figured out how to get that transition.”

Freshman guard Mallory Adams, who collected her eighth double-double with 17 points and 13 rebounds, said things weren’t falling for the Aztecs early on.

“Things just weren’t going our way in the second quarter,” she said. “But we made sure to make the adjustment and come out strong in the second half.”

Though they shot for just 25 percent from the field, the Aztecs stepped it up on defense while forcing the Rams to shoot 2-17 from the field in the third quarter.

Colorado junior guard Mollie Mounsey, who is second in the conference for three-pointers made, shot 3-14 from the field and 3-13 from the three-point line.

Gomez said the emphasis on defense has contributed to the team’s success.

“The last two and a half weeks we’ve been focusing a lot on our defensive principles,” she said. “And making sure that we’re shutting down they’re key players.”

Terry said she was pleased with Adams’ performance, after she collected more than 10 rebounds for the 12th time this season.

“I’m really proud of Mallory tonight,” she said. “I thought she got offensive boards and made big baskets when she needed to.”

The victory was the Aztecs’ first win that exceeded two points.

Adams said it was nice to relieve some stress towards the end.

“It’s really stressful when it’s those one-point, two-point games,” she said. “We’ve been doing well with last-second shots and getting defensive stops at the end. But it is nice to get to take a deep breath.”

The victory was SDSUs first over Colorado in its past 12 meetings with the Rams.

Terry said the Aztecs responded well to the Rams’ zone-defense.

“They play in that zone which makes it so hard to score,” she said. “We were able to just get inside the high posts, make some high-post passes and knock down some shots.”

SDSU will now take a roadtrip to Boise State University to play the conference leaders on Feb. 16.