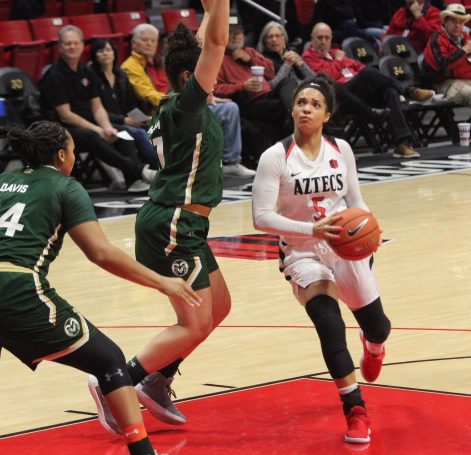 Then-sophomore Téa Adams attacks the post during the Aztecs' 54-45 victory over Colorado State last season on Feb. 13 at Viejas Arena.

Head coach Stacie Terry told GoAztecs.com the winning streak can be traced back to the team’s intensity and focus on defense.

“When you hold somebody to 45 points, you give yourself a really good chance to win,” Terry said. “Our defense over this four game winning streak is what’s holding us down.”

The Aztecs held Colorado State to only seven first quarter points on 3-of-11 shooting, and forced six first half turnovers while holding the Rams to 21 percent shooting from 3-point range going into the break.

SDSU’s defense appeared to make up for an offensive effort which saw the team shoot only 38 percent from the field.

“I’m not sure if it was complacency or exactly what it was,” she said.

The Aztecs held the Rams to 30 points through three quarters and just six points in the entire third frame.

Freshman Mallory Adams, who had her eighth career double-double, said the team’s defense has benefited from its versatility.

“We recently changed the switching one through four and I think that’s really been helping us,” Adams said. “Mostly, all of us can guard off the bounce and put a hand up on shooters.”

Their last four wins have come by one point, two points, two points and nine points. The Aztecs held the Rams to 28 percent shooting tonight and 7-of-29 from 3-point territory, while also forcing 10 Ram turnovers.

“The last two and half weeks we have been focusing a lot on our defensive principles, making sure that were shutting down their key players, Adams said. “It’s help defense. If one person is fronting in the post then whoever’s beside that person fronting we need to lend support and dig in and know that the backside is there to help as well.”