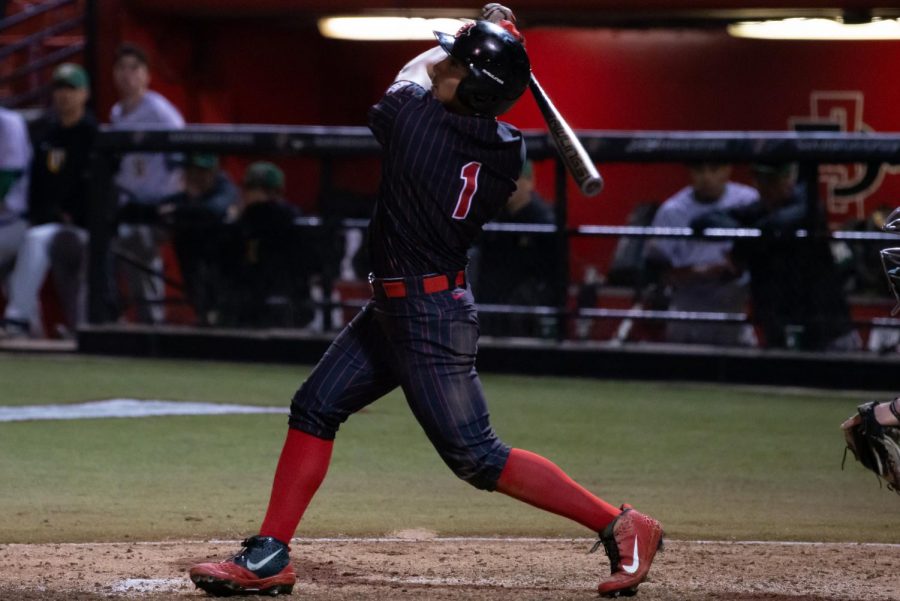 Junior outfielder Julian Escobedo follows through on a swing during the Aztecs 8-4 victory over USF on Feb. 15 at Tony Gwynn Stadium.

Escobedo had a career high five RBI’s and hit his third home run as an Aztec while falling a triple shy of the cycle. On the mound, Boyer set a career high five innings pitched and finished with a career-high 10 strikeouts en route to his first win on the season.

Head coach Mark Martinez said the team’s opening day win was important for the start of the season.

“Winning is contagious, so it’s important to kind of get off to a good start,” Martinez said.

Escobedo opened up the scoring in his second at bat in the third inning. With two outs and the bases loaded, Escobedo singled to the right side of the field to bring in two runs and give SDSU its first lead of night and first runs of the season.

The two out scoring wouldn’t stop there. Sophomore catcher Joe Fitzhugh brought in the the remaining two runners off of a line drive single to left field that capped off a four run inning for the Aztecs.

Martinez said the situational hitting is something they practice and that helped them tonight.

“We practice that,” Martinez said. “Those are some big at bats for us. We had some really key base hits.”

With a four run lead, Boyer was able to silence the USF bats, and he held the Dons to no runs on just one hit through his first four innings of work while earning eight of his 10 strikeouts.

Boyer’s 10 strikeouts set the tone for the SDSU pitching staff, which collected a combined 17 strikeouts on the night. The most for an Aztecs squad in a nine inning game since 2009.

Boyer said his mentality on the mound  was to give it his all for his team in the season opener.

Martinez said, it hindsight, Boyer should have been out of the game by this point.

Escobedo got the Aztecs one of the two home runs back when he launched a solo home run into right field in the bottom half of the inning.

The Aztecs will play a doubleheader on Feb. 16 against the Dons.

Martinez said the team’s biggest needs to be mentally prepared for the doubleheader.

“We’ve got to be able to flush and get after it tomorrow because 18 innings in one day is a lot and we haven’t experienced that all spring or all fall,” he said. “It’s going to be a long day and we’ve got to manage it mentally.”