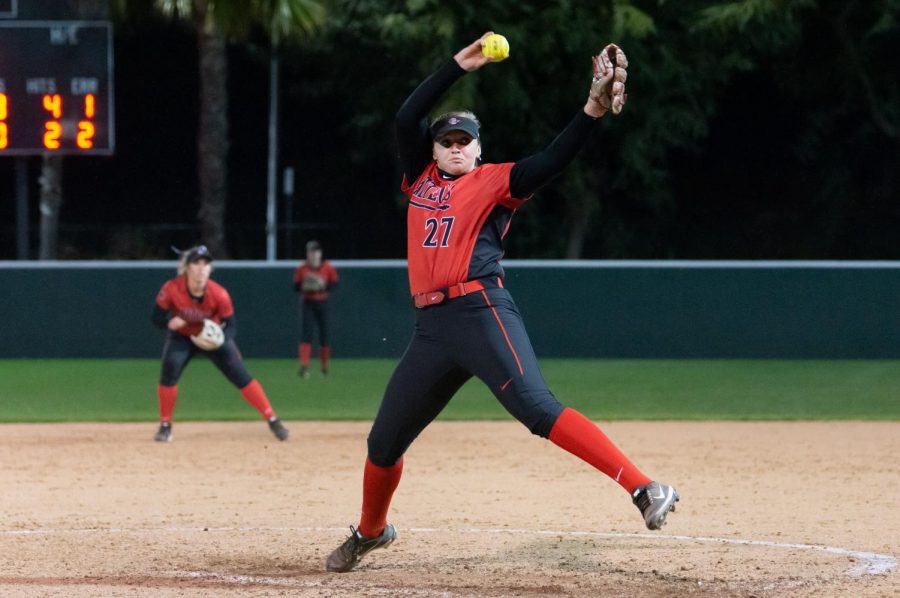 San Diego State softball wrapped up the Campbell/Cartier Classic with an 8-0 loss against Grand Canyon 8-0 in the back end of a doubleheader on Saturday at the SDSU Softball Field.

The loss, which dropped SDSU’s record to 6-3 on the year, came after the Aztecs defeated UC Santa Barbara 1-0 earlier in the day behind a shutout from junior pitcher Marissa Moreno.

Grand Canyon struck early in the nightcap, scoring two quick runs in the top of the second inning. The Antelopes were hot offensively, producing solid hits, finding holes on the field and scoring when runners were on base.

SDSU head coach Kathy Van Wyk said she was hoping the weekend was going to end on a better note after having a successful three wins going into Saturday night’s game.

“It was unfortunate that we had to end our weekend this way, because we had done so well prior to tonight’s game,” Van Wyk said.  “But, we talked about a lot of things that we need to continue to work on as a team.”

James said she walked out onto the mound in the third inning looking to turn the game around for the Aztecs.

“I came into the game and just wanted to shut the other team down because of the amount of momentum they had on us,” she said. “We were doubting ourselves as a team and our confidence was not there tonight.”

“I can’t even begin to tell you the improvement MJ has made since the fall to now, and she is only going to get better and better,” Van Wyk said. “Other than missing a few targets tonight, she did a really great job.”

The Aztecs struggled to take advantage of opportunities when runners were on base, not being able to produce hits in crucial moments.

Junior outfielder Kristen Parker felt the Aztecs could have done more on offense to help out their pitchers.

“We were lacking those big hits in those big moments, but we try not to focus on the negatives and just focus on the positives,” Parker said. “(It) was hard ending the weekend on a rough note but we definitely know what we need to work on and just learn from tonight.”

Van Wyk said she is proud of her team going 3-1 in this tournament and looks forward to the rest of the season.

“We are not even close to being as good as we can be and once we start putting everything together I am excited to see what is going to happen with this team,” Van Wyk said.

The Aztecs have their next game against Cal State Fullerton at Anderson Family Field on Feb. 20.