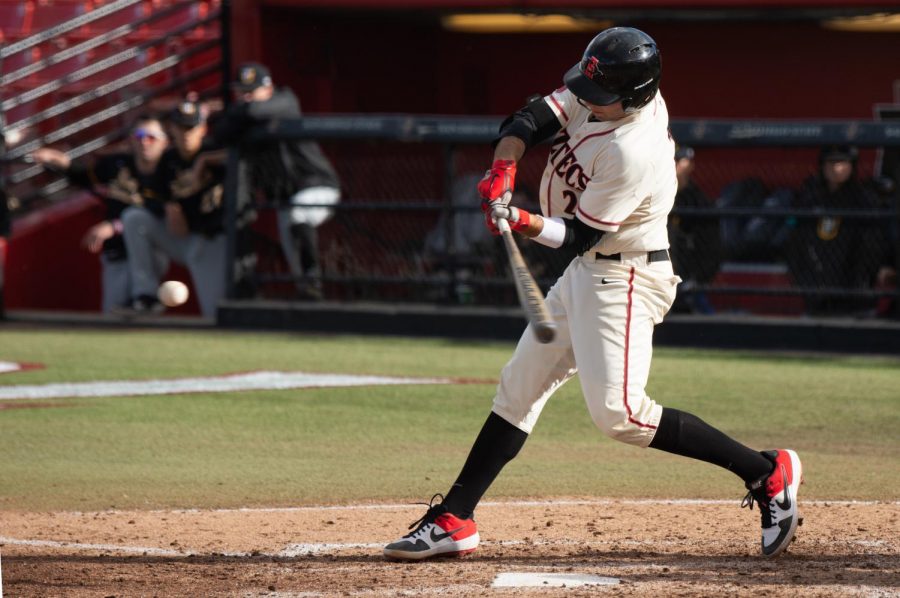 Freshman infielder Brian Leonhardt hits the ball during the Aztecs' 9-8 loss against USF on Feb. 16 at Tony Gwynn Stadium.

San Diego State baseball split a doubleheader against San Francisco on Feb. 16 to finish the opening weekend with its first series victory of the year.

The Aztecs followed up a win in Friday’s season opener with a 9-8 loss on Saturday afternoon, and concluded the series with a 6-3 victory in the nightcap against the Dons at Tony Gwynn Stadium.

“It was great to win two out of three,” head coach Mark Martinez said. “Opening weekend (has) a lot of anxiety and adrenaline… guys are excited.”

Martinez said he was happy the team was able to rebound from the loss in the first game of the doubleheader.

“What I’m mostly proud of was the way we lost the first game, and the way we came back and won,” Martinez said. “(It) shows a little bit of character for us.”

Heading into the ninth inning of the first game, the Aztecs were winning 8-5, but a four-run ninth inning pushed the Dons ahead.

Junior outfield Julian Escobedo went 6-for-12 over the three-game series and hit a home run Friday night in addition to finishing off the weekend with eight RBIs.

“Escobedo had a phenomenal weekend,” Martinez said. “I’m sure that will gets votes for Mountain West Player of the Week.”

Escobedo, a local product from Chula Vista, hit the go-ahead two-RBI single in the seventh inning of SDSU’s final victory and said he continues to have the same approach at the plate.

Playing a doubleheader can be challenging, but Escobedo said it will help the team out in the long run.

“It’s a good task for us early in the season because there is a long road ahead of us,” Escobedo said. “We’re looking good, we are looking sharp. Hopefully, we can keep doing things that we’re doing.”

Escobedo is one of four players on the team from nearby Eastlake High School. One of his Titan teammates, Leonhardt, went 4-for-7 in the doubleheader and contributed two doubles, including some insurance in the nightcap with an RBI single to score Escobedo.

Leonhardt said it is difficult to play in a doubleheader but knew the team could fight through it.

“It’s tough, but we’re a mentally tough team,” Leonhardt said. “It was all about the rest. Coming to the training room early, get in the game and be mentally tough. It’s never physical, it’s just all mental.”

The Scarlet and Black were effective with their backs against the wall over the weekend, with 16 of their 22 runs coming with two outs.

The Dons (1-2) came out early in the first game on Saturday, scoring three runs in the first inning. But, in the bottom frame, the Aztecs responded by scoring four, all with two outs.

Leonhardt said it is important for the team to keep innings alive with two outs.

“That’s huge,” Leonhardt said. “We want to be the best two-out hitting team in the country.”

The Aztecs were prolific striking out batters over the weekend, finishing with 17 in their win on Friday and achieving 15 punchouts in both games of Saturday’s doubleheader.

The strikeout parade was the first time in the Mountain West era that SDSU struck out 15 or more batters in three consecutive games. The 47 strikeouts are the most in three-game series since SDSU joined the conference.

“I think our pitching staff performed beyond expectations,” Martinez said. “You don’t expect to go 17, 15 and 15.”

The Aztecs season will return to the field with a game against UC Irvine on Feb. 19 at Tony Gwynn Stadium.