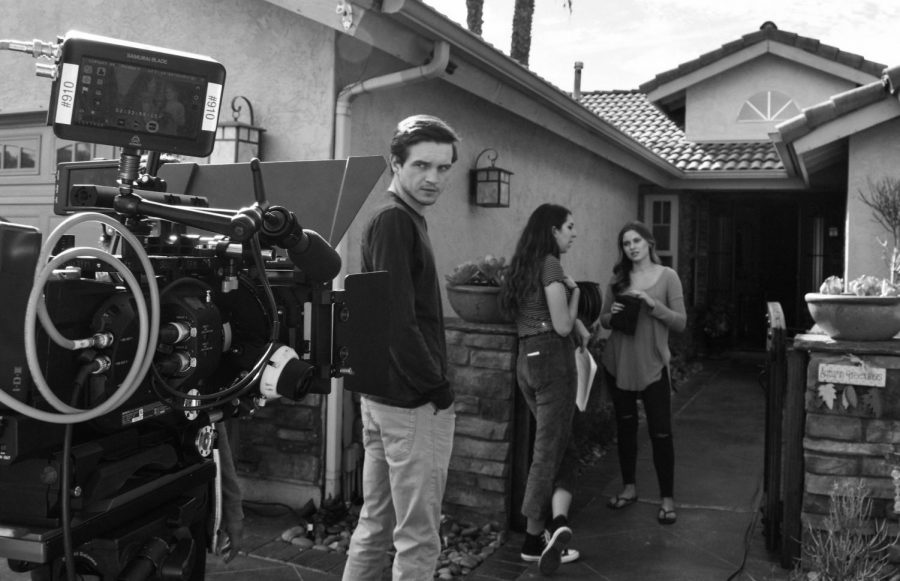 Erin Martinez, Ross Graham and Isabella Mangione work behind the scenes of “Alone Together.”

Despite the dreary weather outside, San Diego State’s Don Powell Theatre warmed up with the sound of laughter and the feeling of love on Feb. 14.

Each film, while very different in style, story and tone, contributed to the warm Valentine’s Day atmosphere by providing different perspectives on romance and love.

The selection of films ensured everyone in the audience would find something they liked, drawing from both recent and past student films.

The film that started the night off was “Sweet Tooth”, a stop-motion animation telling the story of a cartoon doodle come alive. The short film first premiered at the Emerging Filmmakers showcase in 2017.

“Sweet Tooth” was a close collaboration between friends, and SDSU alumni, Kelse Whitfield, Lucas Hespenheide and Marguerite Davidson. Since its premiere at SDSU, the short film has gone on to screen in 14 other film festivals in the U.S. and abroad.

“It is really cute that (‘Sweet Tooth’) is in the Valentine’s Day Film Festival because we like to call it a ‘true’ love story,” Whitfield, the film’s director, said.

The film is a playful twist on a love story, but when considering the process behind stop-motion animation, “Sweet Tooth” is a greater testament to these three friends’ love for cinema.

“We had to move the light by a quarter inch every single frame, and we had to have different gels for different colors,” Whitfield said. “The five-second clip took us almost an entire day to shoot.”

This short film approached the classic love story from a different angle. Martinez said she drew inspiration from her own experiences and decided to depict two people’s experiences after breaking up.

“I really wanted to focus on the idea of seeing the story from both sides,” she said.

The film achieves this through a split screen format, depicting two people’s separate but interconnected lives. This format created a unique set of challenges, Martinez said.

“It was really tricky because it was like we were making two films,” she said. “We didn’t have a lot of shots on each side of the screen, but combined, we had about 120.”

While “Alone Together” was not a film audiences would expect to see at a Valentine’s Day film festival, it was well complemented by the other films that played that night.

“Romance Is Dead” directed by Todd Jackson, uses music and singing to tell the story of someone trying to bring their lost love back to life, in the process realizing his friend was there for support all along. It put a comical spin on an issue that people unfortunately face.

“The Cactus and The Pansy,” directed by Sergio Duarte, uses clay animation to show how two people can eventually grow to love one another. While director Sean Brandt’s “A Pursuit of Falling” walks audiences through the emotional trials of trying to make a relationship work using emotive lighting and minimalist cinematography.

Whether they were musicals, dramas and comedies, all of the films screened at the Valentine’s Day Film Festival showcased a deep love for filmmaking and the art of cinema while also telling stories to which audiences could relate.

The next film festival to be hosted by the School of Theater, Television and Film will be the Spring 2019 of the Emerging Filmmakers Showcase May 15 and 16.