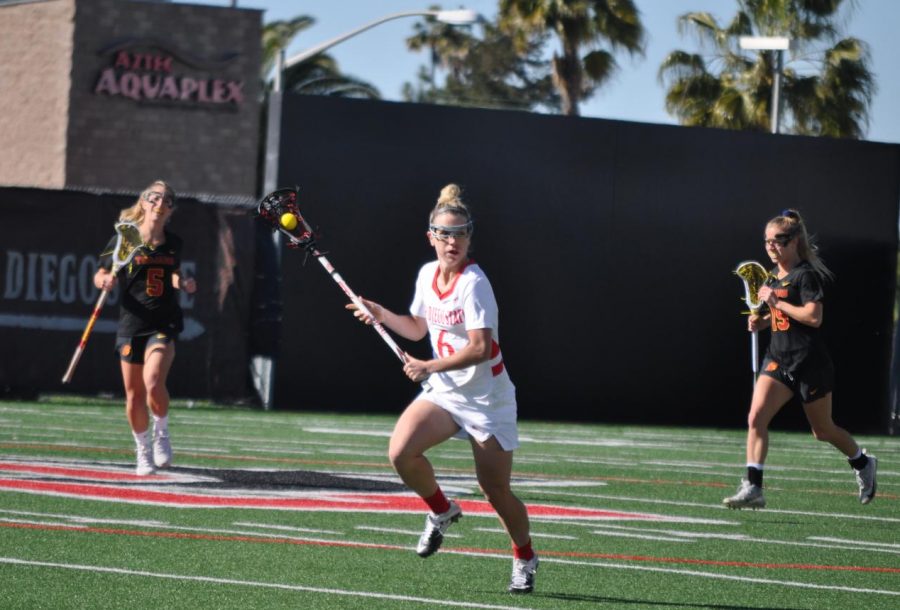 Midfielder Grace McGinity looks down the field during the Aztecs' 20-16 loss on Feb. 22 at the Aztec Lacrosse Field.

The Aztecs (2-1) suffered their first loss of the season after winning their first two matches against California and Oregon on the road in Las Vegas.

SDSU was unable to keep up with USC’s offense partly because of turnovers. Despite limiting the Women of Troy’s opportunities to score in the second half, time expired before the Aztecs could complete a comeback.

Head coach Kylee White said she was happy with the team’s performance in the final 30 minutes, but wished things could have stayed consistent throughout the entire match.

“I think our team really wanted this win and we knew we could do it,” White said. “Unfortunately in the first half the way we let the game happen to us put us in a bad situation.”

Even with the loss, the Aztecs had positives to take away from the match.

Freshmen Caitlin Jones and junior Taylor Sullivan combined for nine goals to step up for the Aztecs.

Sullivan said she was disappointed with the outcome of the match but proud of the team turning things around in the final period.

“I was really happy with how we played our second half,” she said. “I think if we just came out like that in our first half the outcome could have been different.”

Jones said at halftime the team did a nice job of cleaning up their mistakes and remained positive.

“I felt like everybody just changed their mindset and came out harder,” she said.

Redshirt junior goalkeeper Katy Sharretts placed herself in the SDSU history books by having 17 saves in the match, a new school record.

Early on in the match the Aztecs found themselves in a deficit after USC opened with four unanswered goals. The home crowd was so quiet the Aztecs might as well have been playing another away match. The only cheers that echoed on the field came from traveling fans.

White said she had a difficult time figuring out why the team could not finish scoring drives in the opening half.

“I struggled to understand why we couldn’t attack the same way they (USC) were,” she said.

At halftime, White said she kept the team composed by emphasizing that the second period was an opportunity for the players to change the outcome of the match.

“We talked about having no regrets and being able to finish the game the way we wanted to finish it,” she said.

Coming out of the half the Aztecs appeared to look like a new team that was filled with life.

In the final 30 minutes of play the Aztecs scored ten times while USC only had four goals. The momentum shifted and favored the home side.

Although the Aztecs fixed their mistakes and locked down on defense, the Women of Troy had done too much damage in the first half. SDSU had a total of 19 turnovers which ultimately prevented them from leveling up the score.

White said the team needs to improve on overall communication.

“I think we are a team that functions best when we are energized and communicating,” she said.

The Aztecs will now travel to face Columbia on Feb. 24 at the Sun Devil Lacrosse Stadium.