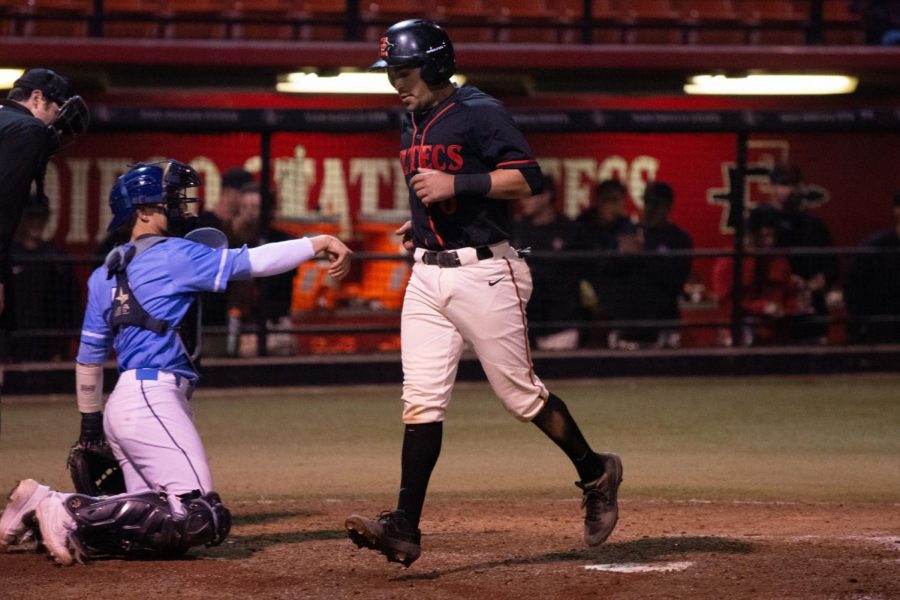 Senior infielder Angelo Armenta steps on home plate to score a run during the Aztecs' 4-2 loss against San Diego on Feb. 23 at Tony Gwynn Stadium.

San Diego State baseball found itself on the wrong side of a 4-2 finish against University of San Diego on Tuesday night, after a run-filled eighth inning at Tony Gwynn Stadium.

The Aztecs surrendered four runs in the top of the eighth inning and couldn’t climb all the way back, despite scoring two and loading the bases in the bottom half.

“The inning blew up on us because we can’t field our position,” Martinez said. “From the mound, we get a balk call and didn’t field a ground ball. We’ve got to give credit to USD. They beat us and I think we have a lot of room for improvement.”

USD’s junior third baseman Adam Lopez brought home the game’s first run on an RBI double that was hit to the left field corner with no outs in the top of the eighth inning.

Martinez replaced O’Sullivan with junior pitcher Adrian Mardueno, but he balked in Tora on a failed hidden ball trick after Tora advanced to third on single by sophomore first baseman Shane McGuire.

The Aztecs scored both of their runs in the bottom of the eighth with recording a hit.

Junior center fielder Julian Escobedo, who popped out in foul territory for the inning’s second out, said it was unfortunate that the team couldn’t take the lead at the end of the inning.

“It’s just unfortunate that we didn’t come out on top with bases loaded,” Escobedo said. “We have one out and we didn’t get the job done and we didn’t put up really good at bats, but that’s part of the game.”

Prior to his start, Eden had logged 5 1/3 innings with an 1.69 ERA in three relief outings.

Martinez said Eden still has room for improvement after his performance.

“He did a good job pitching, keeping them off balance,” Martinez said. “He can be a special, special talent. He still has some things he has to grow up to, he’s a freshman and we’re looking for big things from him.”

Eden’s night began with the Toreros threatening to score, but the freshman was able to strand four men on base in the first three innings before he found his rhythm.

USD had runners reach second and third base in the top of the second inning, but Eden got Lopez to pop out in foul territory to escape the threat.

In the top of the first, Eden stranded freshman Cody Jefferis on second base after getting sophomore right fielder Shane Ricketts to foul to left field. He later got Ricketts to strand sophomore center fielder Tora Otsuka on second base to end the USD threat in the third inning.

Eden said it took mental toughness and faith in his teammates to get out of the situations.

“It just took being mentally tough,” Eden said. “Worrying about the things I could control and just trying to throw strikes knowing that my teammates have my back.”

The Aztecs left six runners on base through the first eight innings.

Fein was left on first base to end the second inning when junior center fielder Jacob Maekawa struck out swinging for the inning’s third out.

Escobedo said the team lacked offensive energy in their loss.

“A lot of energy just wasn’t there tonight,” Escobedo said. “A big rivalry playing USD, but things didn’t come out as planned.”

SDSU will play at Air Force on March 1 in the team’s first MW conference game of the season.