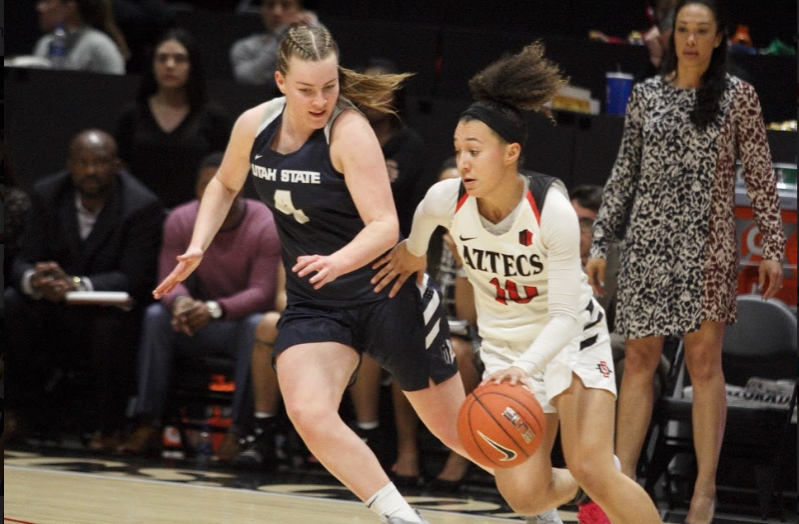 Sophomore guard Naje Murray attempts to drive around a Utah State defender during the Aztecs' 65-52 loss on Wednesday night at Viejas Arena.

The Aztecs trailed by four with just under seven minutes to play, but the Aggies pulled away with a 15-3 run to end the game.

Utah State wasted no time going for its revenge, shooting for 50 percent from the field in the first quarter while outscoring the Aztecs 19-6.

Sophomore guard Téa Adams scored all of the Aztecs points in the opening quarter, and said they were not as prepared as their opponent this time around.

The Aztecs were down by as many as 16 points in the second quarter, but the team picked things up defensively by holding the Aggies to just 25 percent shooting.

A 15-2 run got SDSU within three points, but Utah State answered with a 5-0 run to end the half and went into the break with a 29-21 advantage.

Freshman guard Mallory Adams, who is averaging 13 points per game, did not score her first points until the third quarter.

Adams finished with 10 rebounds and nine points on 4-for-4 shooting, and said things began to feel better in the second half.

“The first half was just weird,” she said. “Things just really opened up when they started pressing, because a lot of the guards would be behind me and I would get an open look right off the high post.”

The Aztecs outscored the Aggies 15-12 in the third quarter, but turnovers haunted the home team in the fourth.

Utah State finished the game with 20 points off 19 SDSU turnovers.

SDSU also struggled to keep up from the free-throw line, where Utah State outshot them 82 percent to 53 percent.

Téa Adams said free throws have been a focus for the team.

“We have emphasized free throw percentages a lot the second half of the season,” she said. “We’ve been really focusing on trying to get it better… obviously it hurt us tonight.”

The Aztecs will look to return to the win column when they travel to play at San Jose State on March 1.