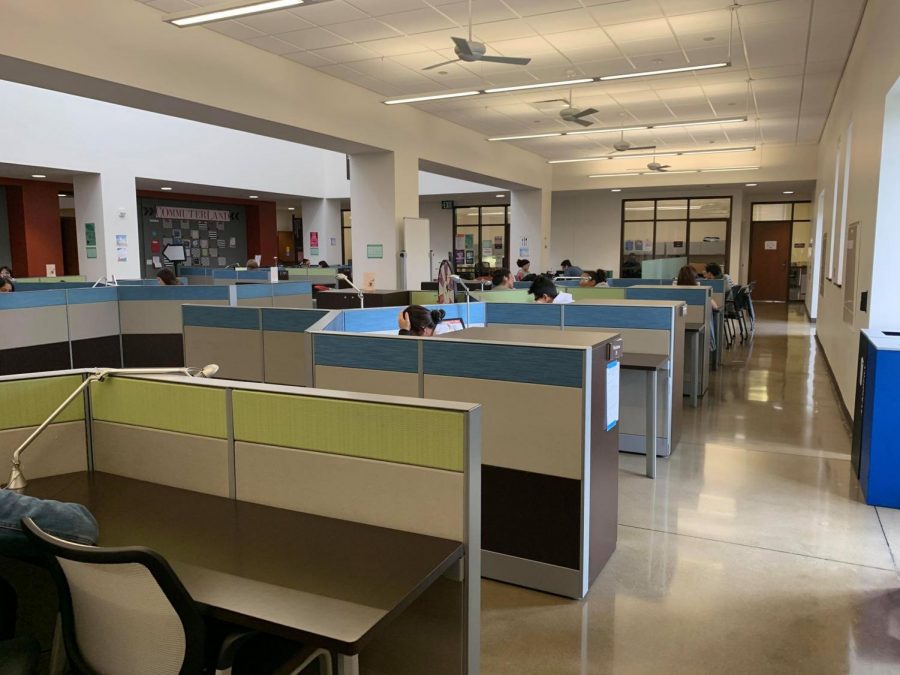 The Commuter Life Center is located in Student Life and Leadership in the Student Union.

Commuter students have to plan their classes around their day to day schedules, which involves both extracurricular activities and work.

The Commuter Life Center located in the Student Life and Leadership building within the Conrad Prebys Aztec  Student Union, offers mentors to freshmen and sophomores, along with activities, campus resources and a place to study or hang out while on campus.

“I know students that have to cross the border at four in the morning to get here,” Assistant Student Life Adviser Omar Baza said of some of the students that commute to campus. “People come from as far as TJ. You have to take into consideration, that you have to get in line cross the border, and then if you’re taking the trolley, you go to downtown and over, and it can be several hours.”

“Some students may live as close as fifteen minutes from campus, but they are still considered commuter students, according to San Diego State,” Baza said. “It’s a process, learning to balance things, and learning year by year what really works.”

There are about 700 students that are currently being mentored, according to Rogelio Becerra Songolo, Overseer of Commuter Life at SDSU. The program works with different academic departments on campus, serving an average of 1,500 students by helping to build a community they can connect with.

Becerra Songolo was a commuter student himself.

“I’m an immigrant, not first generation, but my dad went to college in Mexico, so I have a good understanding of what a low-income student and first-generation student, or minority student can experience as they undergo college,” he said. “I’ve always believed in giving back.”

This is what led Becerra Songolo to the position he now holds at SDSU.

“When I was in community college, there wasn’t a support system that I knew of, so I really had to figure it out by myself,” he said.

Becerra Songolo then transitioned from community college into a four-year university.

“It was a little rougher,” he said. “I had to learn how to time my meals, make food and making sure (meals) would last more than two days, along with working.”

Eric Marx, a sophomore SURGE mentor and fifth-year aerospace engineering senior, said this specific program is designed to connect sophomore students, give them a sense of community and provide them with resources on campus.

“We try to give them a home away from home,” Marx said. “We don’t want them to feel ostracized on campus, and I know that was how I was my sophomore year until I got involved in the program.”

Marx is now in his third year as a mentor. He said with more knowledge of the program, students get more chances to be involved.

“As a commuter student, there’s a lot you’re just not going to know with what goes on, or resources available to you,” Marx said.“I had no idea about half of the stuff that I’m passing on to the students I mentor, but, it’s great that they’re getting that at this age and not having to figure it out on their own, to make mistakes that could end up messing up their college careers, potentially.”

As a mentor, Marx meets with students in 30 minute to one hour sessions, every other week, eight times a semester. Meetings range from something more serious to focus on, to just checking in and seeing how the students are doing.

“A lot of the students join the program and they’re expecting something from it, like a curriculum,” Marx said. “That’s how we were, way back when, but now we’re more of a resource center, where we help students figure out what they want to pursue, and which pathway to take.”

Baza, whose previous title was Graduate Assistant for Sophomore SURGE, added that besides mentors, they have two to three activities each week hosted in Commuter Life, which ranges from cookie decorating, financial literacy, study abroad, academic advising, pizza power hour, coffee hour or morning muffin mania, just to build commodity with the students.

Commuter Life is also open through extended hours, Monday through Thursday from 8 a.m. to 8 p.m., and Fridays 8 a.m. to 4:30 p.m. Students can come in anytime throughout the day and hang out in the lounge, watch television or study, with access to the microwaves and refrigerator.

“We want students to have a safe space to hang out,” Baza said.

He said being a commuter student was simply learning to balance his time.

Baza and Marx both agreed that one of the main goals of Commuter Life is to be a home away from home.

There’s also more than one way to connect: download the SDSU app, attend sessions, or visit. If you’re a third year or higher, Marx suggests looking into applying for the mentor program, mentoring new students as they go through their first few years of college.

For Becerra Songolo, the decisions they make in the program can potentially change someone’s life.

“Step out of your comfort zone,” Becerra Songolo said. “Find time to really enjoy college, and be as involved as possible.”

The program also provides graduate students who take student feedback, innovating student communities as much as possible by working with mentors in the program.

“These communities are also meant to build that tight-knit group of friends that they (commuter students) are bound to know for the rest of their college experience here,” Becerra Songolo said.

“Come through and check it out,” Marx said, adding, “get an accountability partner, a mentor, a tutor, a friend. It all depends on what the student is looking for, and we try our best to accommodate them.”