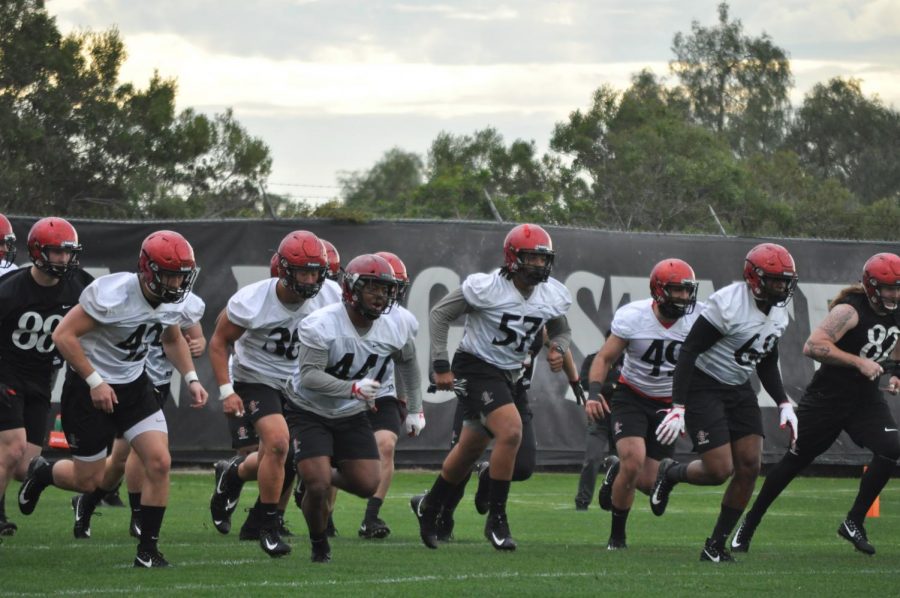 San Diego State football does sprints to warm up before a spring practice on March 5 at the SDSU Practice Field.

San Diego State football returned to the green turf of the SDSU practice field on March 4 for their first spring practice.

After an offseason of coaching changes, a new recruiting class and incoming transfers, SDSU football put that to test on the practice field for the first time in over two months.

Head coach Rocky Long said he would like the first day of spring ball to be a full-on scrimmage.

Unfortunately for Long, NCAA rules prevent him from doing so.

“It’s very disappointing because I’d like to go out there in full pads today and scrimmage,” Long said.

Long’s most recent hire, defensive line coach Brady Hoke, said he is also eager to get into a scrimmage.

“You only know how to play football by playing football,” Hoke said. “That’s a big part of it. We’d like to get in the pads as soon as we can.”

Hoke said the practice should benefit his young defensive line, one that lost three starting seniors from last season.

“The two days with no pads– it slows you down just a tick but not too much,” Hoke said. “You get a lot of fundamental work done that way.”

The first two practices only allow players to be in shorts and helmets, no shoulder pads. It won’t be until Thursday when the Aztecs are allowed to be in full shoulder pads.

NCAA rules allow teams to only go live and full contact 20 percent of the time during spring practice, adding to Long’s dismay.

A spring practice is similar to a practice during fall camp when players are not wearing pads.

All players stretch and warm up as a group to begin then split into their respective positions.

The practice field is divided up by each positional group, doing drills unique to that position.

After positional drills take up the majority of the practice, the day ends with an eleven-on-eleven scrimmage.

The scrimmage was all touch and no tackle. Quarterbacks were especially not to be touched or hit.

On Tuesday, once scrimmage ended, the entire team had some fun and gathered around the end of the field to participate in a high jump exhibition.

Teammates’ reactions were ecstatic, whether or not the player cleared the bar or not.