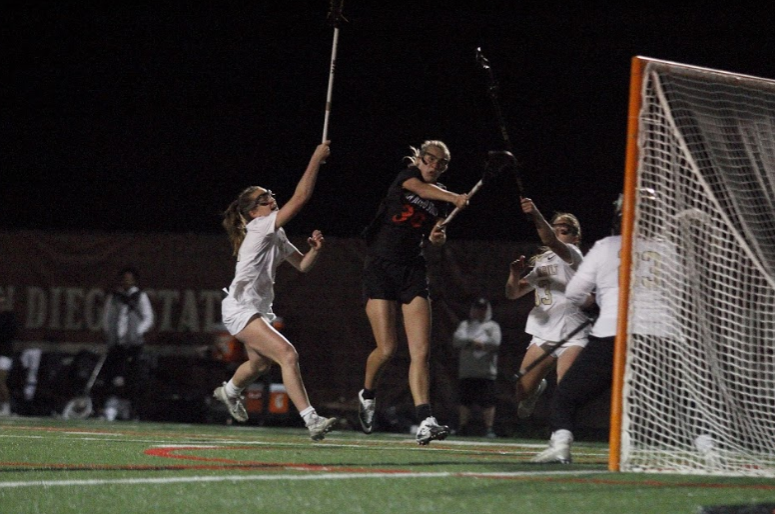 Sophomore midfielder Bailey Brown takes a shot during the Aztecs 15-14 victory over Vanderbilt on March 8 at the SDSU Lacrosse Field.

San Diego State lacrosse defeated Vanderbilt 15-14 on March 8 at the Aztec Lacrosse Field. The Aztecs (5-1) handed the Commodores (5-1) their first loss of the season after senior midfielder Harlowe Steele sealed the victory with a golden goal 33 seconds into the second period of overtime.

Most of the match appeared to be a defensive battle with each side trading goals one after another. After the first period the Commodores led seven to six over the Aztecs. Neither team led by more than three goals while there were six ties and three lead changes. At the end of regulation both teams were tied at 14 points each which sent the Aztecs into their first overtime game this year.

Head coach Kylee White talked about having a “warrior spirit” before the match and was proud to see her team push through the twists and turns of the game.

“They were focused, determined and had that team first mentality,” she said. “It was just fun to win in that fashion, just gutting it out.”

White was filled with emotion as she watched Steele score to secure the Aztecs their third win in a row.

“It was awesome to have her (Steele) hit the game winning goal,” she said. “She was everywhere. I feel like she was just so focused.”

Steele had a total of two goals along with a career high three assists in the match while tallying up nine draw controls, which is ranked second all-time on the team’s single-game charts. She has 11 goals and four assists on the season.

Steele appeared to struggle finishing her chances as a result of the physicality the Commodores brought on defense. Vanderbilt forced Steele to commit two turnovers while imposing seven of her nine shot attempts to go off target.

Despite the mistakes throughout the match, Steele said it was her teammates which inspired her to not give up and keep trying.

“It’s easy to get down on yourself when you’re missing those shots,” she said. “When you know the people that you’re on the field with and they know you can do it, it just gives you confidence to keep going.”