Aztecs overcome poor shooting to escape with 63-55 win over UNLV, advance to semis of MWC Tournament 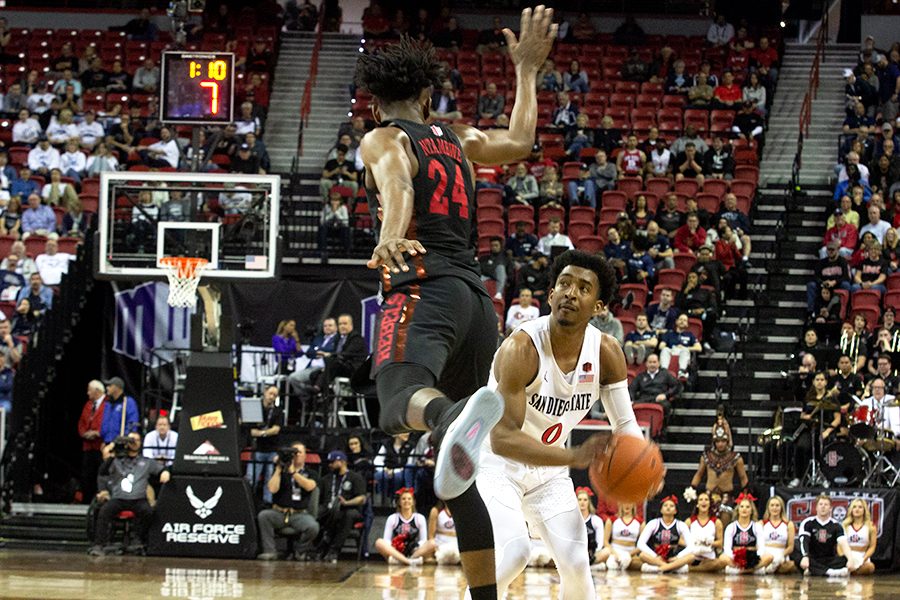 Senior guard Devin Watson pump fakes the defender during the Aztecs' game against UNLV on March 14.

Survive and advance was the name of the game for San Diego State men’s basketball during the quarterfinals of the Mountain West Tournament.

SDSU was locked into a 47-47 tie with UNLV with just under four minutes to play, but the defending tournament champions finished on a 16-8 run to come away with a 63-55 victory on Wednesday afternoon at the Thomas and Mack Center.

It was the Aztecs’ 15th win in their past 16 meetings with the Runnin’ Rebels, a team SDSU has now beaten eight straight times in the tournament.

‘We have a lot of good memories in here,” head coach Brian Dutcher said.

The catalyst for SDSU’s end-of-game run came courtesy of senior guard Jeremy Hemsley, who had missed his first eight shots before hitting a 3-pointer from the top of the arc to give the Aztecs a 50-47 lead with 3:37 to play.

It was the only made shot all night for Hemsley, who finished 1-for-9 from the field to contribute to an abysmal 30 percent shooting night for SDSU, but the longtime Aztec said his teammates never lost faith in him.

“Even with me missing the shots, not one time did I hear to stop shooting or to stop being aggressive,” he said. “I’m comfortable taking that shot if the clock is winding down.”

The Aztecs would not relinquish the lead again before ultimately securing the victory at the free-throw line.

Despite shots not falling, the bright spot for the Aztecs’ offense was sophomore forward Jalen McDaniels, who finished with 25 points on 8-of-14 shooting to go along with 14 rebounds.

McDaniels had already secured a double-double with just over 10 minutes to play in the game, and he credited the players around him for his big statistical night.

“My teammates just put me in the right position for me to score,” he said. “If I’m at my spot I’m going to take it and make it most of the time.”

McDaniels, along with senior guard Devin Watson, provided nearly all of the offense for the Aztecs to start the game, with the duo combining for 25 of the teams 26 points going into the half.

Watson, who finished with 19 points, four rebounds and four assists, made arguably his biggest play when he faked out junior forward Nick Blair on a pump fake from behind the arc, drawing a foul —and draining three free throws— which extended the Aztecs lead to 55-49 with just under two minutes to play.

It was the second such play for Watson in the game, who got up from the floor with a big smile on his face, and who said his ability to draw the foul comes from the respect his opponents have for his game.

“I’m not surprised that they still go for it, because they know I’m a good shooter,” he said. “Normally they jump straight up, but he jumped forward. So, I knew I was going to get him.”

The Aztecs took a 26-24 lead into the half, despite shooting just 26 percent from the field in the opening period.

Watson and McDaniels accounted for all of the team’s field goals, combining to go 7-for-13 while the rest of the team went 0-for-14.

McDaniels and Watson had 15 and 10 at the break, respectively, while the only other score came on a made free throw from freshman forward Nathan Mensah.

The Runnin’ Rebels finished with an only-slightly better 30 percent shooting in the opening period and held a 28-to-17 rebounding advantage, but committed eight turnovers to the Aztecs four.

UNLV led for less than three total minutes in the first half, but threatened to take the lead going into the break after a 3-pointer by Clyburn gave the team a 24-23 lead with 31 seconds left.

McDaniels answered on the other end, however, knocking down a 3-pointer as the buzzer sounded to send SDSU into the locker room with the advantage.

Next up for the Aztecs is a date in the semifinals with No. 17 University of Nevada on March 15.