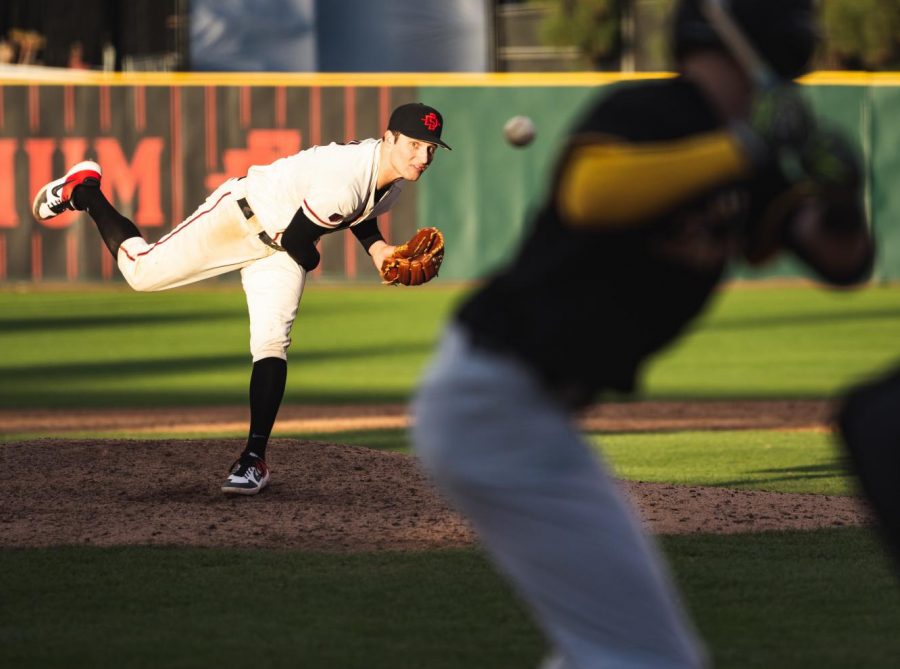 San Diego State baseball had a chance to bring in an insurance run in the bottom of eighth inning as the team held on to a 6-5 lead against Seattle University, but instead of one run, the team got five en route to its 11-5 series sweeping win over Seattle University (4-15) on March 17 at Tony Gwynn Stadium.

Fellow sophomore left fielder Matt Rudick drove in five RBIs in the win, which included his bases-clearing triple in the eighth inning.

“(Rudick) had a really good day. The bases loaded triple kind of had us breathe a little bit easier,” Martinez said.

Before his triple, Rudick doubled to bring in two runs during a four-run fourth inning for the Aztecs.

Rudick said he tries to get on base as the team’s leadoff hitter, but against the Redhawks, everyone got on base for him.

The 3-for-5, five-RBI day capped off a seven-RBI weekend for Rudick, one that began with him delivering the tenth inning walk-off hit in the Friday, March 15 win.

Martinez said Rudick has been a valuable player for to the team.

“(Rudick’s) just a really good baseball player,” Martinez said. “He understands how to play, he manages his at-bats, he’s a vicious out, he has vicious at-bats all the time and it’s nice to have him at the top of the lineup.”

Schmitt’s day at the plate began with a solo home run in the second inning. He then drove in freshman first baseman Brian Leonhardt from third base in the fourth inning for an RBI and added a double and a single later in the ballgame.

As a pitcher, Schmitt limited the Redhawks to two runs on four hits in five innings of work, adding six strikeouts.

Schmitt said he mentally separates his performances as a pitcher and as a hitter.

“He kind of had to grind through some adversity on the mound and offensively he had four hits,” Martinez said. “He’s capable of doing that. He’s a freshman All-American from last year, and he’s starting to enjoy playing the game and it shows in his performance.”

Leonhardt, SDSU’s usual first baseman, made his third relief outing of the season when he replaced Schmitt on the mound in the sixth inning. He provided his team with two innings of work and one allowed run on two hits.

Martinez said the Aztecs could utilize two-way players with their depleted bullpen.

“The way our pitching staff is so depleted right now,” Martinez said. “That’s kind of what we’re going to see down the stretch here.”

Next, SDSU will play on the road on March 19 at Loyola Marymount and then to New Mexico for a three-game series starting on March 22.

Martinez said the three-game sweep builds momentum for the team before they head on the road.