A.S. presidential candidates face off in last day of debates 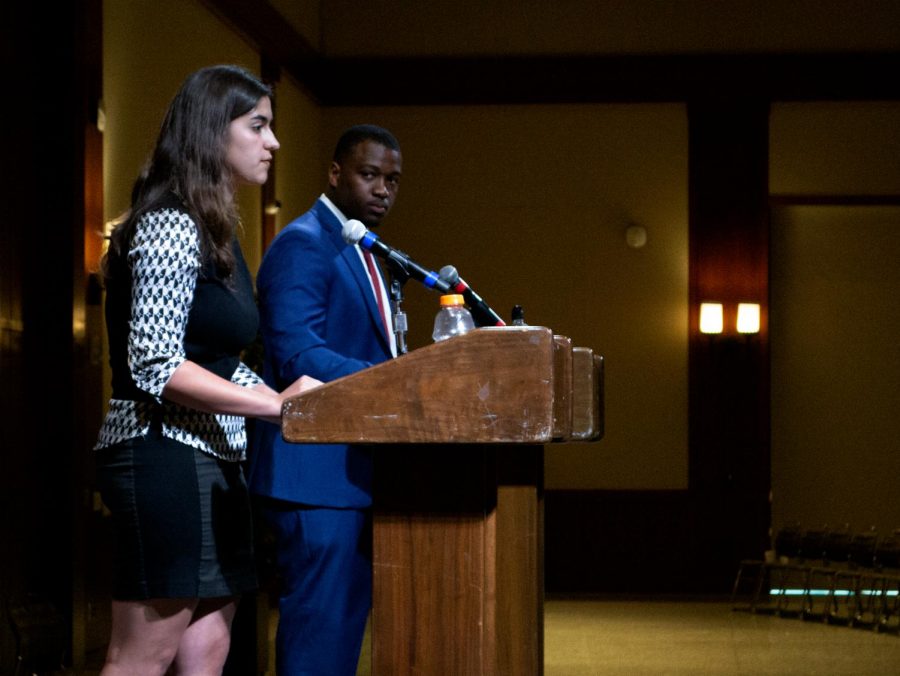 Presidential candidates Mariya Nadberezhna and Christian Onwuka debate in Montezuma Hall on Wednesday, March 20. The debates were moved out of the Conrad Prebys Aztec Student Union due to inclement weather.

At the final Associated Students debate before voting opens next Monday, the candidates for A.S. president faced off through discussion of issues such as racial insensitivity on campus, the Sophomore Success Initiative and inclusivity.

An otherwise mellow debate, the most prominent point of disagreement came with a question on how to address racial insensitivity on campus. This comes after a March 2 incident where a video was posted on Twitter of “the n-word” being shouted at the Black Resource Center by a group of passersby.

Presidential candidate and communications and Russian language senior Mariya Nadberezhna began by condemning the act and saying there should be a required course for students that addresses these kinds of insensitivities. Fellow presidential candidate, current A.S. Vice President of Financial Affairs and finance senior Christian Onwuka said, while he also condemns the act, he disagrees with this solution.

Rebutting this response from Onwuka, Nadberezhna said his vision for creating change is unrealistic.

“Sometimes, that’s not how it works which is unfortunate,” Nadberezhna said. “I know people in Eastern Europe that don’t want anything to do with it and I feel that having a requirement, even though it is maybe forcing people to do so, it’s really something that is really necessary for people to be aware.”

However, on all other points in reference to inclusion on campus, the two candidates were largely on the same page. Both candidates placed a strong emphasis on a promise to work closely with San Diego State’s identity centers, including places such as the Black Resource Center and the Women’s Resource Center.

When asked how they will prove to students that this position is about more than just an image to them, Onwuka said the way he will prove this is easy.

“I’m just going to do what I’ve been doing,” Onwuka said, emphasizing that this very much includes an intent to work with identity centers.

In reference to student DACA recipients, Nadberezhna said working with underrepresented groups of students in this way should be one of the central functions of a public university.

“There is a reason people are trying to get out of the situation they are currently in and one way to do that is by going to a university,” Nadberezhna said.

Another topic of conversation was the issue of low-income students, something that has been discussed more heavily on campus as of late due to recent outrage against the Sophomore Success Initiative. As this program requires non-local students to live on campus for their first two years at SDSU, some students have said this causes problems for those from low-income backgrounds.

Nadberezhna said while the program is intended to promote a greater sense of community and success on campus, the financial stress it could result in cancels out any progress that may occur.

“It really is expensive and I know that’s one of the most distressing things to students nowadays is the cost,” Nadberezhna said. “Requiring students to (live on campus) for two years for increased campus engagement fails to consider that student housing costs are at an all-time high.”

Onwuka said he agrees the program is too costly to students despite having good intentions.

Nadberezhna and Onwuka will face off in the polls throughout the March 25 to 28 student voting period. Voting takes place online in the SDSU Web Portal.