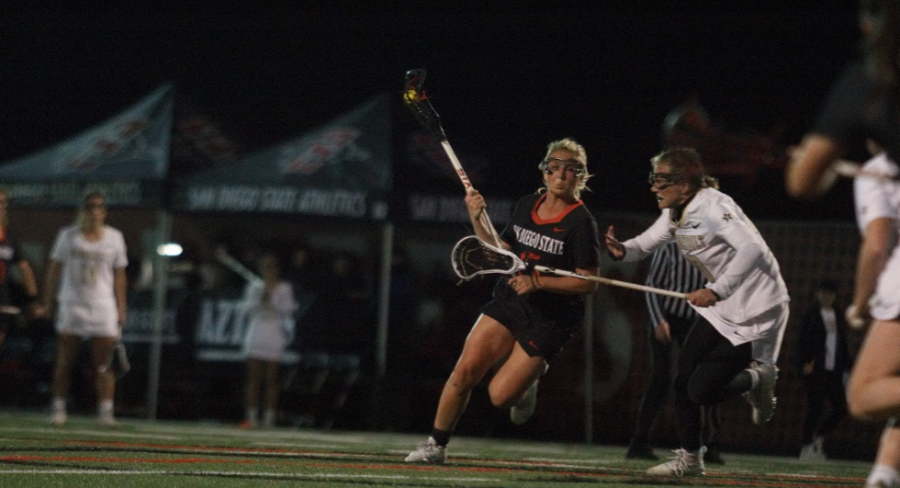 Junior midfielder Taylor Sullivan handles the ball during the Aztecs 15-14 victory over Vanderbilt on March 8 at the SDSU Lacrosse Field.

The Aztecs are off to their best start in program history after posting an 8-1 overall record.

Sullivan was recently named the Mountain Pacific Sports Federation Defensive Player of the Week after performances against Bucknell and LIU Brooklyn in which she had a combined two hat-tricks, five forced turnovers, seven draw controls and two ground balls.

“She is the most consistent player on our team right now,” head coach Kylee White said. “She is the same person game after game and we know that we can rely on her.”

White said Sullivan is the exact type of player the Aztecs need.

“She’s very driven. She knows exactly what she wants,” she said. “She’s positive all the time. She’s a smiley, easy going person that people can go to and then she’s a demon on the field.”

Through nine games Sullivan has a total of 25 goals, 15 ground balls, 16 draw controls and 26 points earned.

The Maryland native earned the third weekly conference honor of her career and sixth overall for the team this season.

“It just felt good that all of the practices we have been doing have really been paying off,” Sullivan said.

From a young age, Sullivan had passion for the game of lacrosse.

“It’s always just been a sport that I really loved,” Sullivan said. “I love to compete and I love playing midfield because you get to be on both the offensive and defensive side.”

Sullivan said she chose to play for San Diego State because of the atmosphere.

“The coaches I really loved, they were just really like family-oriented and same with the team,” she said.

In five of her nine matches played this year, Sullivan has scored three or more goals compared to just one match last season.

The junior said her parents inspire her to play at a high level every week.

“My mom and dad in terms of always working hard and just always putting my greatest effort,” Sullivan said. “Always being the best that I can be. My parents have always taught me that.”

Sullivan said she has worn the number 15 throughout her career because of family ties.

“My mom wore 15 when she played sports so it was just something that I loved about the number,” she said.

During her time at Broadneck high school, Sullivan was the only multi-sport athlete to play in two state championship games for both lacrosse and soccer.

“It was awesome, I loved soccer just as much as I love lacrosse,” Sullivan said. “It was really cool being able to play both sports.”

With seven games left in the regular season, Sullivan said she wants to finish strong and help her team win.

“I just want to make sure that I’m making my presence on both the offensive and defensive side,” she said. “(Last year) I think my goals weren’t going in as much so I’m trying to make it this year more of a point to not overthink it and put the ball in the back of the net.”