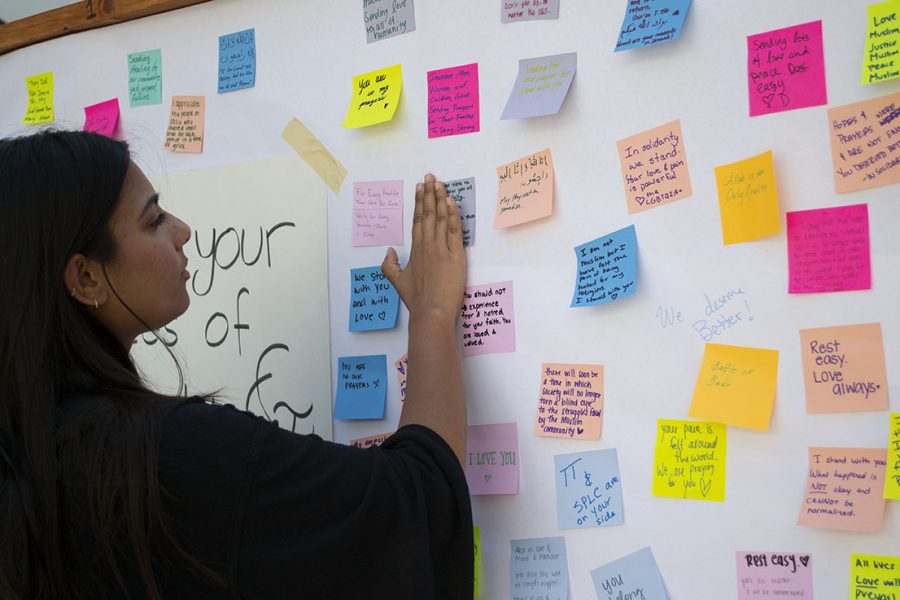 A student placed post-it with words of support on a wooden board in the student union on March 25.

In a display of solidarity following the shooting at a mosque in New Zealand, San Diego State’s Muslim Student Association took a few hours to honor those who lost their lives by praying and spreading notes of support.

What group members cited as a last-minute effort ended up being a huge success, as the event’s location in the middle of Conrad Prebys Aztec Student Union after 10 a.m. Monday attracted many passersby.

The main attraction was three wooden boards in the middle of space, featuring post-its with words of support written by students as well as the faces of those who lost their lives in the New Zealand, Pittsburgh and Charleston shootings.

“I am not Muslim, but I have felt the pain of being hated for my religion,” one of the post-its read. “I stand with you.”

Muslim Student Association President Leena Elmaleh said part of the intent in including information about shootings other than just the one in New Zealand was to show the scope of the issue and how endangers those of many religions.

While New Zealand is thousands of miles from San Diego, interdisciplinary studies senior and member of the Muslim Student Association Subrein Damanhoury said one of the primary goals of the event was showing these kinds of issues are still close to home.

“A couple of weeks ago at the New Zealand attack that had happened, more than 51 people lost their lives,” Damanhoury said. “So, we didn’t really want to make the event just about us, about Muslims and how we were affected by it because we felt like this was much bigger than just us. This was not an isolated incident.”

Aside from the display, the event also featured a few speakers and a moment of prayer.

As most students walked past the event without breaking their gazes from their phones, participants in the event said these people are part of the problem. SDSU freshman Mawadda Ismail said she thinks the Muslim community deserves better.

“Not to be harsh, but silence is complacency,” Ismail said. “And at the end of the day, if something happens to another student on this campus, obviously everybody would want all of the students to show their support. I just feel like on this campus we lack unity.”

Aside from a March 15 campus-wide email from Chief Diversity Officer Luke Wood announcing the university’s solidarity with the Muslim community in light of the shooting, the campus has been mostly silent on the issue.

Neuroscience senior Maryam Dakhil said this is an issue she sees not only on campus but in the larger San Diego community.

“I just felt like this is the only outlet,” Dakhil said. “I live in San Diego. I’m a local. And this is an outlet where the students are involved, where we can talk about what happened with New Zealand and stuff and have it brought to our fellow students.”

Editor-in-Chief Will Fritz contributed to this story.