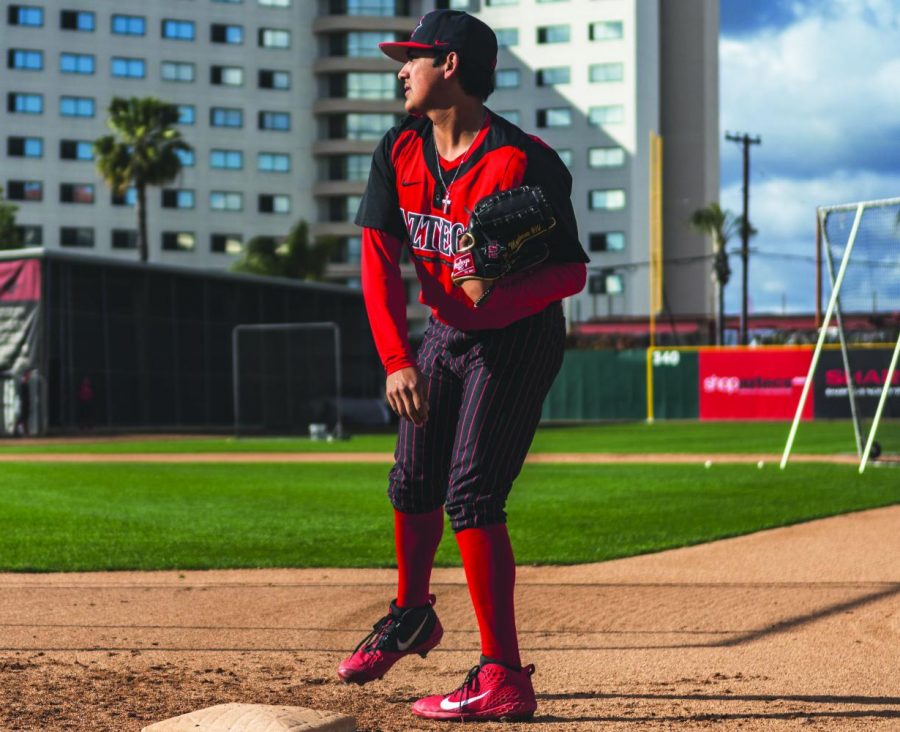 When Adrian Mardueno finds himself in tough situations on the mound for San Diego State baseball, he steps off and reads a message he has written on the side of his glove:  “I ♥ U MOMMA.”

The message is inspired by Mardueno’s mother, who was recently diagnosed with cancer, and it helps the junior pitcher refocus before getting back on the mound.

“I step off every time and any time something is going wrong,” Mardueno said. “I step off, I look at my glove and read that in my head, and that just clears my mind.”

All of which came around two weeks after he learned the news about his mom.

Mardueno said his mother has motivated him when he gets the call out of the bullpen.

Mardueno continues to thrive on the mound and extended his streak of consecutive scoreless innings to 15.1 after a clean inning against Cal State Fullerton on April 12.

He also lowered his ERA to 1.46 and his opponent’s batting average to .136, putting him atop the Mountain West Conference in both categories.

“He’s a very driven young man and a focused young man,” Peraza said. “He’s able to separate his emotions outside of baseball and school. It just shows the kind of character that he has to keep his school and baseball commitments while dealing with such a heavy issue.”

Peraza said the coaching staff understands the difficulties Mardueno is facing and if he needs to step away from the team for a short time.

“All we can do is support and let him know that we’re here for him,” Peraza said. “And if he wants to take a day off from the team and be with his family he’s more than welcomed to do so.”

Along with the Aztecs coaching staff, Mardueno’s teammates have said they will be there to support him in any way possible.

This includes sophomore pitcher Casey O’Sullivan, who said the team can provide support for Madeuno due to their strong bond.

“He’s got 25 brothers around him that are willing to do anything that he needs to help him through this time. We’re really just a big family,” O’Sullivan said. “We’re here for so many hours a day together and living on campus together that we’re kind of a family that is away from home.”

Mardueno said in order to keep his success going, he must have the same mindset when he steps on the mound.

“(I need to) just have the same mentality that I’ve been having every time I go out there,” he said. “And, like I said, do it for my mom.”