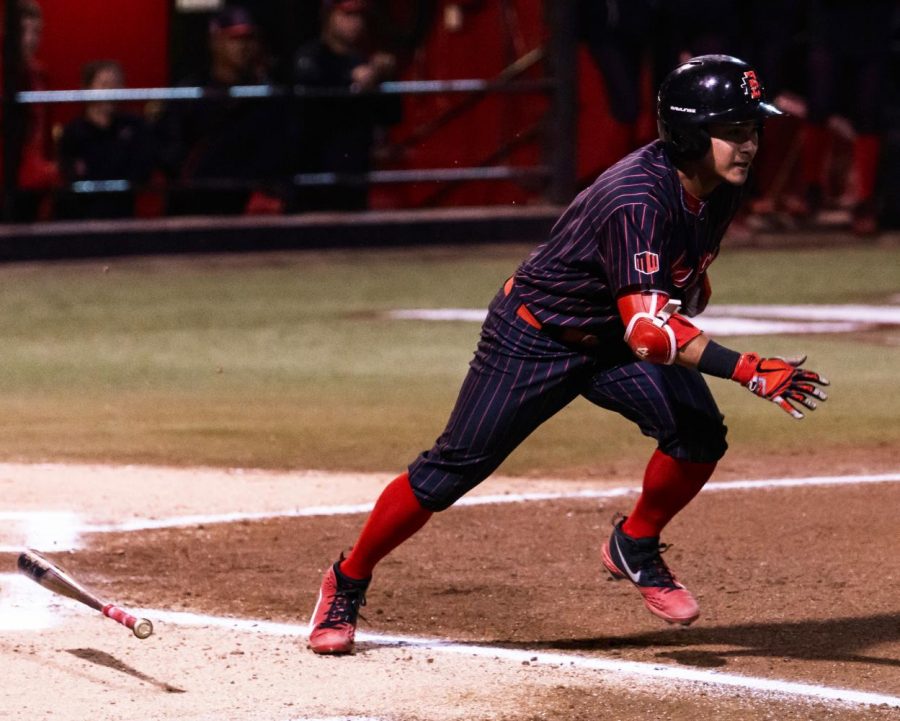 Sophomore outfielder Matt Ruddick runs down the first base line during the Aztecs' series against Nevada from March 8-10 at Tony Gwynn Stadium.

San Diego State baseball played two games, but only came away with one victory in a double header against Air Force on April 19 at Tony Gwynn Stadium.

SDSU won the second ballgame with a score of 6-3 after junior second baseman Mike Jarvis delivered a go-ahead RBI single in the bottom of the eighth that broke a 3-3 tie.

Sophomore left fielder Matt Rudick provided the insurance runs an at-bat later when he tripled to bring in two RBIs.

Jarvis’ RBI single was his only hit of the day, and he said it was relieving to help his team amid his struggles this season as he currently has a .239 batting average.

“I’ve been struggling a little bit, so it’s definitely a sigh of relief to help the team out any way I could,” he said.

Rudick finished the day with five hits and two RBIs between the two games, while raising his batting average to a team high .330 after the second game of the doubleheader.

Martinez said Rudick’s role as the leadoff hitter sets the offensive tone for the rest of the team.

“He’s the straw that stirs the drink,” Martinez said. “A lot of our offense centers around on how his success goes and, I’m not trying to put pressure on him, but it’s the truth. He’s a good baseball player, and he’s a phenomenal hitter.”

In both games, the Aztecs were aided by their starting pitching.

Senior Justin Goossen-Brown pitched 8.2 innings in the Aztecs’ losing effort. Then, freshman Michael Paredes allowed just one hit and one run through 6.1 innings in the second game of the doubleheader.

The outing by Goossen-Brown was the longest by any Aztecs starter this season.

Head coach Mark Martinez said the performances by Goossen-Brown and Paredes made up for the Aztecs’ low offensive numbers.“Splitting a doubleheader is not what we wanted, but it’s good to bounce back after a tough loss and get a big victory,” Martinez said. “Our pitching staff kept us in both games. We just couldn’t score any runs. The offense went dormant.”

Senior third baseman Nic Ready homered off of Paredes to give the Falcons a 1-0 lead in the first inning, but that was the only hit Paredes allowed throughout the rest of his outing. He was replaced with sophomore Casey O’Sullivan after he delivered consecutive walks to senior catcher Rob Dau and senior second baseman Colby Brown.

Paredes said there is still room for him to improve.

“I’m a little upset here and there with how it ended,” Paredes said. “The next outing, I’m going to go look out and just try to put it together when I’m coming towards the end of the game.”

The Aztecs found themselves down 4-0 in the second inning of the first game of the double header after a two-run home run from senior third baseman Nic Ready, a solo home run from senior designated hitter Daniel Jones and an RBI single from junior right fielder Ashton Easley.

Despite surrendering the four runs, Gossenn-Brown limited the Falcons to one hit and one run for the rest of the ballgame.

Martinez said the lengthy outing by Goossen-Brown prevented the Aztecs from having to go to use much of their bullpen in the first game.

“Goossen-Brown pitched into the ninth inning and he only gave up one hit after the second inning. He saved a lot of innings for us,” Martinez said.

The Aztecs play the final game of the series against the Falcons on April 20 at Tony Gwynn Stadium.