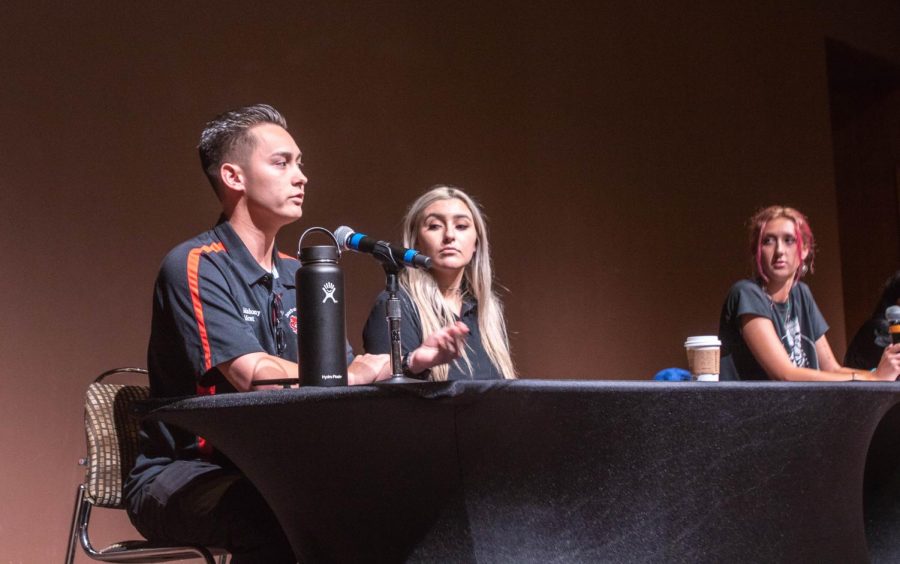 Hazing, sexual violence and discriminatory practices were among the topics the moderator, women’s studies sophomore Alison Aiken, and the audience brought up to the panel, which included United Sorority and Fraternity Council Vice President Nathalou Mejorada.

Aiken organized and moderated the event after interviews with several Greek members for a intersectional feminism project revealed some serious problems within their community.

Mahony fielded questions about known hazing practices in some of the IFC fraternities and Calise addressed the prevalence of discriminatory practices in the sorority recruitment process on the basis of physical appearance and race.

“This year we have full-on values-based recruitment,” Calise said. “We have established a very structured process.”

The panel comes at the close of a tumultuous school year for Greek life at SDSU.

“I don’t think enough people understand why we do the things that we do, they only know what we do, and sometimes that can get twisted,” Calise said.

Although many of the questions were directed more toward Mahony and Calise, Mejorada, the vice president of USFC – the council representing the 18 culturally-based fraternities and sororities – said the issues discussed by the panel are perpetuated by the entire Greek community, and that all councils are working hard to address them among their own chapters.

All three leaders used the panel as an opportunity to highlight philanthropy and community service completed by chapters in their council.

This fall IFC raised more than $35,000 and collectively completed over 7,000 hours of community service, Mahony said.

The panel occurred shortly after several of the councils appointed new executive boards who will work in the coming months to implement their vision for the Greek community at SDSU.

“I think that our community is moving in a great direction,” Mahony said. “I hope that we continue to do that.”