The Daily Aztec • May 1, 2019 • http://thedailyaztec.com/94504/sports/lacrosse-triumphs-uc-davis-to-win-second-straight-mpsf-championship/ 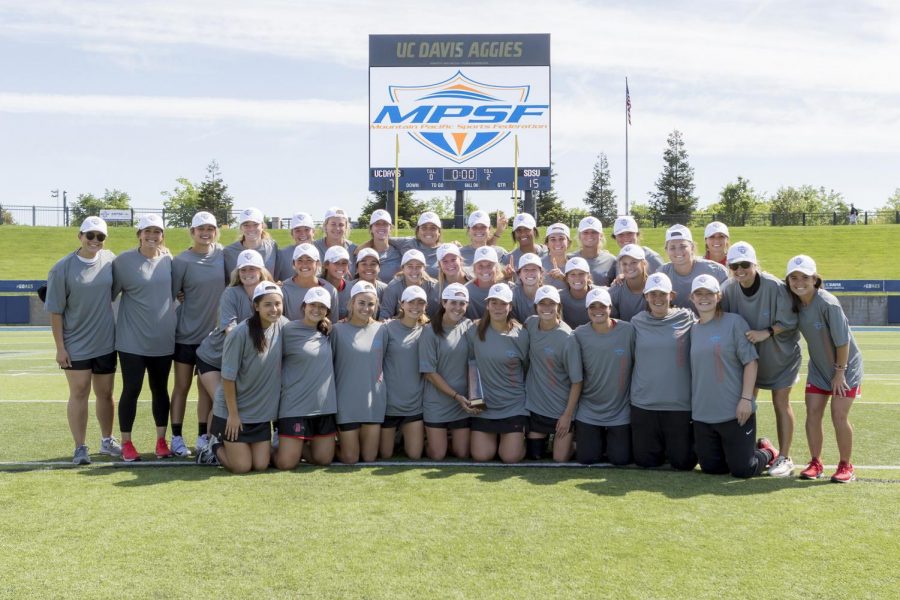 “It feels amazing. We had prepared well,” head coach Kylee White said. “We knew the game plan and more importantly we knew that if we played a good game together that we would win.”

Steele was named most valuable player of the MPSF tournament after tallying up a total of eight goals, six draw controls, four ground balls and forced three turnovers over the weekend.

Junior goalkeeper Katy Sharretts had 19 saves, which marks both a new personal and school record for most saves in a match. In addition to Sharretts’ milestone, this is the eighth game this season in which she has double-digit saves.

“Katy was unreal,” White said. “She was just composed and took the calculated risks that we needed her to take.”

The opening 15 minutes of the first period turned into a back-and-forth exchange of goals with the score tied at three points before Steele, senior attacker Kirstie Greenlaw and redshirt sophomore Lexi Tan quickly fired three goals into the back of the net to give the Aztecs a 6-3 lead heading into halftime.

Coming out of the break, the Aztecs’ offense swung into full gear by delivering 14 shots and ending the match on a 7-1 run.

The Aggies were unable to spark a comeback in large part due to SDSU senior midfielder Jenny Buckland defensively limiting Aggies senior midfielder Taylor Cuenin, who scored 47 goals in the regular season and was MPSF Player of the Year, to just one goal in the match.

SDSU evened the all-time head-to-head matchups against UC Davis (5-5) while also avenging their 16-12 loss earlier this season. The Aztecs have tied a program record of 11 wins in a season for the second year in a row.

“They are a hardworking, committed group,” White said. “It just shows that when you have a team that’s as close as they are that they can overcome those ups and downs of a season.”

The Aztecs will not be competing for the national championship in May. White said winning the conference does not automatically qualify the Aztecs for the NCAA tournament due to only three teams participating in the MPSF.

Finishing the season on a high note at the end of the day is what mattered most for the Aztecs.

“Win or lose we would’ve been united because this group of girls is amazing,” White said. “They love each other so much. It was 100% a team effort today. It just makes me so happy because they are an incredible group.”