The Daily Aztec • May 1, 2019 • http://thedailyaztec.com/94533/sports/column-baseballs-miscues-hampering-success-in-other-areas/ 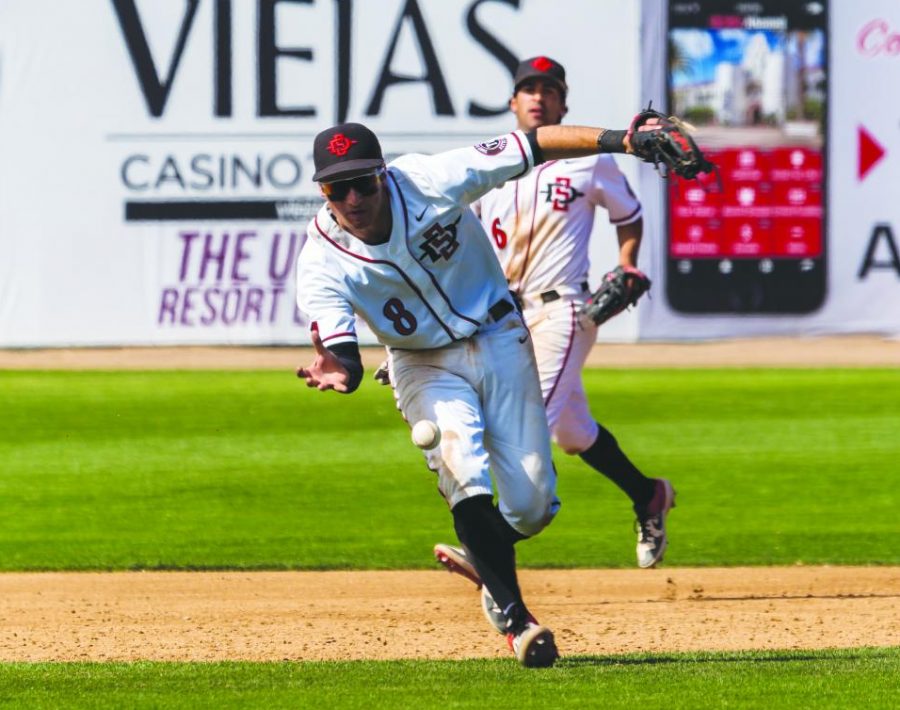 Then-sphomore third baseman Casey Schmitt makes a bareheaded throw to first base for the out during the Aztecs’ 5-4 victory over Air Force on April 20, 2019 at Tony Gwynn Stadium.

In certain sports like football, it is said that good defense wins championships.

In baseball, a team’s ability to play great defense may not necessarily propel them to a championship, but it certainly can keep them from one.

Defense has been a problem for San Diego State baseball this season.

SDSU has committed errors in 32 out of 45 games this year and have committed more than three errors or more in eight games. Among NCAA Division I teams, the Aztecs rank below 200 in the standings among 297 teams in fielding percentage.

Despite having a .550 winning percentage and sitting within reaching distance of Fresno State for first place in the MW, the Aztecs need to improve on the fundamentals of fielding if they want to capture this year’s conference title.

Poor fielding was in large part the cause for the Aztecs’ 5-1 loss to UNLV on April 28. Errors by senior shortstop Angelo Armenta and junior second baseman Mike Jarvis cost the Aztecs four runs.

The Aztecs committed a total of 10 errors in a three-game series against Seattle University,  committing four errors each in wins over the Redhawks on March 15-16.

Head coach Mark Martinez said defense was one of the things the Aztecs needed to improve on following the series sweeping win against Seattle on March 17.

“We’ve got to continue to get better,” Martinez said. “We all have areas we’ve got to improve in. We’re still making a lot of errors, and that’s due to our inexperience.”

Another poor defensive outing for the Aztecs came in an 11-6 win against MW-leading Fresno State on April 1. The Aztecs committed five errors, the second time they have so this season – resulting in two unearned runs.

The poorest stretch of defense came during a 12-game period that began with a loss against San Diego on Feb. 26 and ended with a win against Seattle on March 16.

SDSU was responsible for 27 errors — including an error in every game —  during that stretch.

Improving on their defensive play can help the Aztecs limit extended innings and preserve arms in an injury-depleted pitching staff.

Martinez said the blame for the high number of errors falls on the coaches after the Aztecs committed five errors in a win against Fresno State on April 1.

“We were extending innings based on our poor defensive play and giving up four and five outs an inning because we can’t concentrate and focus,” he said. “That’s 100% the coaching staff’s fault.”

Ironically, the Aztecs lead the nation in most double plays turned with 50 and are almost guaranteed to “turn two” in every game, averaging 1.19 double plays per game, which ranks second in the NCAA.

When it comes to doubling up their opponents, the Aztecs are a sure fire bet to do so.

However, anything beyond that, not so much.