The Daily Aztec • May 5, 2019 • http://thedailyaztec.com/94620/sports/baseball-wins-back-and-forth-battle-against-san-jose-state-earns-series-victory/ 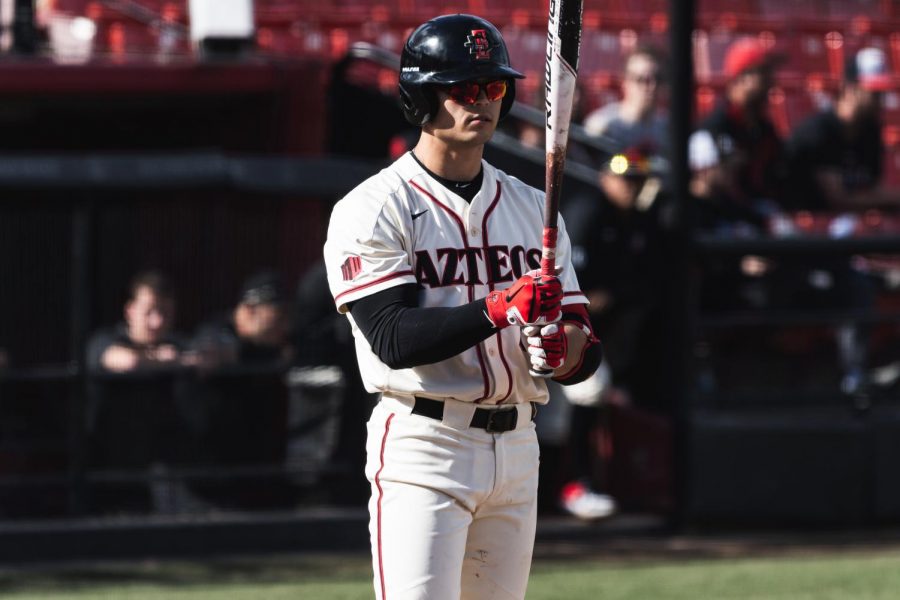 The Aztecs (28-19) secured a series win against the Spartans (19-28) while taking a one game lead for second place in the Mountain West Conference standings.

“We grinded out a victory and found a way,” head coach Mark Martinez said.

The Aztecs battled in a lengthy four hour and eight minute game in which Martinez made five pitching changes.

“We struggled on the mound all night,” Martinez said. “You get one of those weird games every now and again where our guys just couldn’t find the zone.”

After a scoreless first inning, with the Spartans leading 2-0, redshirt sophomore Chad Bible launched his fifth home run of the year over the left field fence to cut the deficit to one.

“Hopefully that gets me going for the rest of the way so that I can help contribute more,” Bible said.

“We just had to keep our calm,” Rudick said. “We had to trust our bats, (Maekawa) and me did a good job. We had to get hits and that’s what we did.”

Sophomore infielder Casey Schmitt walked with the bases loaded for the Aztecs, which brought Maekawa in for another run. The Spartans put a halt to SDSU’s scoring clinic after senior infielder Angelo Armenta lined out to right field but sacrificed to allow one final run in by Rudick.

SJSU fired back at the top of the third inning, as senior shortstop Aaron Pleschner’s two-RBI double along with junior designated hitter Blake Berry’s single sought the Spartans to retake the lead 6-5.

At the bottom of the inning the Aztecs pushed ahead of the Spartans by managing to once again set up runners across the bases with ultimately a throwing error from senior pitcher Tevin Cadola initiating another burst of offense for the Scarlet and Black as freshman catcher Deron Johnson took advantage to score.

Schmitt would follow with a single to center field that allowed Maekawa to run in from third. The bullpen for the Spartans committed a second error as Cadola threw a wild pitch from the mound that let Bible add to the scoring count.

Things would simmer down with the next two innings going scoreless before Spartans junior centerfielder Anders Davidson reached to first base off a 2-1 count. Berry seized the moment to come in at home plate and tally the final scoring run in the 7th inning.

The Aztecs face the Spartans for the final game of the series on May 5 at 1:00pm at Tony Gwynn Stadium.

“I give our guys credit,” Martinez said. “We’ll see how we do tomorrow. If we come out with some purpose and energy and intent then we should finish the weekend the right way.”