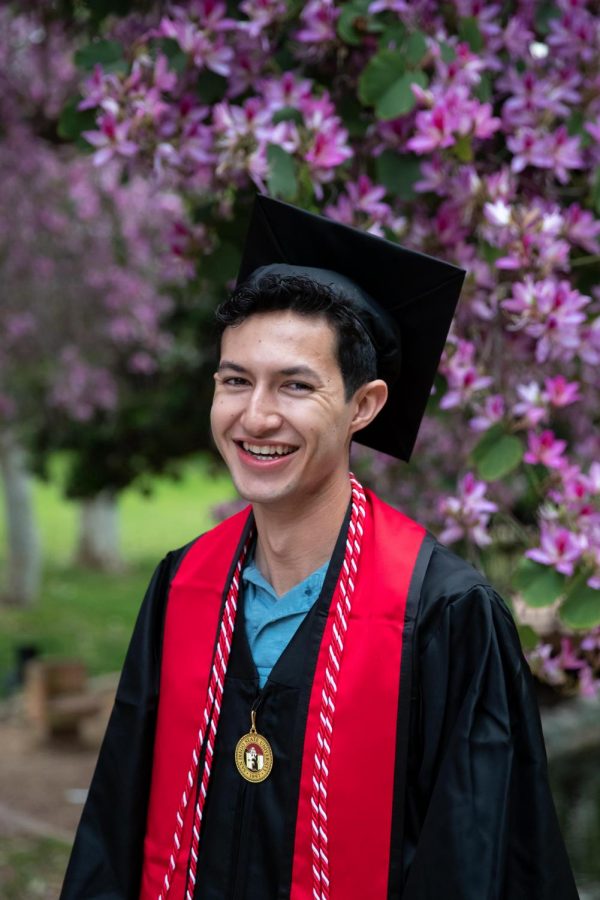 So I have absolutely no clue how to write this.

I know it’s such a cliché to say things like this, but if you had told me on Aug. 20, 2015, that I was going to be editor-in-chief of The Daily Aztec and that my last name would be a verb by the time my time at San Diego State was finished, I wouldn’t have believed you.

In a way, it was fate. When I was a kid, I remember my dad telling me about how one of his favorite TV writers, J. Michael Straczynski, had started off writing for The Daily Aztec. Years later, when I first visited SDSU with my mom, I had nearly forgotten all about that, but I had a feeling. I just knew I was supposed to end up here.

But the truth is, my first semester at SDSU, I felt pretty out of place on a campus that’s better known for its booze-soaked parties than anything else. I felt like something was missing. When I found The Daily Aztec the second semester of my freshman year, it gave me a purpose. For the last three-and-a-half years, this basement dungeon has been my home.

And there are so many fond memories this place has given me.

From Alex Piscatelli asking everyone about their love lives to Kelly Smiley singing opera in the office to that time Andrew Dyer accidentally sent the previous week’s newspaper to print, it’s been a fun, wild ride.

This last year I’ve spent as editor-in-chief has been crazy stressful, but it’s taught me lessons I will carry with me for the rest of my life. The most important one I’ve learned? Working in journalism, you’re going to make a lot of people angry. Oftentimes you’re going to make everyone angry. And that’s how you know you’re doing your job right. To Bella Ross, the closest thing I have to a protégé and The Daily Aztec’s next editor-in-chief: I hope that’s a lesson you take from me. It’s not our job to be liked. It’s our job to report the news.

And it’s no secret that I’m not much liked among the fraternities of San Diego State. To the boys of SDSU’s former Phi Kappa Theta chapter – it would have killed you to at least send me a photo of the poster of my face on the wall at one of your parties last year?

In all seriousness, I can honestly say there is not a single one of our school’s  Associated Students executive officers – current or former – whom I do not have the utmost respect for. Every one of you cares about this campus and the students on it.

But the point of a student newspaper isn’t to be student government’s cheerleader – that wouldn’t help anyone, least of all you – it’s to be its biggest critic. There is not one story I have published that I wouldn’t expect to have been written about me were I in your same positions.

I have no regrets, on that front or any other.

So thank you to everyone who has helped me along the way.

To my first editors, Jamie and Jacob, the dynamic news duo, for showing me how to, well, actually write a news story.

To Emely and Kayla, for making me a senior staff writer and letting me do 47 stories a week (yes, I’m exaggerating, but not by much).

To Andrew, for always pushing me to do more.

To Jocelyn, for being the yang to my yin.

To Aaron and Kemi, for providing countless production nights of entertainment. Thanks for being a good sport about making fun of you for being “problematic,” Aaron — sorry you made it into the Koala.

To Patty Rea, for helping me navigate the treacherous waters of editor-in-chiefing during our somewhat-bi-weekly meetings.

To Jay Harn, for being the person I’ve leaned on during my year as head honcho.

To Mike Sager, who gave me first non-Daily Aztec, journalism-related job, and who has always had faith in me.

To Kim Harris, who gave me my first internship at the Temecula Valley News.

To my mom, for giving me more unique experiences and perspectives at age 21 than some people get in their entire lives.

To my dad, who taught me right from wrong with a novel approach – Babylon 5, Star Trek, Marvel and DC. Without you, I never would have been interested in journalism, which is the closest thing to being a superhero I could find.

To Granny and Papa, for being the most supportive, loving grandparents I could ever have asked for.

To my Aunt Brooke, for being my second mom and being the person I know I can count on for anything.

To my best friend Ashley, for giving me a chance to get the hell out of The DA office once in awhile.

To my former stepmother, Kate. Every time you called me stupid or worthless, you made me that much more determined not to be. So really, you deserve my thanks, too.

And to so many more people who lent me a favor or a helping hand during my last four years here.

It’s a bittersweet feeling, writing for this newspaper that for the very last time. But I can’t think of anyone better to take the helm from me than Bella — and you know I don’t just say things like that.

That day your first year as a writer when you told me you literally chased Chukuka S. Enwemeka out of a University Senate meeting to get a quote is the day I knew you would be the one to fill my shoes when I was gone (even though he still refused to talk to you).

I know you’re going to do so many great things, and I can’t wait to see them.