The Daily Aztec • May 8, 2019 • http://thedailyaztec.com/94696/news/year-in-review-meningitis-outbreak-greek-life-suspensions-racism-on-campus/ 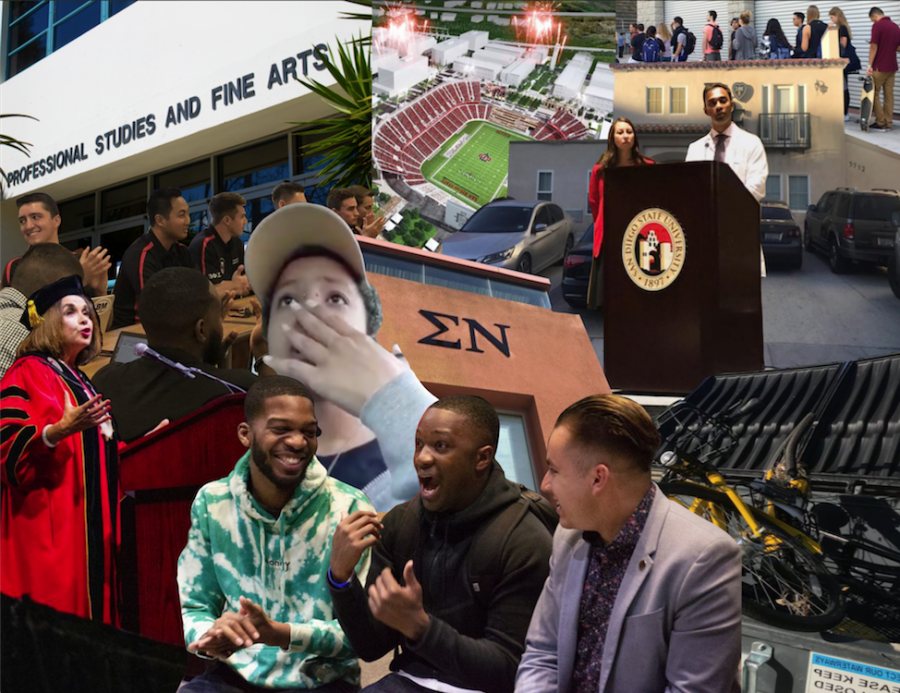 Meningitis Outbreak
One of the first big news stories of the year landed when a student attending sorority rush events on the weekend of Sept. 1 contracted meningococcal meningitis. By the end of the month, county health officials announced an outbreak of the virus with three cases hitting students in the months prior. What followed was a push for students to get vaccinated, filling Viejas arena for multiple days. The virus would strike again in mid-April after another weekend of Greek life events.

Frat Party Ban Ends, Hard Alcohol Ban Begins
The self-imposed fraternity social moratorium — or party ban — was a product of the 2017-2018 school year. After months of educational events, the Interfraternity Council unanimously voted to lift the ban in a meeting on Oct. 4. The meeting also resulted in a ban on hard alcohol, a move that was made to promote the safety of people attending Greek events.

Greek Life Suspensions
Not long after the social moratorium was lifted, the Greek system was hit with a slew of suspensions. On the weekend of Oct. 17, Kappa Alpha was placed on an interim suspension and Sigma Nu was kicked off campus by its national chapter, both due to alcohol-related incidents. An incident on Halloween night then resulted in two additional interim suspensions for Sigma Phi Epsilon and Alpha Phi.

SDSU West Beats SoccerCity
After a months-long battle over the rights to the Mission Valley stadium site, the SDSU West campaign took the final victory over the SoccerCity initiative, allotting the land for university use. The following months have seen the first steps toward the development of the land, including public forums and the assessment of the project’s environmental impact. Current plans include the development of university facilities, a new stadium, hotels, housing and many other amenities.

SDSU Ends Partnership with Ofo
Ofo, a trailblazer in what would become an expansive culture of dockless transportation on campus, was removed from campus in early November after the university said the company failed to fulfill its promises. The decision marked the early end to a pilot partnership with the company, which was supposed to last until Dec. 31. A.S. Sustainability Commissioner Cassie Weinberg said the bikes would too often end up parked incorrectly or completely trashed, leading SDSU to consider partnerships with other dockless transportation companies.

Racism on Campus
One of the biggest stories of the spring semester was the consistent incidents of racism on campus, many of which appeared to target the Black Resource Center. The first incident included a viral video where a non-student captured the sound of a racial slur being shouted by a group of passersby outside the BRC in early March. A little more than a month later, the BRC was quietly vandalized over a weekend resulting in $400 worth of property damages. Campus advocates organized during the following week in a rally outside Hepner Hall where they presented a list of demands they said SDSU would need to fulfill in order to stand against racial intolerance. However, the end of April would experience yet another racist incident after a man sent a Snapchat to a black student calling him a “monkey” and threatening to hang them like an “ornament” off a tree.

PSFA Shutdown
The debacle that was the shutdown of the Professional Studies and Fine Arts building on campus took over the latter part of the Spring semester. It started in January when construction on the building led to noxious fumes that caused occupants to experience symptoms such as nosebleeds and headaches. The building was officially closed to all use on March 13, with students occupying the building up until the last day. In an open forum on the matter, university officials said their communications on the odors were a “failure.”

Adela de la Torre’s Inauguration
April 11 marked the official inauguration of President Adela de la Torre, SDSU’s first female, Latina president. The two-hour ceremony featured an array of speakers, including CSU Chancellor Timothy White, and a speech for de la Torre herself outlining her vision for the future of SDSU. However, the ceremony came with a $162,000 price tag, a point that drew much criticism.