The Daily Aztec • May 7, 2019 • http://thedailyaztec.com/94753/news/vietnamese-pulitzer-prize-winner-visits-campus-to-discuss-the-sympathizer/ 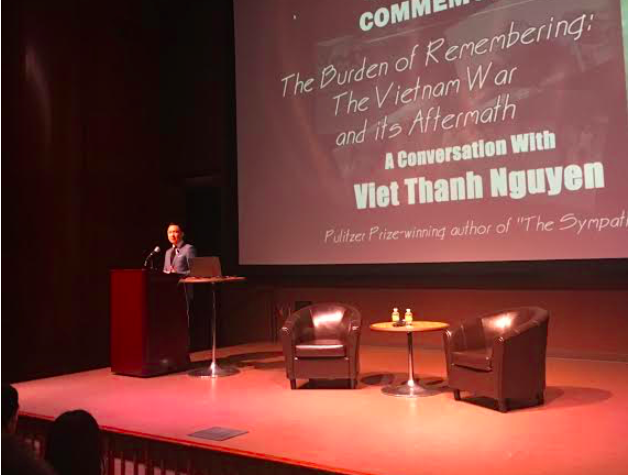 Author Viet Thanh Nguyen visited SDSU on April 30 to talk about his book, "The Sympathizer."

The Vietnamese American Youth Alliance held an event at San Diego State on April 30 hosting Viet Thanh Nguyen, the author of “The Sympathizer,” a New York Times Best Seller and recipient of the 2016 Pulitzer Prize.

Nguyen spoke about his experience as an oceanic refugee from Vietnam following the end of the Vietnam War. As America began pulling troops out of Vietnam, the communist forces of North Vietnam were able to take over the southern capital of Saigon in 1975.

In fear of what the Northern forces might do to the military members, government officials and civilians of South Vietnam, many fled the country, including Nguyen. The refugees escaped to other parts of the world, typically by fishing boats and other illegitimate forms of sea travel, giving these people the nickname “boat people”. The UN estimates 300,000 of the “boat people” perished at sea.

The duality of the lives of many Vietnamese-Americans who are the children of immigrants and refugees from the war is often characterized by a relatively comfortable living experience in the developed nation of America and a sympathetic pain felt for their parents who suffered from the war’s atrocities. Nguyen said he encourages this generation to continue practicing filial piety, a virtue of respect for one’s elders, and honor them by acknowledging their pain and sharing their story.

“If we don’t do that, who will acknowledge that pain and that history?” Nguyen asked. “We live in a country where most Americans know nothing about the Vietnamese people or about Vietnamese-Americans.”

In addition, Nguyen emphasized the significance of the new generation of Vietnamese-Americans to share their own personal stories. He said the experiences of this new generation are fresh and unique in their own sense, being a reason why he said he believes their stories are important to hear.

“Stories I’d choose to dwell on in my last few books have been about the past, the war and Vietnam,” Nguyen said. “But these are not the stories for us to tell. These are the preoccupations of my generation and older generations before me, but your generation has the need to speak up and tell your own story.”

Nguyen also touched upon the significance of acknowledging the Vietnam War as a complex narrative. The war created a diaspora of Vietnamese people throughout the world and the politics and calamities of the war materialized a wide range of perspectives on who was on the right side of history.

For Vietnamese-Americans in the U.S., the capturing of Saigon that took place on April 30, 1975 is denoted as commemorating “Black April” in which the event is typically perceived from a solemn light. In Vietnam, the event is viewed in a celebratory and victorious context. But viewing the war in black-and-white terms, Nguyen said, makes goals of reconciliation even more difficult.

Joseph Hoang, a senior studying history, said he thought there are a few necessary steps the Vietnamese community should be taking to heal.

“I think by understanding the complicated narrative, we can begin to reconcile these differences … that these traumas and these tragedies, we can make some sort of sense with them and we can heal from them,” Hoang said.

Kathy Doan, a senior studying business, said she thought it was important to attend events like this.

“Personally, as a Vietnamese American, I’m always seeking opportunities to learn more about the Vietnam War, the Vietnamese people’s’ immigration to America, and the stories of having to adapt to an entirely new culture,” Doan said. “It’s important events like these take place because it is not taught in classrooms.”