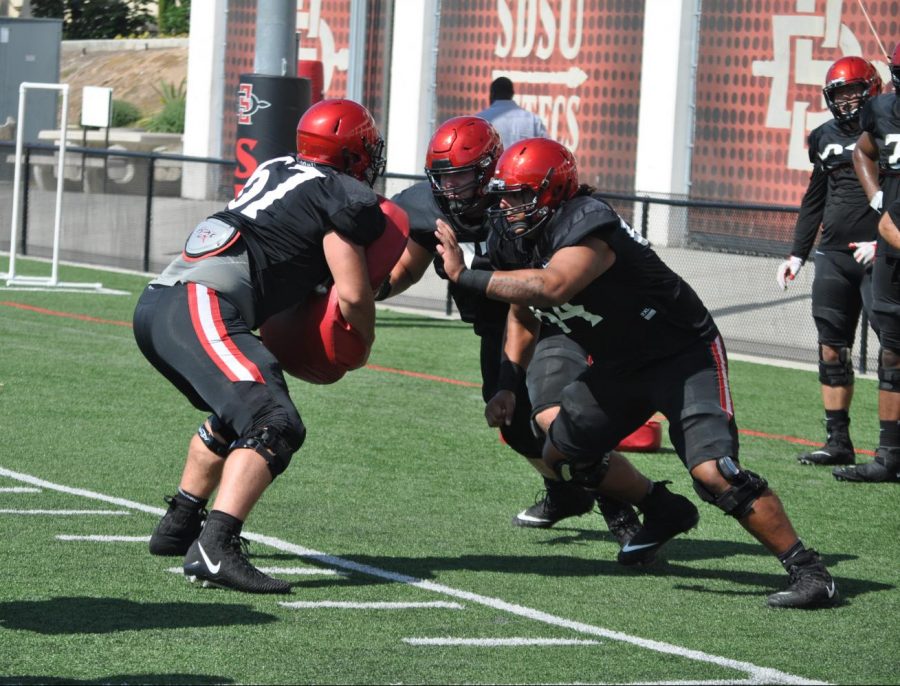 San Diego State offensive linemen work on a drill during a fall camp practice on Aug. 7 at SDSU Practice Field.

However, this list is highly tentative and can change drastically in a matter of four weeks leading up to the Aztecs’ first game against Weber State on Aug. 31.

“We got maybe 10 or 12 guys fighting it out to be the starters,” SDSU head coach Rocky Long said on Saturday after the team’s first fall camp scrimmage. “It’s way too early to determine who’s going to be the starters.”

Aside from senior Ryan Agnew at quarterback and senior Juwan Washington at running back, no one has been anointed as a starter in any position.

Even an offensive lineman like Ismael, who was a first team all-Mountain West selection in 2018, has not secured his starting spot.

With the dismissal of Tyler Roemer (now an Oakland Raider) at the end of last season, Spalding was given the opportunity to start the last three games at right tackle.  That gives him experience and momentum to start over junior Zach Thomas at left tackle. Thomas is coming off an ACL tear last September.. Long said the injury has caused Thomas to lose some size and weight.

For Thomas to win that starting spot, he will have to prove he has regained size and strength in these next couple of weeks. But for now, Spalding is the likely starter.

At left guard, Dixon seems to be the closest thing to a lock. The 6-foot-5 senior started all but one game at left guard. It’s hard to see someone like sophomore Desmond Bessent beat out Dixon who has started 25 games at left guard, dating back to 2017.

Center is where things get interesting. The top two centers on the depth chart are Ismael and Gudino who both return plenty of experience starting in SDSU’s offensive line in the last two seasons. Gudino was the starting center in last year’s opener against Stanford while Ismael was at right guard. Ismael started at center six times while Gudino started five times in 2018.

Ismael told The Daily Aztec he feels better playing center than right guard, so expect him to start there while Gudino joins the wide open competition at right guard.

The competition at right guard will also include Dunkle and senior grad transfer from BYU Jacob Jimenez.

A lot of talk has been about the 6-foot-5, 350-pound Dunkle possibly starting at right guard. Despite having the size to make an impact, Dunkle has yet to set foot in a collegiate game, so his lack of experience may potentially keep him from starting.

Despite being a fifth-year senior, Jimenez has not recorded the amount of playing time most at his age would have. In three seasons at BYU, the 6-foot-5, 300-pound lineman has only played in 15 career games – none of which he has started in. Jimenez was not on campus for spring ball, so he falls a bit behind in learning the playbook and a new offense.

Ultimately, Gudino and Dunkle seem to be the top two candidates to start at right guard. Gudino seems to have too much experience starting as a true freshman and sophomore to be regulated to second string. Although Dunkle’s size shows the potential he has to make an impact.

At right tackle, Capra is in the lead to start. The 6-foot-5, 315-pound transfer from Oregon arrives on the Mesa after graduating in three years and plans to use his final two years of eligibility at SDSU. He brings Pac-12 experience and 15 games played with one start. Capra participated in spring ball which gave him extra time to get comfortable with the Aztec playbook. Freshman Justin Yi is listed second on the depth chart. Yi initially joined the Aztecs as a tight end but switched to offensive line this past spring. He is unlikely to beat out Capra and the experience he brings to the table.