Outside Lands rolls into San Francisco 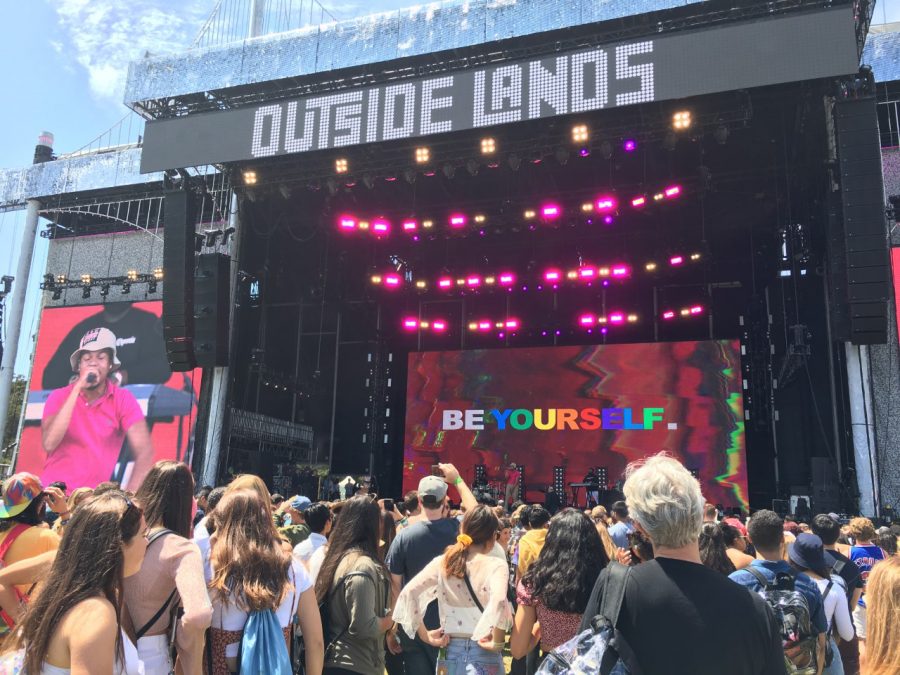 Taylor Bennett, Chance the Rapper’s brother, performed on the first day on the festival on the main stage, Lands End.

Outside Lands opened up in Golden Gate Park in San Francisco this weekend, in case you didn’t see all the Instagram posts. For most, it was a magical experience walking through the eucalyptus trees, listening to the lineup packed with alternative artists throughout the weekend.

Most people find festivals to be a  are a great escape from their bustling lives, and Outside Lands was no different. There was a Grasslands section for recreational marijuana use, along with Beer and Wine Lands. Giant mushrooms popped up in the Alice and Wonderland-themed Cocktail Magic section where people could try mixed drinks and eat food.

However, the main attractions could be found on the five stages spread out in the park. Lands End was the main stage with large performers such as Blink 182, Twenty One Pilots, Flume, Childish Gambino and more. The smaller Sutro and Twin Peaks stages didn’t disappoint with their own stars such as Kygo, RL Grime, the Lumineers and others.

Tarynn Huitt, a festival goer, was dancing around while waiting for Twenty One Pilots to start their set on the main stage.

“I’m most excited to see Twenty One Pilots, Flume and Judah and the Lion because they’ve been my favorite bands for so long, like since I’ve been in college,” Huitt said. “This is my seventh time seeing Twenty One Pilots.”

Many of the artists called on their audiences to love themselves and each other without commenting on anything outside of the festival sphere. Taylor Bennett, Chance the Rapper’s brother, performed on the main stage and said, “There’s a lot we need to fix outside of here.”

Half Alive and Childish Gambino both capitalized on having back-up performers. Half Alive had choreographed dance numbers while Gambino’s set featured singing choir members. Alina Baraz was accompanied by artists who painted on stage while she sang.

Twenty One Pilots delivered and put on a show by executing backflips off pianos and even featuring a crowd-surfing drummer. Josh Dun, the band’s drummer, had his drums on a platform the audience could hold up while he played. Tyler Joseph, the lead vocalist of Twenty One Pilots, said when they both started, he told Dun, “With my fashion and your backflips, we are going to make it.”

Shallou, a DJ who performed on the Twin Peaks stage, fit the uplifting message most artists supported when he said, “Thanks for coming out here and not being afraid to enjoy life and have fun.”

Gambino went a step further by dedicating time to the topic of loving one another. He had two rules during his set: Number one, love yourself and love each other. Number two, no cell phones because he wanted people to live in the moment.

“The Bay makes you understand how close and separated people are,” Gambino said. “You go over a bridge and everything changes. We are all just people. I like these shows because I get to see the future right in front of me.”

Then on Sunday, Paul Simon closed on the main stage while Kygo closed on the Twin Peaks stage. Both artists were the last to play for the whole festival.

Outside Lands itself is an alternative, hipster world filled with fun fashion, quiet fog and music that falls further from the mainstream than other popular festivals. The vibe was really down-to-earth until Lil Wayne came on and all the 12-year-old kids started moshing.

Art was prevalent almost everywhere you went. There were huge graffiti murals, small sculptures, live painting and other details strewn throughout the venue. The lockers were even brightly colored green, orange and pink.

One thing you can’t have a festival without is the food. There is no re-admittance after you leave the festival, so all food and water must come from inside the gates. The positive side is the food is delicious. The negative side is that a small plate of fries is $10. And let’s not forget the drinks. One beer cost $12.

There are tons of options to choose from such as vegan food, glass noodles, deep-fried Oreos, burgers, boba, popcorn shrimp and the list goes on. And if eating food wasn’t enough for you. The Gastro Magic stage held cooking shows where some of the musicians would come up and cook with professionals.

Because it is such a hip scene, everyone had on their most eclectic and trendy clothes. Thrift finds and alterations were very important additions to the funky fashion trends. Seventies bell bottoms and psychedelic patterns made an appearance alongside nineties styles such as plaid and retro clothes.

Festival-goers danced around in overalls, cheetah print, fringe, neon pants and stripes. Some of the must-have items were clear backpacks, blankets and hats.

“I wore this because I wanted to be wild and free,” Williams said.

Swalwell was a little more rushed in her decision, “I was running late, so I just threw it on. I got the yellow jacket to take to Burning Man, but yellow wouldn’t work because of the dust.”

There were more understated pieces to the festival. Flowerlands was near the Twin Peaks stage where the North Bay Flower Collective was celebrating local flowers and educating people about flowers from overseas.

Pascals Huber, a volunteer, said, “Your children shouldn’t be smelling roses from overseas because it’s bad for you. We are here to spread local organic flowers.”

Another effort made by Outside Lands to better the environment was its contract with Clean Vibes. The festival was able to divert 92% of its waste by composting, recycling and reusing items like utensils, cups and water bottles.

“We are trying to keep the park as clean as possible,” Jake Barnes, a Clean Vibes Trash Talker. “We are hoping to keep landfills empty and compost as much as possible.”

One of the best parts is to be able to walk around in nature and hear music wherever you go. With all of the music on the radio and on apps, it’s amazing and refreshing to hear live music.

Outside Lands had all ages, all races, all genders, all orientations and all kinds of people there. It was a beautiful collective of a love for music that represented the light-hearted side of San Francisco.