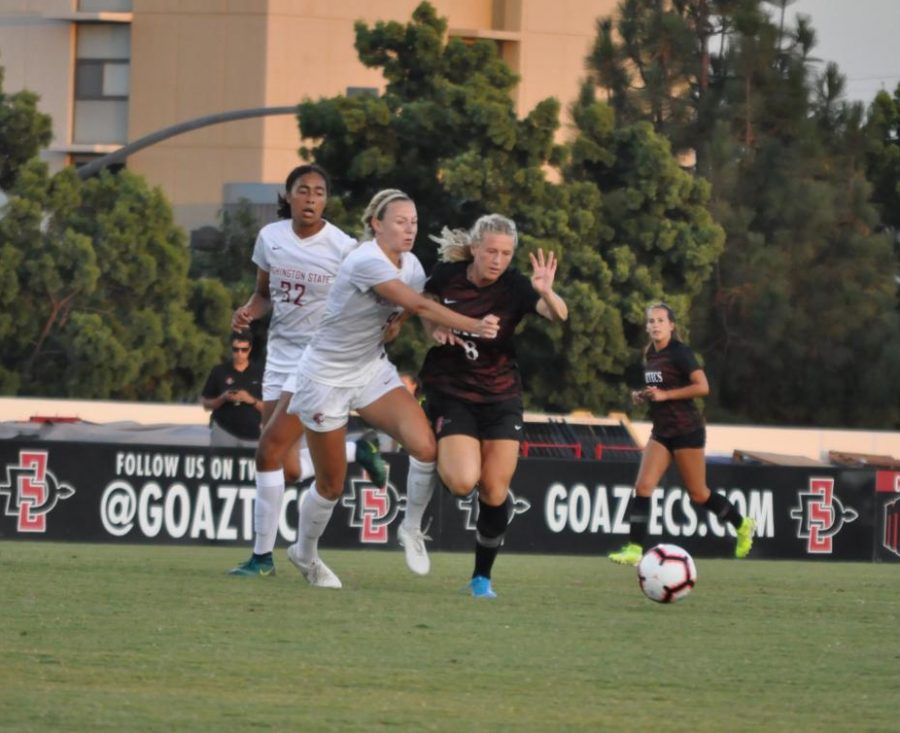 Junior midfielder Chloe Frisch attempts to dribble the ball past a defender during the Aztecs' 5-0 loss to Washington State on Aug. 16 at the SDSU Sports Deck.

San Diego State women’s soccer was defeated 5-0 by the Washington State Cougars in a preseason exhibition on Friday night at the SDSU Sports Deck.

Washington State got off to a fast start in the first half, scoring three goals on 11 shots – two of which were scored by Cougars senior forward Morgan Weaver.

The second half proved to be equally troubling for the Aztecs as the Cougars scored two goals on five shots.

SDSU’s offense, on the other hand, struggled to find the back of the net – only managing to put up six shots and having nothing to show for it on the scoreboard.

“We had some good moments, we connected the ball well, we just got out-hustled at times,” sophomore forward Laura Fuentes said.

Head coach Mike Friesen said there were some areas where his team could have been better.

“We weren’t as dangerous as I would have liked,” Friesen said. “Some of that’s a little bit of patience, some of it is because we’re missing a few strikers. There was a little bit of a lack of creativity.”

Friesen said the Aztecs also had their struggles on defense.

“We made some critical errors to give away some goals,” Friesen said. “The first one we left somebody wide open in the back post; the third one was us in possession finally getting a hold of the game playing the ball backwards and turning it over to our center backs.”

Miscues were a common occurence on Friday night for the Aztecs, as four of the five goals conceded were unassisted efforts.

The Aztecs lost more than just a game, however. Junior forward Mia Root went down with an injury early in the second half and did not return for the remainder of the game.

According to Friesen, her injury is not currently known, but a timetable for her return could be “long term.”

Senior defender Arianna Robles discussed how important it is for the team to be behind Root through this injury.

“It’s very important for us to be behind her, rally her up, and don’t let this bring her down,” Robles said.

Root has scored 11 career goals for the Aztecs and was named to the Mountain West All-Newcomer Team her freshman year.