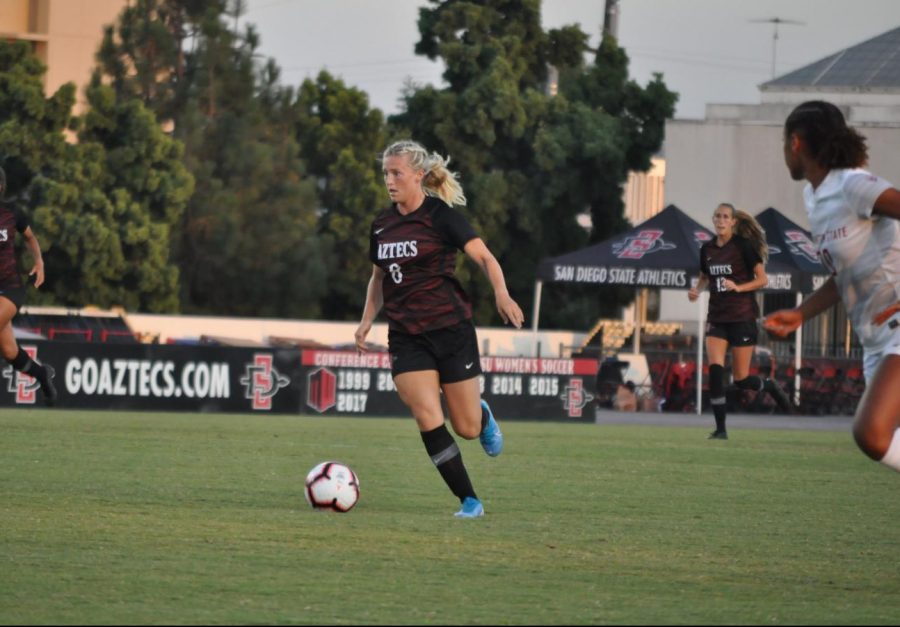 One main advantage any team can have against its competition is having an experienced and familiar squad.

For San Diego State women’s soccer, it’s that familiarity the team will rely on to find success this season.

The Aztecs will have eight returning starters stepping onto the pitch for the 2019 season.

SDSU was ranked fourth in the Mountain West preseason rankings, even receiving two first place votes from the committee.

In those games, the Aztecs’ offense found the back of the net 21 times.

To find an improvement in the offense, SDSU head coach Mike Friesen will look to players like junior midfielder Chloe Frisch and 2018 Mountain West Newcomer of the Year Laura Fuentes to lead the charge.

“(Fuentes) and Chloe are the engine of our team,” said Friesen.

Last year, Fuentes and Frisch led the Aztecs with seven and eight points each, respectively.

Fuentes looks to replicate her award-winning efforts last season and become a more aggressive striker for the Aztecs.

“I’m trying to get a couple more goals in, get more involved in the attack, score some more goals and honestly help the team with more assists,” said Fuentes, who scored three goals and one assist in 2018.

Friesen echoed her sentiments and said he would like to see Fuentes become more of a scoring threat.

“She’s just a very good soccer player,” Friesen said. “What I would love to see from her this year is expand her game into being more of an attacking threat, not just a playmaker central, we want her to open that up as well.”

Part of the reason Fuentes will have to be a bigger offensive threat this season draws from the loss of junior forward Mia Root, who suffered an injury in the Aztec’s lone preseason match against Washington State.

According to Friesen, her timetable for return is “long term” at the moment.

Root has been an important piece for the Aztec offense in her time at the Mesa, scoring 11 goals and five assists in her collegiate career.

Defensively, SDSU looks to improve upon 2018 in which it allowed 128 shots on goal and a total of 28 conceded goals, ranking third to last place in the Mountain West.

Part of the issues behind those numbers comes down to goalkeeping, which the coaching staff managed to address with two new keepers on the roster, along with an active redshirt.

Friesen named Lisowski as the starter for Thursday’s opener against Texas Tech but also said he will continue to evaluate his options.

SDSU has plenty of potential for the upcoming season, and the team is not afraid to boast its confidence.

Fuentes said one word when asked about what she is excited about this upcoming season.

The Aztecs will look to put that confidence to the test when they face the 22nd ranked team in the country, Texas Tech, on Thursday Aug. 22 at 7 p.m. at the SDSU Sports Deck.