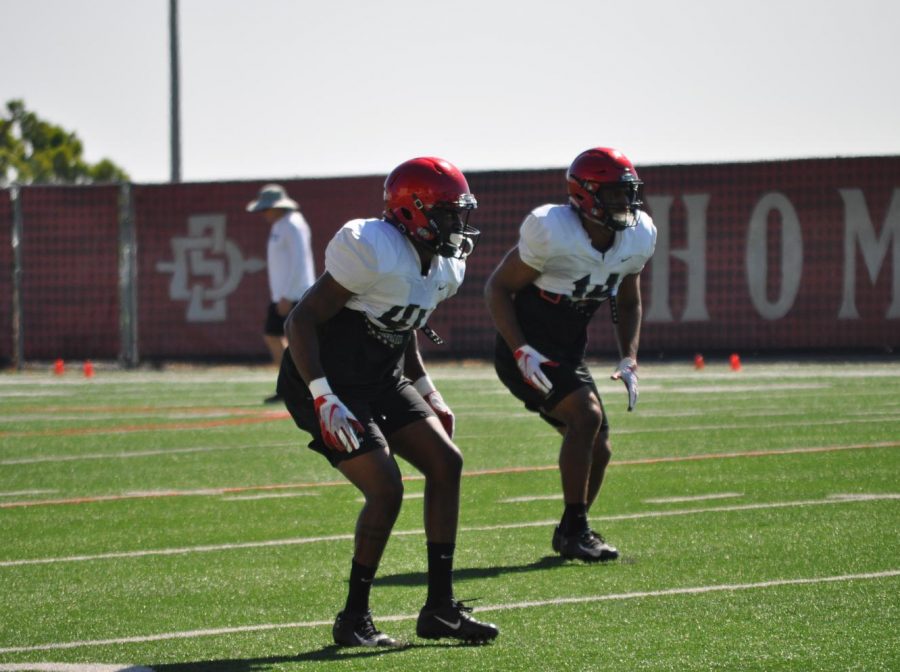 Senior Luq Barcoo and sophomore Darren Hall are expected to be San Diego State football’s starters at cornerback in the season opener against Weber State on Aug. 31.

However, question marks linger around safety in regards to who is going to start and in what position.

In head coach Rocky Long’s 3-3-5 defense, there are three safeties instead of the usual two in most defensive schemes. They are called boundary warrior, Aztec and field warrior.

Long wants to solidify where his safeties are playing instead of having players like senior Kyree Woods rotate and learn three different positions.

“We have to decide sooner or later where they’re going to play because I don’t think they’re honing into the right way to play there because there’s five or six of them back there playing all three spots,” Long said. “We have to decide pretty quick and let them get solid in what they do instead of moving them around that much.”

The problem in deciding soon is no safety impressed Long in Saturday’s scrimmage during the annual Fan Fest at SDCCU Stadium.

“I didn’t see anything exciting from them in any spot,” Long said.

Well, that doesn’t make the decision-making process any easier.

It also doesn’t help when junior Taylor Hawkins, who has taken plenty of first-team reps throughout camp, was in concussion protocol.

For now, the candidates to be the starting boundary warrior are Hawkins and junior Trenton Thompson. Both return plenty of experience at that position as Thompson started nine times (57 tackles, one interception, two pass breakups) and Hawkins started four times (35 tackles, five pass breakups).

Interestingly enough, the two battling for that starting spot were teammates at Palm Springs High School.

At the Aztec position, junior Dwayne Johnson Jr. is the likely starter, although he only has one career start which was back in 2017 against Hawaii. With his 6-foot-2, 215-pound frame, Johnson Jr. has the size to play the Aztec position that is almost a hybrid of middle linebacker and safety – which Parker Baldwin started in every game of 2018. The listed backup on the depth chart is sophomore Rashad Scott who has yet to fully participate during fall practice due to health, so it’s unlikely he starts over Johnson Jr.

The field warrior is the closest position to a lock. Junior Tariq Thompson already has 26 career starts with seven career interceptions and is a two-time 2nd Team All-Mountain West selection.

For the moment, senior Kyree Woods is the odd man out. He started 10 games last year at cornerback but made the transition to safety in the spring. The Arizona native has taken reps from all three safety positions during fall camp. His experience could ultimately put him over the top to start over Johnson Jr. at Aztec and Hawkins/Trenton Thompson at boundary warrior. These remaining fall practices will determine if Woods gets inserted in the starting lineup.

“I’m just trying to get a good feel for it. Definitely doesn’t matter as long as I’m there for my team regardless of what position I’m in,” Woods said of his transition to safety. “I’m playing all three right now to create depth in our secondary – what we didn’t have last year. (I’m) just trying to focus wherever I can fit in.”

The clock is ticking, and Long will have to make a decision soon for those five starters to build chemistry in the back end of the defense.

No matter who’s going to be out there, a goal of the SDSU secondary is to create more turnovers.

Hall and the secondary want to create more game-changing plays.

“Turnovers are a huge part of the success we’ve had in prior years,” Hall told The Daily Aztec. “Forcing turnovers and giving the ball back to our offense on a short field will always help us put points on the board and keep the opposing team out of the endzone, ultimately leading to more wins.”