Aztecs, in defensive battle, gut out 6-0 victory in season opener against Weber State 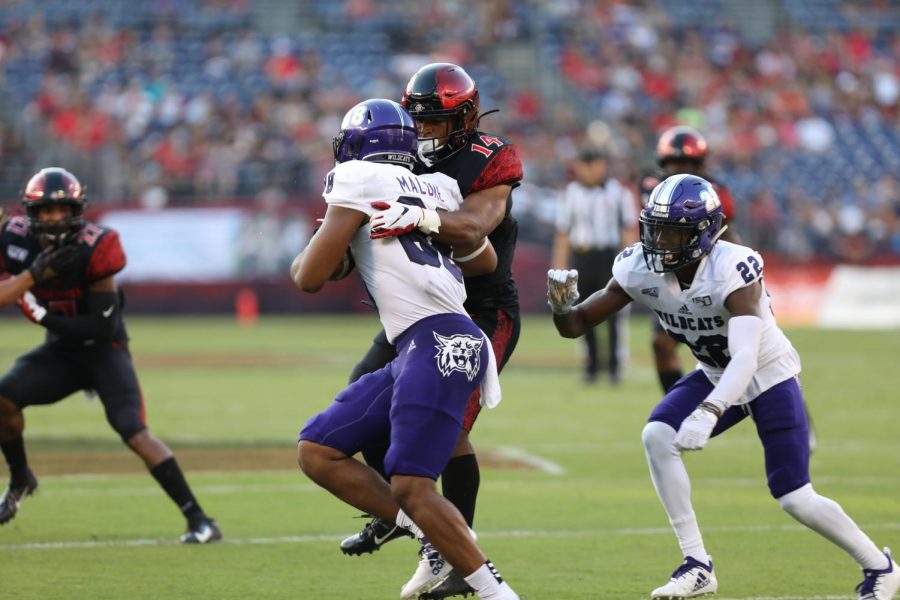 On the first play of the fourth quarter, San Diego State senior quarterback Ryan Agnew escaped two defenders and threw across his body – while running towards his own sideline – for a 12-yard completion to sophomore tight end Daniel Bellinger.

The third down conversion led to redshirt freshman kicker Matt Araiza drilling his second field goal of the game to give SDSU a 6-0 lead with 10:51 remaining.

Agnew said although the play was a success, he will probably be advised to avoid that situation again.

“I think we’re going to look back at it on film and it’s going to be like ‘don’t do that again,’” Agnew said. “It’s cool when it happens, and it works out for you. If it doesn’t, it’s a lot worse.”

Six points were all the Aztecs (1-0) could muster, but it was enough to seal a 6-0 season-opening win over Weber State on Aug. 31 at SDCCU Stadium, which was the lowest scoring game in the school’s Division I history (since 1969) .

SDSU head coach Rocky Long said the offense looked as ineffective as he’s seen in a while but that he is satisfied with the win.

“That was about as ugly an offensive performance as I’ve been around for a long time,” Long said. “But the objective is to win the game, and we found a way to win the game.”

The performance was SDSU’s first shutout since Nov. 11, 2016 when the Aztecs defeated Hawaii 55-0. The Aztecs only allowed one Wildcats’ play in their own territory, which was from the 43-yard line.

With three minutes left and down by six points, Weber State had a chance to score a go-ahead touchdown from its own 35-yard line. Aztecs junior defensive back Tariq Thompson intercepted Weber State junior quarterback Jake Constantine on the drive’s first play.

The interception was Thompson’s only one of the night but said he should have had another one after getting his hands on a couple passes earlier.

“It felt great getting one,” Thompson said. “But I’ve got to capitalize on the other opportunities, and I know I can, so it’s just something I’ve got to improve.”

Thompson, on the following Weber State drive, sealed the game on 4th and four with 1:29 remaining – swatting the ball incomplete and forcing a turnover on downs.

Thompson was helped in the secondary by junior defensive back Dwayne Johnson Jr., who led the Aztecs with 12 tackles, including 1.5 for a loss.

SDSU senior defensive back Kyree Woods was slated to start at safety but was moved to cornerback due to a hip flexor injury suffered by sophomore cornerback Darren Hall on Aug. 27, according to Long.

Weber State was held to just 154 total yards, and the Aztec secondary and defense as a whole had plenty to do with that.

Wildcats sophomore running back Josh Davis, who is the reigning FCS National Freshman of the Year, only collected seven rushing yards on eight attempts.

However, the Aztecs’ run game wasn’t much better.

The Wildcats managed to convert only five first downs, compared to the Aztecs’ 14.

The game resulted in 19 punts, nine of which came from the foot of SDSU senior punter Brandon Heicklen.

Just before halftime, Araiza went on for what would have been his second field goal attempt. Heicklen muffed the snap, giving Weber State possession with 24 seconds left.

Long said his players told him Weber State players were calling out the Aztecs’ snap count.

“When they moved the defensive line, they were using our snap count, which is illegal,” Long said. “But if the officials can’t hear it, they can’t call it.”

Following Araiza’s first field goal in the second quarter, Weber State junior wide receiver Rashid Shaheed returned a kick for a touchdown on the ensuing kickoff, but it was called back due to a holding penalty on defensive end George Tarlas.

That one play could have equalled the same amount of points SDSU scored all night, and the Aztecs were fortunate to have the penalty flag thrown in their favor.

Entering halftime, the Aztecs held a 3-0 advantage over the Wildcats.

The Aztecs opened the second half with a three-and-out on defense, followed by an 18-yard run from Washington on the Aztecs’ first play. The carry marked Washington’s longest run of the night.

Washington was spotted limping to the locker room with an ankle injury after the Aztecs’ third drive, but returned late in the second quarter and played the rest of the game.

The Aztecs will head to the Rose Bowl on Sept. 7 to take on UCLA, where they will attempt to defeat a Pac-12 opponent for the fifth time since 2016 and secure their first win against the Bruins in 23 total contests.