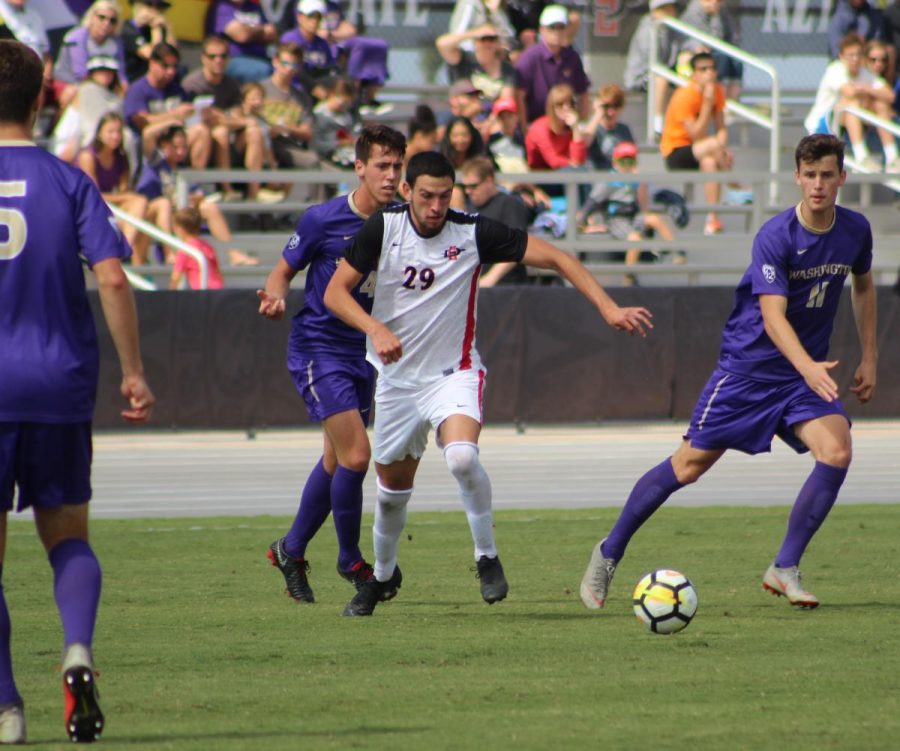 Then-junior midfielder AJ Valenzuela chases after the ball during the Aztecs' 2-1 loss to Washington on Oct. 7, 2018 at the SDSU Sports Deck.

The Aztecs miss out on being crowned winners of the Courtyard San Diego Central Aztec Soccer Classic for a second year in a row.

“Detroit Mercy was extremely competitive. They fought, grinded, kicked and made the game absolutely miserable for us,” head coach Lev Kirshner said. “We have to be better as a Pac-12 team. At the end of the day, there’s no excuses for us.”

The Scarlet and Black outshot the Titans 16-9 but couldn’t figure out a way to score against a clever and quick-witted counterattack from Detroit Mercy.

“It was sharpness in the end and hunger for goal that made the difference,” Kirshner said. “The quality in our finishing wasn’t there.”

SDSU looked almost certain they were going to get a goal in the first half. After producing nine shots and two corners, the Aztecs kept pressing but couldn’t show anything for it.

A teaser came in the 25th minute when senior midfielder Pablo Pelaez whipped a free kick into the net from 40 yards out only to have officials wave it offsides moments later.

Before halftime, senior defender Miles Stray was close to scoring off a corner kick but hit the post, leaving the game scoreless after 45 minutes.

“We need to be more focused,” senior defender Mac Clarke said. “The offense is doing an incredible job. Everyone has to be switched on and continue to push.”

The Aztecs broke through in the 58th minute when senior midfielder AJ Valenzuela made a run into the heart of the Titan’s defense.

As two defenders closed in on Valenzuela, he faked right footed shot and switched to his left leaving both men in the dust.

The shot was perfectly struck and curved into the bottom left corner.

“At halftime, coach asked me to find pockets of space in the middle,” Valenzuela said. “When I noticed both defenders were committed, I cut back and saw an opening to take a shot.

The Aztecs faced adversity in the 70th minute when freshman midfielder Hunter George was given a red card.

Kirshner’s side was forced to play with 10 men for the final stretch of the game.

“Our formation and tactics had to change,” Valenzuela said. “We had to sit back and absorb the pressure to then try and hit them (Detroit Mercy) with counter attacks.”

The Aztecs did everything they could but ultimately were unable to keep up with the pressure from the visitors.

Detroit Mercy adjusted its strategy and found success inside in the final 15 minutes.

The Titans scored three goals in the second half and handed the Aztecs their second loss at home.

“We can’t keep bleeding goals against our opponents and expect to win,” Kirshner said.

SDSU now faces a five-game road trip that starts with a matchup against the Santa Clara Broncos on Sept. 14 at Buck Shaw Field in Stevens Stadium.