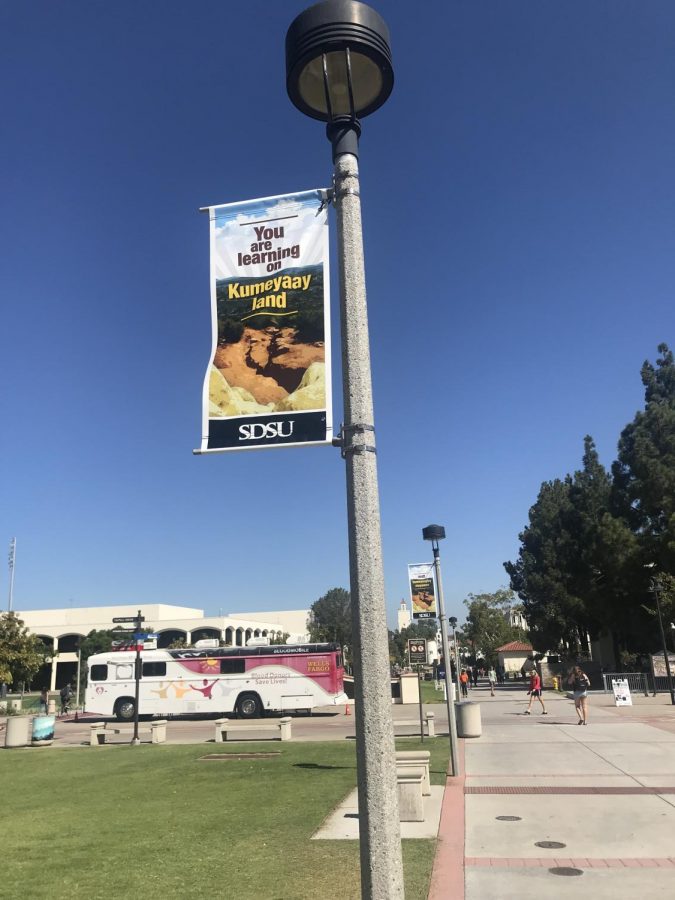 San Diego State’s Native American Student Alliance has collaborated with the university on initiatives to better recognize the native and indigenous population on campus.

The proposal was officially approved last spring, and NASA is now planning for the future opening of the resource center.

“Within the last semester, as the president was transitioning into the office, she wanted to do more to support the native community, so we submitted a proposal,” Yazzie said. “Through the resource center, we would have different opportunities to figure out what else we need to do for students on campus.”

Yazzie said NASA is a culturally-based organization that supports native and indigenous-identifing students.

“Overall, our mission is that we’re here to represent native students, invite and unify the native campus, as well as non-native students to learn about our culture and history,” Yazzie said.

In recognition of this decision, banners were hung along Campanile walkway. Written in both English and Kumeyaay, the banners read, “You are learning on Kumeyaay land.”

“We met with administration to establish these banners because they wanted to celebrate that the resolution would be passed and share with the student population that this is Kumeyaay land,” Yazzie said.

NASA Secretary Skylar Beasley said the Kumeyaay people make up most of the 19 native tribes in San Diego.

“The Kumeyaay people are indigenous to San Diego,” Beasley said. “There are many different classifications under Kumeyaay, but the Kumeyaay population is largely in San Diego and also goes into Mexico.”

“I’m Kumeyaay, which is partially why I’ve been very involved in the Kumeyaay efforts because I’m one of the only Kumeyaay on campus,” Beasley said.

Yazzie said representing their people and community is necessary because it’s a very small community, making up less than one percent on campus.

“Because our demographics are very small, we’re very close and very family-oriented, and we know all the other natives on campus, even faculty, staff and administrators who are native,” Yazzie said. “In addition, we have a great opportunity to really advocate for our own selves.”

“We want to really make our presence known, that we’re here and we’ve survived colonization with resiliency, and (we’re) really figuring out how we can connect our communities who have been affected by colonization,” Yazzie said.

On top of Indigenous Peoples Day, November is the nationwide official celebration for natives, highlighting a series of important events that bring together the native community, Yazzie said.

“All throughout the month, in collaboration with the American Indian Studies Department, we collaborate by doing workshops and socials with the goal to center our native voices, students (and) community members,” Yazzie said.