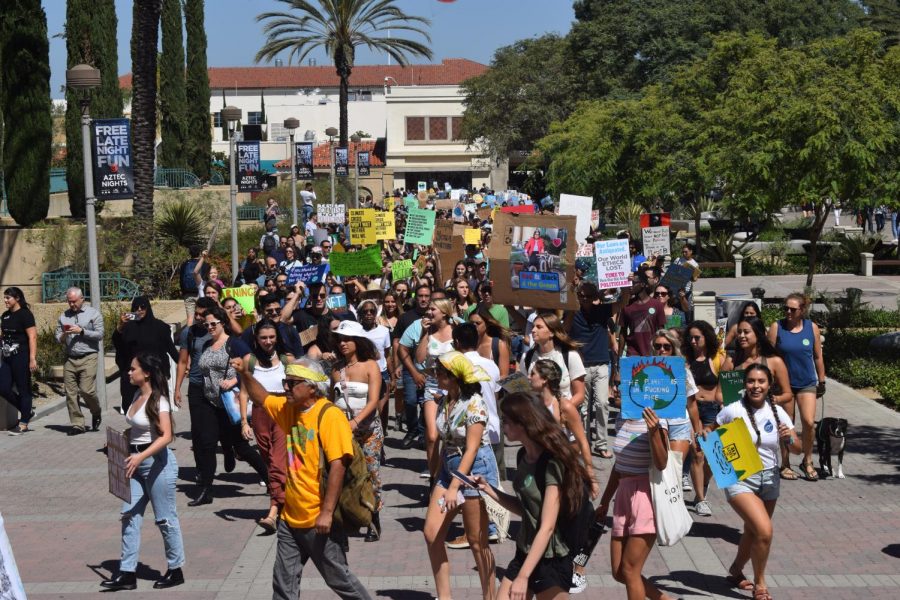 The SDSU community marched as a call to action for climate change.

Students, faculty, alumni and community members gathered in front of Hepner Hall at 11:30 a.m. to march throughout the campus. Participants of the march chanted and carried handmade signs in favor of climate justice.

The march’s finale features an array of speeches given by student organizers, staff members and congressional candidates.

“At SDSU, we feel that our climate action plan is not enough for what we need to achieve by 2030,” international studies and business senior and Lead Climate Strike Organizer Sarah Karver said. “So we really wanted to get carbon neutrality into our asks to make sure that climate is a priority moving forward.”

According to the event’s Facebook page, students’ participation in the Climate Strike was focused on asking the current administration at SDSU to reach carbon neutrality by 2030, creating a Chief Sustainability Officer position in President Adela de la Torre’s office and ensuring the SDSU Mission Valley campus will be carbon neutral.

Many of those involved saw the Climate Strike as a way to take small steps towards bigger changes.

“We have to be loud and get the university to listen to us, you feel like you don’t know what to do about the Amazon on fire, but you can come to your school’s climate strike,” environmental and physical geography senior and Logistics Coordinator Taylor Campbell-Mosley said.

The turnout at the strike and the enthusiasm of those involved left some of the attendees feeling as though the future is in good hands.

“I’m hopeful,” Campbell-Mosley said. “Sometimes it feels like you’re alone but when you see students, staff, faculty, community members here listening and cheering, and the administration here wanting to talk to us, I definitely think there is going to be change.”

The strike reached such large proportions that two candidates running in the Democratic primary for U.S. House California District 53, Joaquin Vázquez and Sara Jacobs, attended and spoke at the event.

“We’re supporting the students and we’re standing hand-in-hand with everyone so we can make that call to action to people in Washington, so we can finally have the courage and the backbone to stand up,” Vázquez said.

For many students, the issue of climate change is one they see having a direct effect on their lives.

“It’s not something that we need to worry about 10 years from now, it’s something that needs to be addressed now,” social psychology graduate student Henry Lopez said.

The negative reality of climate change is what has pushed many students into action.

“It’s sad because I don’t really consider (having kids) as much because I don’t want my kids suffering in 30 years from now,” said political science sophomore Janel Pereyda.

However, the Climate Strike was an opportunity for members of the community to have their voices heard.

“I feel like political figures or even the SDSU board don’t always take us into consideration, they don’t take it as seriously but we’re not going to listen anymore,” Pereyda said. “You should listen to us, we’re here for a reason.”

Other participants in the strike also shared ways in which individuals can make positive environmental changes.

“Considering we have lead the world in polluting the climate, I think that we need to take the lead role in solving the climate crisis,” Senhen said. “We need to all take action.”